A Beginner’s Guide to Retribution of Skyrah

You are here: Home › Tactics › Warmachine › A Beginner’s Guide to Retribution of Skyrah

Do you like elves? Do you like vengeful elves trying to KILL ALL HUMANS? What about some of the most unique rules combinations in all of WarmaHordes? If you said yes to any of those come on over for my overview of Retribution of Scyrah! Check the Tactics Corner for more great articles!

Hey guys, this week we look at Retribution of Scyrah, a fringe organization dedicated to the extinction of human arcane sciences, and all those who seek to protect them. Their Warcasters wield esoteric abilities to bring mages into the light, and turn them into used pin cushions! Their Warjacks have some of the most unique abilities in all of WarmaHordes, and their infantry is a panoply of combined arms specialists capable of just about anything you could want. Let’s dive in! 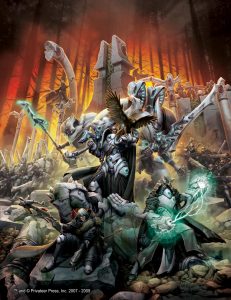 A long isolationist kingdom Ios is the last intact nation of elves within Immoren. The Elven people in Warmachine are a technologically advanced race with an unparalleled understanding of the melding of magic and mechanics, practitioners of this art/science are called Arcanists. With the rise of magic within the human kingdoms of Immoren, the elves’ Gods began to die. Now when I say their Gods are dying, I don’t mean in the Nietzsche’s sense of them becoming irrelevant, but the very real sense where Gods who gave them the technology and magic they command… personally… are in their death throes, and the Elven people see this as the precursor to the extinction to their race.

Now a formerly fringe group dedicated to the extermination of all human magic has effectively taken control of the government, and is waging full scale war to “KILL ALL HUMANS!!”

The Retribution of Scyrah has a very precise style of fighting, from pulling out enemy Warcasters and killing them on turn 2, to a combined arms approach, to an insufferable gunline, to brick to the face style play, this faction is capable of many different strategies 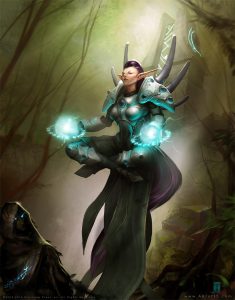 The Warcasters in Ret. do everything, they’ve got force magic users, time magic users, assassins (personal and force enabling), buff bots, you name it they do it. 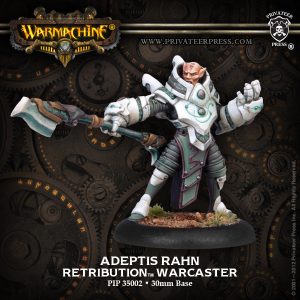 Our first ‘Caster we’ll look at is Adeptis Rahn, the toolbox caster! His feat, Arcane Alignment, boosts the range, accuracy, and hitting power of magic attacks within his control area. Its straight forward, effective, and works best with a couple units of Battle Mages who can abuse this feat nicely.

He has 4 notable spells, force blast, force hammer, polarity shield, and telekinesis. Force Blast is used on a friendly model in his control area and pushes close in models away, its great for messing with charge lanes, and controlling positioning on the board. Force hammer shoots an enemy model and slams it away from the origin point. Telekinesis places enemy models in a different spot to draw them out, and polarity shield stops the affected model/unit from being charged or slammed, if the enemy model starts in your model’s front arch.

In short, Rahn and his army come up, move the guys protecting your caster away, then pulls your caster out and kills him, or messes with positioning and rigs your opponent’s positioning so they lose out on utilizing parts of their force.

It’s good, it sucks to play against, trust me. 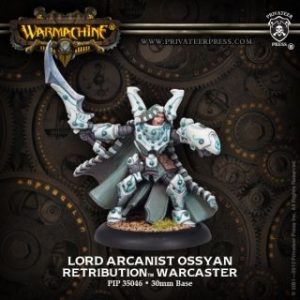 Our next caster being discussed will be Lord Arcanist Ossyan. He has a gun that debuffs your opponent’s speed and defense, he has field marshal future sight, so his battle group can choose whether to boost attacks after rolling.

His spells are most notable, admonition, fortune, quicken, and shatter storm. All upkeeps, which makes him vulnerable to upkeep removal and lamentation, but who plays Menoth anymore?

Admonition is always good, if an enemy model ends its movement close to the model with this on it, it moves away, or in the way, simple, very annoying. Fortune allows the model/unit with the spell to re-roll attack rolls, so good. Quicken, speeds up and increases the defense of the targeted model/unit. Shatter Storm is really fun, if the model/unit boxes an enemy model it blows up and causes magical damage to the guys around him!

Ossyan is the premier gunline caster in Ret, and with that feat, who couldn’t be? 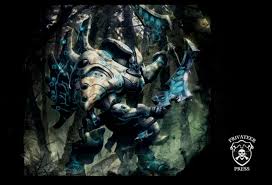 Warjacks in Retribution come in two varieties, Shyeel and Vyre. Shyeel ‘Jacks have force fields and play around with force in various ways on the battlefield. Vyre ‘Jacks use, and mess with, magic in much more direct ways, from the Banshee having the ‘Wailing’ ability which takes away casting spells and unit orders within range of the ability, to the sphinx with a ‘Psychic Relay’ on its cannon meaning that the spell range of friendlies targeting the guy hit have an extended range, very cool! 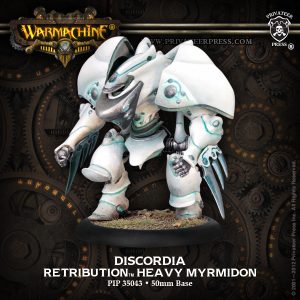 The ‘Jack I chose to hone in on is Discordia, Rahn’s bonded ‘Jack. Disco is made by House Shyeel, so she has a force field, and she has two very scary abilities, which make her simultaneously ubiquitous and disdained. Her 10 inch spray magical gun has brain damage, which takes away casting spells from opponents hit for a round. Her imprint is ‘Kinetic Field’ which means she can put up an aura that buffs the armor of those close in against ranged attacks and makes them immune to blast damage.

If you play Ret., buy her, field her. If you don’t play Ret, know her card, and, now this is important… Keep your caster at least 16.5 inches from her at all times!

If this wasn’t clue enough, I’ve been touched in some bad places by Disco… oh Sevy 1 :’( 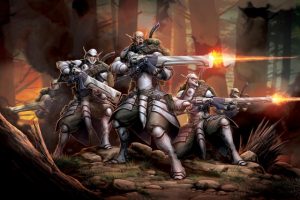 Retribution units are specialists. They are spell casters, snipers, Warjack hunters, melee bricks, whatever you want. As a whole, however, you will want to make these units into more of a tapestry, ensuring to take a variety of units to ensure that the weaknesses of any one unit are covered by a different unit in the force. 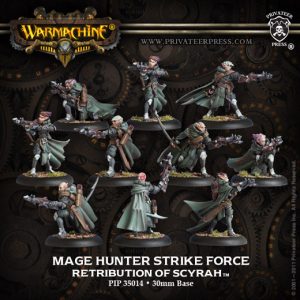 The first unit we’ll talk about the Mage Hunter Strike Force. In Mark 2 that was a curse word! Now they just hurt to play against. By themselves, these guys have stealth, pathfinder, and a blessed crossbow that gains an additional die of damage against ‘Jacks. Fully supported, typically with Eiryss 3 and a soulless escort, these guys become hard to target by spells, gain advanced deployment, and Reposition 3, making them very hard to pin down… oh and they have Eiryss 3 with them, who has the ability ‘Arcane Hemorrhage’  which strips focus and fury, and turns off upkeep spells if she can hit your caster. I believe she is the only model in the game that can strip both Focus and Fury, making her at least a very scary tool box, and at worst the Best toolbox to deal with battle groups in the game. 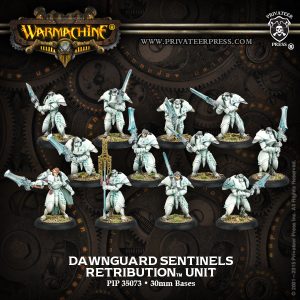 The last unit highlight this week is the Dawnguard Sentinel. One of the best units in the game, these guys are everything the Mage Hunter Strike force is not. They are the brick to the face, where the Strike force is a blade in the dark. Sentinels have high armor, when in defensive formation for an armor buff, and their officer attachment gives them iron zeal once per game, making them immune to knockdown, stationary, and an additional armor boost, cause why not? If killing them wasn’t hard enough, they’re in a faction which buffs troopers in a variety of ways, from speed to armor buffs, either meaning you won’t kill them fast enough, or they’ll get there before you get a good shot off! Pair that with a competitive price point, weapon master combat weapons, and vengeance, which allows them an extra short move and attack if you damage one of them during your turn, and these guys are very… very scary. Kill them good, kill them quick, because there is no tar pitting these guys down. 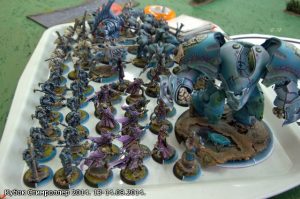 Retribution of Scyrah is a very unique army, and many believe it is one of the top factions in the game right now due to the faction’s ability to create very scary, very complementary pairings. A person who is good at game theory, colloquially known as list chicken, can be very successful with this faction. Not to mention the raw combination of extremely unique rules, and very cool sculpts from their Warcasters, to their Warjacks and units, this faction just looks super cool! So if you want to drag your opponents around the board, or maybe just shoot them to death at range, the crazy mage hunting elf faction is for you!

Well that’s it for this week, tune in next week for Convergence of Cyriss, lets rock some CoC!

Posted on February 9, 2017 by BigVik in Tactics, Warmachine

← The Ninth Realm Episode #30
Signals from the Frontline #505: LVO Recap with Rob and Eddie from Warhammer TV! →

2 Responses to “A Beginner’s Guide to Retribution of Skyrah”