A Beginner’s Guide to Cryx

You are here: Home › Tactics › Warmachine › A Beginner’s Guide to Cryx

Welcome, this week we look at Cryx, lets raise legions of undead, slay our foes, hear the lamentation of the women, and look dang good doing it!

Cryx is the Steampunk undead pirate witch faction. The ‘Casters in this faction are some of the most characterful, and powerful, in the game! Not to mention the hordes of shambling undead, ghost pistoleers, and whip wielding pirate chicks!

From a fluff perspective Cryx comes from an archipelago of islands where the Dragon King Toruk  PLOTS THE DOWNFALL OF MAN! In the mean time he sends pirate fleets far and wide gathering bodies and souls to his cause so he can find and consume his dragon spawn children after they turned on him before man walked upon Immoren! 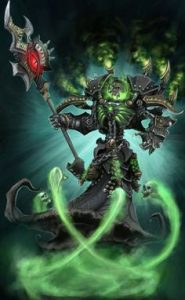 As stated before, Cryx has some of the most bonkers ‘Casters in WarmaHordes. Those who are middling in this faction would be top tier in any other faction, and as of such Cryx is definitely the Caster Faction! Oh yea they have some army there too… 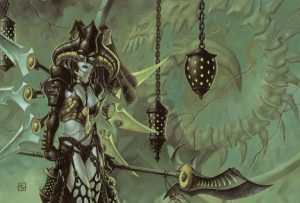 Now lets take a look at Warwitch Deneghra, or Denny 1 in Warmachine vernacular. She is the quintessential turd polisher. She’s fast, hard to hit, has lots of focus, can’t be hit by ranged and magic attacks from further than 5 inches away, has some of the most powerful debuff abilities in this game, and she even gets souls from opponents’ living models she kills!

Let’s look at some of her spell list; Crippling Grasp, Ghost Walk, Parasite, and Scourge. Crippling Grasp does what it sounds like, it makes one model/unit slower, weaker, easier to hit, and easier to wound. Ghost Walk is the delivery boy spell of the century, allowing one model/unit in her army to advance through obstacles (think buildings) without penalty so long as they can move compeletely past it. Parasite is probably one of the best armor debuff spells in the game, not just reducing the target’s armor to near tissue paper, but increasing Deneghra’s. Finally Scourge, the only non-debuff on this list, it throws a blast template out and knocks down everything hit under the template. Oh and her feat applies crippling grasp to every enemy model in her control area (And the assassination assist of the year GOES TO DENNY 1!!!)

Any one of these makes a caster playable (looking at you Malekus!) but she has *ALL* of these! 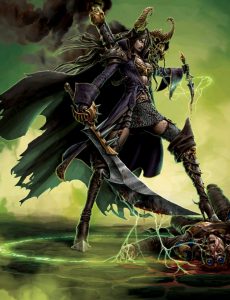 Next the blood mage pirate queen with a Great Rack… no really… its a weapon on her card… STOP LOOKING AT ME LIKE THAT!

Pirate Queen Skarre, she sacrifices her own troopers to deal damage to her foes, she can take damage to increase her own damage, and then drink their fading life force to heal back up.

Now onto her spell list, of note she has Backlash, Dark Guidance, and Ritual Sacrifice. Backlash is nasty, you cast it on a target Warjack, whenever it gets damaged, so does its Warcaster, so you don’t ever need to touch your opponent’s Warcaster to kill them!. Dark Guidance, effectively boosts all friendly attack rolls made from inside her control area almost never miss. Finally there’s Ritual Sacrifice, nice and simple, sacrifice a friendly warrior model for extra focus points, always helpful.

Her feat? she cuts herself to give a MASSIVE strength and armor buff to the same number of friendly models she cut for. Its simple, its effective, it kills things good. 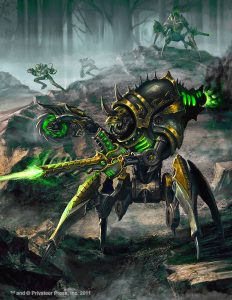 Cryx has some special snowflake ‘Jacks, their heavy ‘Jacks are called Helljacks, and their light ‘Jacks are called chickens, I mean Bonejacks. In general Bonejacks are the fastest cheapest arc nodes in the game, those without arc nodes are generally heavily themed sneaker flank attackers.

The Helljacks are generally smaller, faster, and lighter to their contemporaries. With proper support they can hit pretty hard for a good alpha strike to cripple your opponent early in the game. 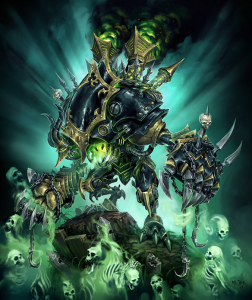 Our ‘Jack of the week for Cryx is of course… DEATHJACK. The Shang Tsun of Warjacks, though he no longer collects souls, he doesn’t have to! This guy comes in at the second most expensive non-Collossal ‘Jack in all of Warmachine, and boy is he worth it! With power up he has a default 3 focus a turn, barring crippled sides, which is as many as a normal Jack can be allocated. He can then be allocated another 2 focus for maximum beat stick! Of course what would all of this extra focus be good for if he couldn’t cast spells too! That’s right, this guy can borrow spells from your Warcaster (primarily offensive spells, but what other kind is there for Cryx) and sling them using that free 3 focus he has!

He hits hard, he’s fast, he casts spells to increase the Focus efficiency of your Warcaster, he’s…DEATHJACK! 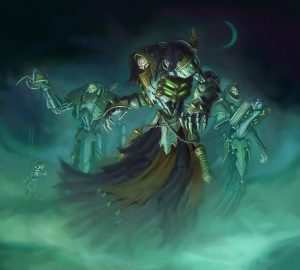 In general, Cryx infantry come in a couple varieties. The shambling hordes of the undead, and the fast scary Satyxis units who have all kinds of crazy abilities!

For the Satyxis side, we look at their quintessential unit, the Satyxis Raiders. They are fast, have high defense, and have 2 weapons, horns and a lacerator, meaning they can kill a fair number of cheap dudes. The magic of these girls is the lacerator. It’s magical, so there are few ways to avoid damage from it, its a chain weapon, so it ignores shield wall from units like Iron Fang Pikemen and ignores shields, it has critical knockdown, and the money… they have feedback. Essentially when they damage a Warjack, the Warcaster takes a damage as well, this means that if your opponent has a ‘Jack wall (and these days who doesn’t?) that you can charge in with these girls and put quite a few boxes of damage on your opponent’s Warcaster without ever touching them! 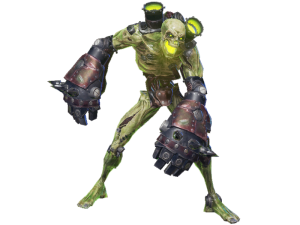 And I would be remiss not to talk about the original steampunk glowing zombie horde unit, Mechanithralls. Tied for the cheapest unit in the game, these guys are… scary. they are undead, so no soul collection, have average speed, low MAT, low defensive stats and 2 steamfists that aren’t much to write home about.  The money with these guys is two fold, the steamfists can be used to “Combo-strike” making their two puny attacks into one respectable attack, and there are a number of ways in the army to bring these guys back on the field, known as recursion, and turn your opponent’s models into more of these bad boys, usually known as Death-toll.

That means they trundle up the field and take casualties to shooting, the necrosurgeon behind them takes a bunch of those corpses and makes more thralls! Not to mention a number of sources of Death-toll to ensure that yet more of these guys are working their way to your opponent’s lines!

Cryx, from a thematic sense is a very scary, and very cool army. They have some of the coolest ‘Casters in the game, not to mention some of the most powerful. They have some scary fast Warjacks, and lots of varieties of infantry to synergize with other portions of the army. If you have fantasies of taking over the world as a powerful steampunk Lich Pirate, then Cryx is the faction for you!

That’s it for this week, next week we look at Retribution of Scyrah, the most angry magic elves this side of Ios!

Posted on February 2, 2017 by BigVik in Tactics, Warmachine