This is Joel Traveller, Bay Area Warcor for Infinity, RattlerNxt on the Forums. Hot off the presses the fine folks over at Corvus Belli, makers of Infinity, have released an update to their Infinity Tournament System Season 8: TAGline. In this update they did a couple of things.

First they updated and added two SECRET MISSIONS: Show of Force and Deadly Dance. We have had these for a few weeks but now we have them finalized. Show of Force is a Direct Operatiosn mission, while Deadly Dance can be used in either Direct Action mission or Joint Ops.

Show of Force is a King of the Hill type of mission where the player with more points touching the Central Objective at the end of the game. You get extra points for that model being a TAG (Theme). There are also two Loot Crates (proper term Panoplies) on the center line that you can loot extra armor or weapons from for your models. This is a really fun addition to the missions as seeing your Close Combat Beatstick like Ajax get a motorcycle and go careening across the field is hilarious.

Deadly Dance, which will be played at the LVO, is a mission about dominating quadrants, except the quadrants are randomized Turn 1. That means you need a highly mobile force in case you get a wonky roll that has you running across the board to score. Each Turn thereafter, whoever both controls one of the consoles and wins a Face to Face roll against their opponents specialists gets to shift the quadrant of the opponent clockwise or counter-clockwise. TAGs get an extra  point when they dominate their owner’s respective zone (Theme).

That leads us to the second and most exciting change: TAG pilots become specialists. TAGs, those Eggs-in-one-Basket Killers Par Excellence, have been very one dimensional. They kill the enemy. The Pilots have been so useless that only Two have even been sculpted and released. After all, why would you get out of your massively armored robot to do anything. Well, now that the pilots can accomplish missions, TAGs play more like Titanfall than as Battletech. You run you butt-kicker up to an objective, mowing down the enemy, then pop out and go claim the objective with your lightly armored little pilot, then your tail back to your armored behemoth. Below you can see an example of the Szalamdra TAG and Pilot profile from Nomads that has everyone abuzz due to her Killer Hacking Device. 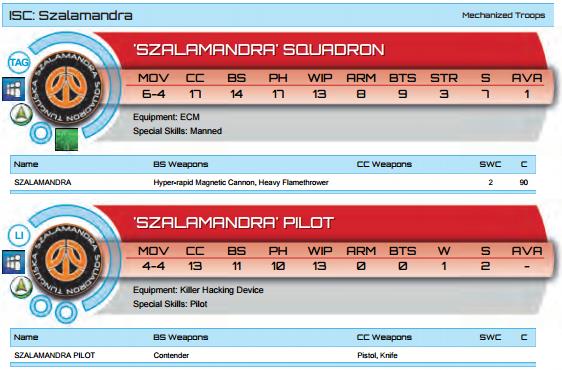 For you PanO, Aleph, and Combined players whose TAGs are Remote Presence, don’t worry, you got…Crabs.  Crabbots actually. Small Ghost Pilots that are silhouette 1 and can perform the same function as the manned TAGS. Except if your Ghost dies, you can still use the TAG with a WIP roll. You pay for that awesome tech after all. Of course, you still get that garbage PanO WIP.

Lastly, but certainly not least, CB gave us the ALIVE Anti-Establishment Group. This is three Mercenaries that will fight for any human army and Tohaa as Irregular Hacking operatives. If you take all three they become Regular though and for 1SWC/50Pts it’s a good deal for all 3. Best part though, the winner of this year’s ITS gets to decide which faction will get these guys permanently. The last two years have been won by Saluthi with his NeoTerra but lots of factions could use these guys (Tohaa..).

Take a look at the profiles for yourself. We have Bit & KISS!, Cypher, and Switch. Cypher is my favorite with dual EMarats and ARM 3 but Switch can really do some fun things with his Holo1 available to all Human armies and Tohaa. Not a lot of factions have access to Holoprojector shenanigans. All of them are kitted out to hunt Heavy Infantry and Tags.

This is a big surprise for mid-ITS Season 8 but I am really looking forward to a lot more TAG utility and so many new models coming (have you seen the amazing Gecko Pilot? He has 2 Assault pistols when he dismounts). Check it all out at http://www.infinitythegame.com/archive.php 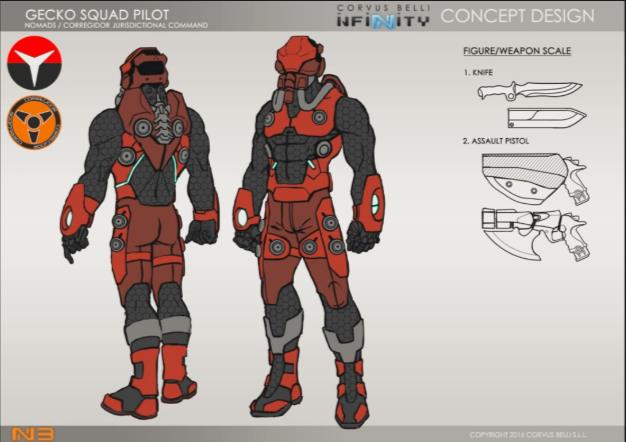 Posted on January 23, 2017 by Reecius in Infinity, News, Tactics

One Response to “New Missions, New Mercs, and New TAG options in ITS Season 8: TAGline”