Hello fans of Frontline Gaming, SaltyJohn, and TFGRadio today I’m bringing you yet another unit that’s benefiting greatly from the Renaissance of Chaos in 40k, Havocs! For more reviews, bat reps, tactics discussions, and analysis check out the Tactics Corner! 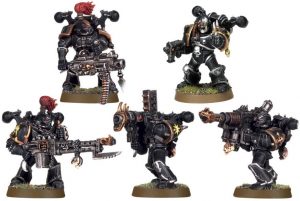 Chaos Space Marines utilize many different units and formations when they go on Crusade to rid the galaxy of the unbelievers and believers in the False Emperor. Some of these units are swollen with grotesque but mighty chaos power. Others are endowed with simpler gifts, they even look similar enough to loyalist Astartes that they could, if it weren’t for all the horns and symbols, be mistaken for them in both organization and armament. Chaos Havocs are one such unit, often compared to loyalist Devastator squads the Havocs have been entrusted by their Chaos Lords with a myriad of weaponry to use in support of the Chaos Warbands from both a distance and up close depending upon the situation. Is this a role the Havocs can fulfill on the table top? 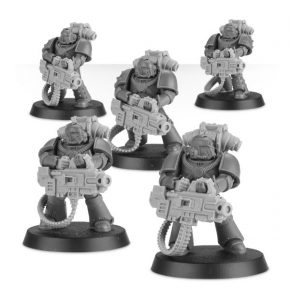 Havocs are a great unit, even if they’re outshined by other Heavy Support choices in a CSM CAD. They have access to a lot of different weaponry and can be kitted out to fulfill numerous battle field roles in games of 40k. From long range heavy weapon support options to close in tank busting with metlaguns the unit can really do it all. 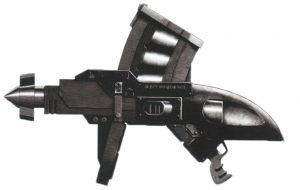 Havocs currently fill an interesting battlefield role for both the traditional CAD and the new Traitor Legion detachments that utilize the Warband formation as their Core choices.  They are a much more flexible unit than many people give them credit for. Unfortunately they do suffer from the same problem much of the CSM Codex suffered from before Traitor Legions, they weren’t efficient choices and it cost too many extra points to make them efficient. With the coming of Veterans of the Long War for free and buffs coming from VotLW and certain marks within specific Legion detachments many CSM units, Havocs included, are going through a renaissance of viability and increased use.

Havocs are unique in the CSM codex as they are a unit that can fill more than one role in a list. Unlike loyalist Devastator squads Chaos Havocs can be fitted with a bevy of Heavy Weapons and a nice array of Special Weapons giving them a flexibility that Devastators lack. They also have access to getting, game long, Relentless via the Death Guard Detachment rules but that’s getting a little ahead of myself.

As far as long range support goes Havocs, again, have access to something their loyalist counter parts lack. The Autocannon. For a mere 10 points a piece, or 40 points total, you can get 8 Strength 7 shots. It’s a steal, it’s better than 4 Missilie Launchers, 4 Las Cannons, or 4 Heavy Bolters. Sure, having access to Grav Cannons would be nice but that just isn’t going to happen, the Autocannon though is a really nice option for the same price as a Heavy Bolter. You could certainly make the case for a squad of Havocs with 4 Las Cannons or Missile Launchers in a Death Guard list where they have Relentless but even then, the Autocannon just seems superior due to amount of shots. Unless your meta is lousy with Armor 12+ and you aren’t packing Meltaguns then I suppose Las Cannons or Missile Launchers. Speaking of Meltaguns!

What. You thought I would put a picture of a meltagun here?

Havocs can take Special Weapons! Up to 4, just like the Heavy Weapons, unlike Devastator squads but like Chosen. They also clock in at 15 points cheaper than Chosen. If you are running a Chaos Warband and are focusing on close range units with lots of Special Weapons than a unit of long range oriented Havocs may be a bit too out of place. In this case you can always throw 4 meltaguns/plasma guns/flamers onto the Havocs and put them in a Rhino. This is often the most overlooked aspect of using Havoc squads, even if you’re forced to take Havocs in a Chaos Warband you can still build the unit to fill whatever role you need them to fill. Even in a CSM CAD you can still get a great unit to carry a heap of Special Weapons into the enemy and save 15 points over the Chosen. In the CAD build though, you’re competing with other Heavy Support choices which is why I think Havocs are still best suited to a Warband.

Which warband(s) suit Havocs the best? Well they’re good in any Chaos Warband build as they have access to cheap long ranged shooting, like I pointed out, and in a Warband they’re Objective Secured so you have a great back field camping unit to hold those home objectives while still contributing to the fight. The most obvious Traitor Legion to use them with is Death Guard. When taken as part of the Death Guard detachment the Havocs have the Relentless special rule and so can march up the field, or wherever you need to get some work done. Moving these units in a non-DG army sucks for a turn because they’re forced to Snap Shot the turn they move. Effectively cutting their usefulness in that battle by 1/5 (assuming 5 turns), where as in a Death Guard list you can re-position for optimal targets every turn with no drop in effectiveness for the unit. Even in a Traitor Legion Warband like World Eaters I don’t see them as a high tax to pay. World Eaters benefit from a massive amount of extra movement potential and they would benefit from a unit or two that can crack open a few Battle Company Rhinos for them. The best way to do that is up close with meltaguns and your Havocs can take 4 of them and move at a speed that keeps them close to the World Eaters that are going to try and chew through the enemy quickly in close combat. The one Legion I think this unit meshes with the worst is Alpha Legion as they want their army to have as much outflank and infiltrating potential as possible. Even here though this unit can shine. If you’re playing Alpha Legion you’ll want to give yourself some sort of bonus to the Reserve roll, make sure you get your units when you need them. What better to hold down a Bunker, Bastion, or Aegis Defense Line with a Comms Relay than a squad of Havocs with Autocannons? 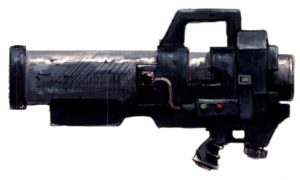 Leave a Reply to Eaton Zhou