Hello everyone, Danny here from TFG Radio to continue my trek through the HQ choices of the Tyranids, and today we land on the probably the least seen, least loved, and least used, The Tyranid Prime! Of course, if you want to really get why this bug has a bad rap, check out Frontline’s Tactics Corner. 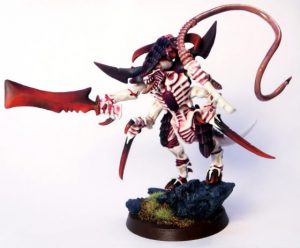 The Tyranid Prime is like the Captain level of the Tyranid command-chain.  It brings some fight and punch while also having the standard support abilities that you’d expect from a Tyranid HQ choice.  It is unique amongst the Tyranid HQ choices for one big reason that we’ll get into that other codexes often take for granted.

Ok, wow. The one thing that Tyranid Prime has going for it is versatility and upgrade options. You can build this little bug in a variety of ways, either as a respectable melee fighter or as a cheaper, shooty synapse beacon to hang in the back. In terms of pure kill, a Tyranid Prime in melee mode is probably the most killy of the version, but it is also not cheap. The big problem here is cost: A Prime is already pricey, and throwing in tons of upgrades only makes it pricier. The one upgrade that is actually wonderful is Fleshhooks. The bugs lack assault grenades, so at least this bug has a chance to swing at initiative when charging through terrain.

Special Rules:
Alpha Warrior: All Tyranid Warriors or Shrikes in the same unit as a Prime use its WS or BS unless theirs is higher for some reason.
Independent Character: The only one in the entire codex. This bug can join units!
Shadow in the Warp: -3 Leadership to enemy pyskers within 12 inches.
Synapse Creature: 12 inch bubble of Fearless and ignore Instinctive Behavior Tests.
Very Bulky: Counts as 3 models for transport purposes.

So, the Tyranid Prime has a huge IC tax. This makes some sense as it is unique to the codex, and a Tyranid Prime in a unit of 30 Hormagants could be hard to shift. That said, the Tyranid Prime is expensive as all get out, so perhaps GW levied too high a tariff here. Shadow in the Warp and Synapse are all handy things to have, and it is what you expect from an HQ choice. Alpha Warrior definitely tries to shoe horn the Prime into a specific build, namely as the leader of a group of Warriors or Shrikes, which isn’t a terrible unit, but it is also isn’t an amazing unit either. You never really see Primes much, and you have to ask why? With a pretty amazing statline of WS6/BS4/S5/T5/I5/W3 and 4 attacks base, what’s wrong here? Well, cost is the big issue. For 20 more points, Space Wolves players get a WS5, BS5, S5, T5, W3, A4 character with a 3++ and a Thunder Hammer that is Cavalry. Primes do not get any invulnerable save at all, and they have no means to increase their speed.

With that in mind, what to do with this often maligned and often unseen HQ choice? The first option is as the cheapest mandatory HQ choice in the Tyranid Codex, and as a backline synapse character, it can hide a lot easier than say a Tervigon or even a Hive Tyrant. One of my favorite oddball uses is to actually put a Prime in a fortification with a weapon to fire to make use of that rare BS4. A Plasma Obliterator with a Prime isn’t too bad at all or even a Firestorm Redoubt with a Punisher Cannon. This is definitely a strange use, but it can catch some builds off-guard. Of course, a lone Zoanthrope does the same thing for almost a third of the cost, plus with some additional psychic dice. So yah, poor Prime.

You can also do what GW wants you to do which is put the Prime in with a unit of Warriors. The Warriors suddenly get to use WS6, which isn’t too shabby at all, and a Prime with a Bonesword and Lashwhip will kill Marine statlines pretty efficiently. You could also put a Prime with a unit of shooting Warriors to get them to BS4 on their deathspitters and one heavier weapon, and this isn’t necessarily a bad build, especially with a Tyrannocyte. The problem here is of course cost as a unit of 5 warriors plus special weapons with a Prime and Tyrannocyte thrown into the mix is not cheap. All told, you are looking at spending about 400 points being conservative. That’s a lot of investment in a unit that may not do a whole lot of damage depending on the target and is highly vulnerable to S8 attacks.  You could go with the Synaptic Swarm formation for 18 inch synapse, but then you also need to bring along 3 units of Warriors, and perhaps in an Apocalypse game that could work out, but in a standard competitive list, that’s too many  points in sub-optimal units (a sad theme for Tyranids).

You could also go for a melee build of the above, but that is even more expensive for a unit that cannot charge out of deepstrike and only walks 6 inches. Of course, you can go with the Shrike build for jump infantry, but well, the Prime doesn’t have the option to take Wings, so it can never get the 12 inch move, so you have to daisy chain and overall, it is the typical Skornegy inherent to the Tyranid codex. The Prime is not a bad character that could do a lot of work, but there isn’t a good delivery system. If you build a Prime for melee, it can kill a lot of targets, but of course, you run into the problem that it cannot get to combat easily and it costs far more points than it should.

You can also pair a Prime with any of the infantry gribblies like Hormagants or Termagants, and if you really want a melee Prime, that is probably the ideal delivery system as you get a lot of cheap bodies to soak wounds, and with Bone Sword and Lash Whip plush Fleshhooks, you get a pretty mean fighter that strikes at I8 with 5 (6 if charging) attacks at S5 (maybe 6 if you take Adrenal Glands), and AP3. That’s not too bad when backed by a large mass of Hormies. It gives you some higher quality attacks to go with the high quantity ones. Again, cost is an issue as this is another 400 points or so, depending on upgrades, and that is a lot for a decent tarpit unit, but one that has no real defense other than 30 bodies.  The insane level of melee and shooting output that newer codexes put out mean that 400 points of bugs is likely not going to last that long, and really, if you want a tarpit, ignore the Prime for another 30 Hormagants or Termagants.

So all in all, is a a Prime worth it? Not really, sad to say. In a competitive list, again unless going for something really-really screwy, you should just move on to another choice. In a fun, fluffy list, there could be some room for one, but in any game where you really want to try to win, it is best to leave this bug on the shelf.

So there you go, the poor Prime. Perhaps one day it’ll get a big points decrease, but until then, sorry buddy. As always, check out TFG Radio.