A Beginner’s Guide to Protectorate of Menoth

You are here: Home › Tactics › Warmachine › A Beginner’s Guide to Protectorate of Menoth

Hey Guys, BigVik here with a faction overview of the Protectorate of Menoth! Check the Tactics Corner for more great articles!

Today we continue our faction overviews for those who know they like Warmachine, but don’t know what faction they want to start with yet. Today we talk about the followers of the True Faith, let the heretics burn!! 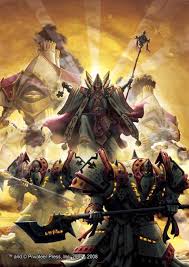 Fast forward a few years, a couple grand crusades, and lots of burned heretics later. The Protectorate of Menoth is now one of the major factions from a political point of view, and is on the verge of a golden age of expansion. 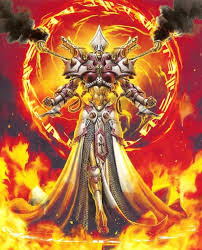 With regards to gameplay, Protectorate has major themes of fire, paladins and knights, soul collecting, army buffing while denying your opponent their buffs, and BURNING THE UNFAITHFUL (cough)… sorry, don’t know what got into me there. 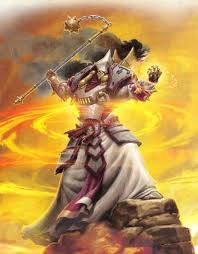 Menoth Warcasters tend toward being somewhat easy to kill, powerful divine spell casters who, though they don’t tend to do a lot of work themselves, will generally have a toolbox of abilities to crank their army up to 11, while frustrating your opponent by denying some of their abilities.

Queue in High Exemplar Kreoss, the quintessential Menoth caster. He is the progenitor of the term “Drop and Pop” armies from the old days. He has one of the best defensive buffs in the game, Defender’s Ward, along with the ability to wash away all enemy buff spells. The topper to his cake is his feat, nice and simple, Enemy models in Kreoss’ control area are knocked over. This is a very scary feat, as it allows you to gun your opponent’s caster down trivially in many scenarios. 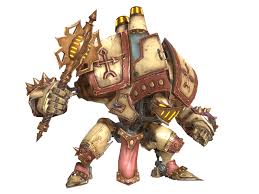 Menoth warjacks are very utilitarian. They don’t often have few esoteric abilities, and are of somewhat lower cost to contemporaries of other factions. The best showing of this is the Crusader. It has a simple card, with no special abilities, it’s slow, it’s cheap, and it hits like a ton of bricks to the face. It works, I like it! 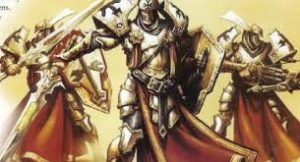 Menoth warriors have a variety of themes, including exemplar knights, partisan fire bomb throwers called Holy Zealots, the immovable objects that are the vengeful Paladins of the Order of the Wall.

One of the most iconic units in Menoth is the Holy Zealot. A jihad themed partisan chucking firebombs around the battle field, with the leader of the unit being a priest who chants prayers to imbue holy blessings on the unit.

Using these prayers, the zealots can become immune to fire damage, and jam themselves up on your opponent’s forces. This can then be followed up by all of your fire belchers, and flamethrowers laying waste to your opponent’s front line, with the zealots being un touched.

My favorite feature to this unit is their command attachment, called the Monolith Bearer. He has a once per game ability which allows him to bring all of the zealots who died the turn before, back into play. So you get multiple turns of jamming your opponent’s front line and calling in holy fire!

Perhaps considered to be the more prolific warrior unit in Menoth right now is the Idrian Skirmishers. These guys considered to be some of the best skirmishers in the game. They have military rifles to gun down enemies at range, with the ability to combine their range attacks by concentrating on a small number of targets to increase the power of their attacks. 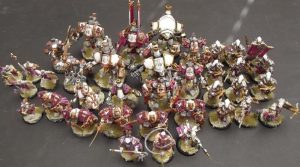 These guys really shine with their command attachment, the Idrian Warchief and Guide. The Warchief allows the skirmisher unit to reposition back three inches at the end of their turn, allowing them to be 14” away from the target they just shot to pieces by the end of the turn. Not to leave the Guide out, he gives the unit the ability called Prey, this means they designate a bullet sponge, and get hearty bonuses to hit and damage against that target. Once the prey’s dead, the skirmishers designate a new target.

In spite of all of this weaponized awesome, the Idrians do have a weakness, they have T-shirts for armor, meaning that if your opponent can hit them with a large number of low power hits, the skirmishers will go down quite easily, but nothing’s perfect.

When looking at Menoth as a whole, the casters provide solid support for the army, the jacks are relatively cheap bricks you can throw in your opponent’s face, and the infantry range from highly specialized, to cheap and spammable. Armies have wide variation, and Menoth does not seem to have many whole faction weaknesses, making it a solid pick as a primary faction.

Well that’s it for this week, tune in next week for my overview of the red defenders of the Motherland, Khador!

Posted on January 19, 2017 by BigVik in Tactics, Warmachine

← Wrath of Magnus Review: Formation: War Coven
The Ninth Realm #28 Tzeentch, Change We Can Believe In →

3 Responses to “A Beginner’s Guide to Protectorate of Menoth”