The Mysterious Man in Red is, well…. GW already told us who it is

You are here: Home › 40K › Editorial › Rumors › Uncategorized › The Mysterious Man in Red is, well…. GW already told us who it is 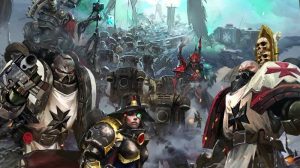 Zyekian here to tell you that the raging interweb debate on the identity of the mysterious crimson figure is over.  And it was actually over from the start as GW left a trail of space bread crumbs right in front of us, straight to the boots of this critical character.  Read on as the space bread is illuminated for all to see!

So let’s look at the suspects.  And to be clear full disclaimer: this is educated speculation.  Zyekian has the power to foresee many fates upon the skein but cannot see all paths clearly.  That said, he will sell his first born child to the Haemonculis pits if he’s wrong.

Let’s look at who the Man in Red is probably not first. 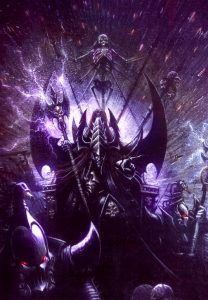 Vect doesn’t make appearances even to other Dark Eldar.  And if he does he uses simulacrums, clones of himself that he shares a psychic bond with.  Yes, psychic.  When you’re the boss you get to cheat.  Could this be a virtual Vect?  Doubtful.  His story arc got a good amount of closure in Andy Chambers’ Path of the Archon novel.  And if this is Vect everyone is really screwed. 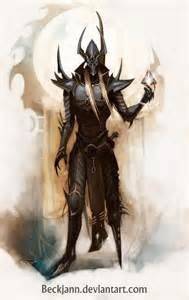 Sythrac, the Blade of Vect.  When Vect sends this guy in, it’s over.  We’ve actually heard rumors of a Sythrac release for a while now, and from a source that called the Magnus release and other rumors accurately.  The Man in Red will be Sythrac before it’s Vect, and if we do get a model for him in 2017 I will be unsurprised.

It’s not Sythrac though because the armor isn’t right and I can’t quite get to Vect being this cooperative unless he’s going to end up with Saint Celestine’s head in jar (still kept alive of course). 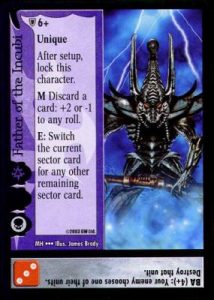 It’s not Arhra, Drazhar, or a generic Incubus

Arhra is the original Phoenix Lord of the Striking Scorpions.  His pupil Karandras saw him teachings as incomplete and (maybe?) tipping toward Chaos, culminating with his leading a bunch of demons to destroy the Shrine of Asur.  Karandras beat him up and then vanished, leading Arhra to ragefully slaughter all his Striking Scorpion followers and then vanish himself.  He might be the founder of the Incubi and could be Drazhar.

Folks have been saying that the silhouette of the Man in Red looks like Arhra.  I don’t see it.  Arhra has a scorpion hat and is generally just a diabolic murder machine.  Also his role is “executioner and killer, nothing more, nothing less”.  It’s too hard to see him shifting gears to diplomat. 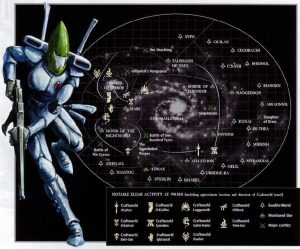 It’s not an Exodite

For our round-eared readers, what is an Exodite?  Prior to The Fall and even prior to the construction of the craftworlds, a large group of eldar fled the growing depravity of the Eldar Empire.  These people left for the far fringes of the galaxy where they settled on remote, lush planets to live like their ancient ancestors did – with the land and not among the stars.  While they do retain some technology of their old empire they have no need for an infinity circuit or spirit stones.  When an Exodite dies their soul does not go to Slaanesh but to their World Spirit, an entity that they can all commune with during their lives by merely curling their toes in the grass.  They were untouched by The Fall, kept safe from Slaanesh by their planets’ spirit and vast distances.  Younger generations of Eldar are increasingly looking at these Exodite worlds as the basis of a new empire.

Exodite worlds actually ring the entire galaxy apart from the region near the Eye of Terror.  Click the image above and have a look.  They’re a bigger deal than you thought.

Okay so the Man in Red could be an Exodite.  We know so little about them that they’re a wild card.  Rumors are thick of an Exodite character and this could be him.  There’s also an Dark Eldar Incubus that we learn was born an Exodite in the Andy Chambers’ novels, but he gets eaten up (on purpose) by an Exodite planet’s dying World Spirit.  He’s not a huge character but he’s substantial and travels with the Harlequin known as Motley.  The armor has a fur pelt so maybe that’s “primitive”?

Exodite worlds are on the opposite end of the galaxy from Cadia though.  Yeah the webway and all, but a Cadia-Exodite connection will require substantial new territory for GW.  Maybe the refugees are going to take a webway hop to an Exodite planet?  Eh…  And going back to the armor, it doesn’t look primitive enough to me.

The Exodite theory remains more realistic than anything above though.  The Aeldari “Triumvirate” may include Exodites as the third group of Aeldar so I think something is going to materialize.  We may see an Exodite 40k army in the future and well, wallet armed and ready for that.  But the the Man in Red is almost certainly… 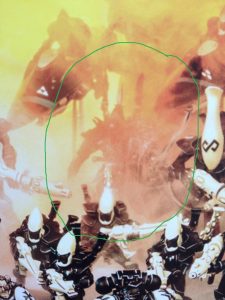 The Mysterious Man in Red is none other than Prince Yriel

And that is the Spear of Twilight in his left hand.  It features the weapon’s long glaive-like blade and substantial (but blurry) hilt like what we can clearly see on the cover of the recent Guy Haley novel, Valedor.  And by recent, I mean it’s a fluff advancement story.  This book was a very good read, highly-recommended and definitely the best Eldar novel to date.  Go pick it up. 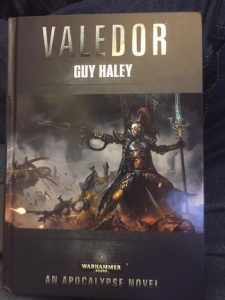 Still skeptical?  Let’s dig into some of what happens in this great book how it tells us that the Man in Red is Yriel

Exhibit A: Prince Yriel is guided by the Harlequin Shadowseer Sylandri Veilwalker from the very first chapter.   It looks like we may get a Sylandri model in this release and given that her only apparent function in the fluff is Yriel’s guru, it seems like we’ll probably be getting him.

Exhibit B: We find out in a Craftworld-Dark Eldar war council that Yriel has half Dark Eldar blood.  His mother was an Iyanden Princess while his father was a mysterious Dark Eldar vagabond that swept her off her feet with some kind of tawdry secret affair. That’s right, the Prince is a royal bastard.

Yriel gets angry at his dark kin and calls them all liars, yet cannot (or perhaps will not) name his actual father.  The Archons at the war council have a good time rubbing it in the faces of the stuffy Iyanden aristocracy of course, it’s a fun scene.  They ask Yriel to stop and think why he’s never fit into the rigid paths of the craftworlds and why he felt the yearning to break out freely on his own, indulging his impulses as a corsair.  The reason is clear.

Exhibit C: Yriel is the only leader that both groups of Eldar are willing to follow.  Not only do craftworlders like Yriel, the Dark Eldar claim him just as much, offering him an elite Archon station in Commoragh any time he likes.

Exhibit D: Light and dark coming together make what?  Yriel’s weapon is named the Spear of Twilight, a perfect fit for a hero who is unifying both light and dark for a singular purpose.  The symbolism has been hiding in plain sight this whole time.

Exhibit F: The goal of the Harlequins throughout the Dark Eldar Path trilogy as well as other sources is to unify the Eldar race against Chaos not by favoring the aspects of one group over the other but by encouraging all Eldar to embrace everything that they are.  Discipline and impulse.  Technology as well as ancient ways.  Yriel fits the bill here like no other.

Exhibit G: In the final chapter of the Valedor novel Yriel, heroic but sapped of all life by his cursed spear wanders into Iyanden’s shrine to return the spear and just die.  Sylandri is there once again.  She picks him up and shows him visions of demons bursting forth from the Eye of Terror… then shows him images of his people surging in glory with the Eldar gods returning to strike back vengefully at the Chaos gods.  In this vision Slaanesh did not destroy the Eldar gods or the souls of the dead but is merely holding them captive.  The story ends as Yriel surges with energy and purpose, seizes the Spear of Twilight once again, and follows the shadowseer into the webway.  Sylandri has him at the center of the unfolding story.

Exhibit H: Just look at all those exhibits! 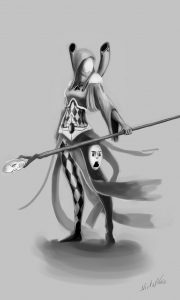 And for Bonus Points…

The exact identity of Prince Yriel’s Dark Eldar father isn’t stated in any book.  What I’ll point out though is that in the Valedor novel the Dark Eldar Archons really like Yriel and respect him completely.  I mean tremendously.  He appears to be a celebrity among the Archons despite never having set foot in the Dark City.

And someone in Commoragh sent a lot of Dark Eldar aid Yriel in the battle of Duriel, including the likes of Lilith Hesperax.

And one very high ruler of Commoragh is known for taking powerful Eldar women as companions. 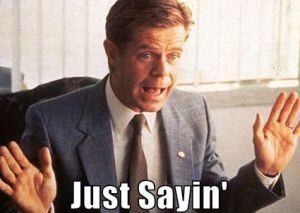 Posted on January 18, 2017 by zyekian in 40K, Editorial, Rumors, Uncategorized

19 Responses to “The Mysterious Man in Red is, well…. GW already told us who it is”