The attack craft variant of the TX-4 Piranha (as anyone familiar with the Tau naming lexicon should know), Forge World’s slightly-more-differenter TX-42. Click to read on, or check out the Tactics Corner for more reviews and strategies. 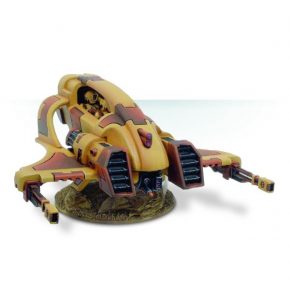 I really like Piranhas. Really, really, really like them- if it weren’t for the fact that the ITC vote had essentially destroyed the usability of their formation I’d probably be running thirteen or more of them right now as my main army. (I pray for the upcoming implementation of the Tau draft FAQ.) I’ve touched on them a number of times in the past in other articles and I think they’re a fantastic unit on the tabletop; not as powerful as some of the obviously-broken stuff in the game, but much better than most people give them credit for and they have a wide variety of uses in the game.

So in my mind at least, the TX-42 has a pretty big set of shoes to fill if it wants to come off getting the Good Unit label.  And, on its surface at least, it has a reasonable shot at things: the TX-42 is the dedicated attack version of the Piranha chassis, designed to target and destroy armor and other hard targets. Its basic statline is pretty similar to the standard Piranha’s: it’s still a Fast, Open-Topped Skimmer with BS3 and two HP. It receives a small bump to its armor values, being 11/11/10 compared to the standard version’s AV10 on the sides. The TX-42 is also available in squads of up to five like its cousin, but the basic chassis comes at a much higher price: 70pts per model, nearly double what a standard Piranha runs. 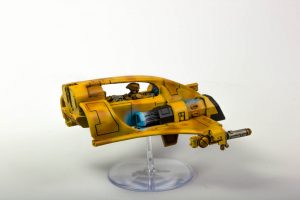 For that major price increase, the TX-42 is actually rather more of a sidegrade than an upgrade over the basic one. Where the basic Piranha mounts a single weapon in its chin turret and has a pair of Gun Drones in the wings, the TX-42 gives up its drones entirely and moves its main weaponry to the wing mountings and upgrades them to a twin-linked Fusion Blaster. This is not a terribly exciting start to things, because you’re paying 20pts over the cost of a non-TL Fusion Blaster and losing one of the biggest benefits of the chassis, the disposable bonus unit (itself worth a nominal 24pts.)

The main gun can also be switched out for several other options, of varying palatability. A twin-linked Missile Pod is free swap- not a bad deal, comparatively at least. Although it gives up the ability to crack heavy armor, a good rate of fire with good accuracy can let the TX-42 hang back at long range (where it is much safer) and harass enemy armor using its speed and mobility. A twin-linked Plasma Rifle is also available for 10pts over the usual cost; considering that you can get almost two Crisis suits with twinned sets of Plasma Rifles each for this cost (giving you 4x the firepower)- the Piranha is tougher, but not that much tougher. Finally, for a whopping 20pts extra you can get a Rail Rifle, which is… just baffling considering how ineffective the gun is. It’s a Plasma Rifle with one extra pip of AP1 and a marginally longer range.

TX-42s also have the same add-on options normal Piranhas do- they can take a pair of Seeker Missiles at 8pts a pop or select anything from the vehicle wargear chart, of which Sensor Spines are the most likely to actually get used. 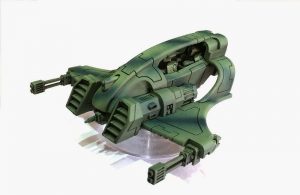 Not a lot, to be honest. With the significant cost increase over a standard Piranha and the major loss of utility due to the absence of attached Gun Drones, there isn’t a lot to recommend the TX-42 at the end of the day and certainly not in its primary configuration. Taking multiple Fusion-armed Piranhas will almost always be a superior option, and it’s only the minor add-on benefit of AV11 on the sides that makes it even slightly, marginally arguable.

If you’re dead-set on using it, though, I think that the Missile Pod version is the most functional. Able to hang back and cause problems from a distance, a small squad of them ends up being a bit more expensive than similarly-armed Crisis but also better able to get into side/rear armor of the enemy early on and significantly harder to deal with. S7 weapons are one of the places Tau do the best, and the TX-42 is no exception in this regard.

The real issue for the chassis is that it gives up a lot and doesn’t gain much in return. We’ve harped on the issue several times, but giving up that pair of Gun Drones is absolutely critical for the unit- a large part of what makes the standard Piranha valuable its its multirole capacity to add extra firepower, block movement, assault weakened units, etc, through the use of its Gun Drones, and losing that is a major hit to the unit. If the TX-42 gained more elsewhere or didn’t also get a price increase tacked on in addition to its loss it could be workable, but as it stands it’s just not a very good unit.

There are some codices where you could make an argument for the TX-42 as a usable, if not exciting, unit. But with the Tau codex having so many good options, and especially so many good options that can get basically identical weapon loadouts, the TX-42 just isn’t a very attractive option at all- which seems to be something of a pattern for many of Forge World’s Tau units. A mediocre base chassis with absurd upgrade costs and a role that is better-filled by units already printed in the core codex is a pattern you can see spread across a wide variety of FW options, but it is especially prevalent with Tau.

If you’re looking to expand an existing army or start a new one, Frontline Gaming offers up to 25% off on Games Workshop products every day. (Buy Piranhas.)