Not quite the smallest flyer in the game, but coming close: the Remora Stealth Fighter. Click to read on, or check out the Tactics Corner for more reviews and strategies.

The Remora Drone Stealth Fighter is a unit added to the Tau armory by Imperial Armor 3. Formally the DX-6 Drone Fighter, it is a light flyer with a mix of armaments that allow it to do a number of jobs with semi-reasonable proficiency. However, its main claim to fame is its combination of durability and cheapness as well as being one of the few non-Imperial flyers that has Hover mode.

The Remora’s statline is not terribly impressive on its own; with AV10 on all sides it can be killed by almost any weapon on the battlefield and two HP means it doesn’t take many bad rolls to send it crashing down. On the other hand, BS3 is pretty standard for a Tau unit, though it is a pip behind the Hammerhead and its ilk. As a flyer with Hover, the Remora has pretty good movement options when getting around the battlefield, especially since it clocks in at a very skinny 90pts per model (with up to five models in a squad.) 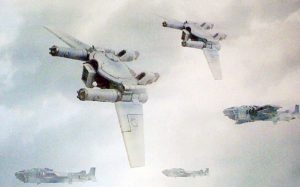 Like many Tau units, this is where the Remora really starts to show its uses. It comes with a Long-Barreled Burst Cannon as its main armament, which gets six shots (two more than the normal variety) as well as a 36″ range (doubling that of its smaller cousin.) While this isn’t an exceptionally exciting weapon, it throws down a fair number of dice and has a statline that is useful against most all targets to some degree, so we can hardly complain. It’s backed up by two Seeker Missiles that give us a handy tank- or MC-busting option, if one that isn’t gonna last the game. It also mounts a Networked Markerlight- something that is always appreciated on a platform that has Skyfire, and since it’s Networked the Remora has a good chance of boosting itself to BS4 (or higher) if no other units need to take the counter. A Blacksun Filter rounds out its armament, though it is almost entirely useless due to the Remora being unable to start on the board.

The Remora also comes with a couple of handy special rules; like most of the Forge World flyers it has the ability to Deep Strike. Unlike most of them, however, its small size  means that doing so in a confined space isn’t simply a complicated means of suicide, so it has the potential to arrive at unusual vectors or locations to get best use out of its weaponry before the enemy can respond. It also comes with one of the best rules a unit can have: Shrouded. This means that it will always have at least a 5+ cover save, even in a worst case scenario, and when Jinking or obscured by terrain it will become shockingly hard to kill, even when in Hover mode.

If using the Death From the Skies supplement rules, a Remora has Agility 4 and Pursuit 3; however, as a Strike-Fighter it cannot attempt to make break turns, though it is allowed to use Skyfire mode if it wants to and suffers no penalty to Ballistic Skill against ground targets. It otherwise counts as a Fighter for rules purposes, so it will gain most of its benefits against other aircraft- somewhat unfortunate, but not awful, as the Remora makes a passable air combatant.

So what’s so good about the Remora? Well, it’s not a tournament-breaker, but it can be surprisingly frustrating for your opponent to deal with because of a number of reasons. One of the big ones is its small profile- mounted on a normal flying stand like those used for skimmer vehicles, the Remora can not only get cover saves from terrain (provided you aren’t using DftS, of course) but it is actually relatively simple to obscure it entirely behind many terrain pieces, something that is beyond the pale for most flyers. This extremely small profile combined with extremely fast movement can be very frustrating for opponents to get rid of if you are willing to keep it in places where it’s hard to get to.

Now add in the effects of the Shrouded rule and you have a consistent 3+ or even 2+ cover save against almost anything that shoots it. And even when you don’t have terrain or models to do the job for you, the option to Jink lets you get your cover save the hard way. While there are certainly plenty of weapons that can cut through its save (Smart Missiles, Hunter’s Eye, etc) even these typically struggle with the Remora because of the innate protection afforded by being a flyer.

Hover mode only enhances this usefulness by allowing for superior maneuverability as well as the ability to score objectives at game end. AV10 isn’t impossibly tough, but combined with that 2+ save it can be more than enough to ward off whatever remaining firepower the enemy possesses by turn 5 or 6 and score a distant objective relatively easily. This is a common feature for many Imperial vehicles like the Stormtalon, but much rarer for xenos ones- and one well worth its price, I think.

The Remora’s firepower isn’t terribly exciting my most standards, but it does make a good harassment unit to pick off survivors from squads and it can do a reasonable alpha strike by launching its Seeker Missiles at a target the turn it enters the board. Vehicles are an especially tempting choice here, as two S8 and six S5 shots (probably at BS4) will do quite a number on most light-to-medium tanks. This tactic can be greatly aided by Deep Striking in somewhere in the vehicle’s rear arc, usually not all that difficult of a feat given the Remora’s small size.

Although Remoras aren’t available in any formations, sadly, there is one interesting interaction they have- the Drone Network gives a +1BS bonus to all drones on the field (even those not in the formation)- and as the Remora is more properly the Drone Fighter, it is a pretty small leap to assume that it benefits from this boost as well. This isn’t a huge effect, but BS4 base on a unit is pretty nice for the Tau.

As a relatively cheap and flexible unit, the Remora does a good job of being a dependable and survivable unit that can do a number of jobs as needed. Don’t expect to see Remoras cluttering up the top tables of a tournament anytime soon, but played in local tournaments or pickup games at the store you can have a lot of fun with them.

Remember, whether you’re looking to start a new army or expand an existing one, Frontline Gaming offers up to 25% off on GW products everyday.

The remora sounds nice, but outside of being a self-contained seeker missile platform thanks to the networked markerlight, it seems like piranhas can do the same jobs and will be competing for the same fast attack slots.

The Piranha can do a very similar job, it’s true- the difference is that the Remora is more expensive, but also more survivable. You give up the inbuilt gun drones, but gain the Markerlight.

You also need to remember that the burst cannon is twin linked! 6 bs3, TL, str5 shots are nothing to sneeze at and cause most things not in power armour to soil their pants lol orks and guard are like wheat before the scythe

That many shots can actually scare marines pretty well just due to weight of fire.

Unfortunately, the Remora is not a drone, so it does not benefit from the Drone Net bonus.

Not being a drone is actually really good. If it had the drone unit type, it would be non-scoring.

Those apply to a faction. This applies to a unit type, unless I missed a release and drones are their own faction now.

Nothing in the rules makes a remora a drone. In the fluff yes, but not the rules.

Actually, the ones that apply to Chaos Space Marines have been ruled to work on the CSM parts of Khorne Demonkin as well. So it’s not actually a faction.

There are no “rules” for units being drones. Drone is not a unit type, jump infantry is a unit type- drone is just a word in the name of some units.

In my copy of the Codex, everywhere I can see one, they’re listed as Jet Pack Infantry (Drone), like how Characters are marked out.

As a Tau player who routinely uses Remoras there are a couple of other points worth mentioning:

As a flyer, the Remora can’t be assaulted unless it hovers, so it is one of the precious few Tau units you can throw around the board without having to worry about where your opponents units are. I can’t emphasize enough the peace of mind that brings, especially in an assault heavy meta.

Once I’ve told the opponent that the Remora is a flyer with a 2+ cover save on demand, 9 times out of 10 they ignore it for the rest of the game even if they have dedicated anti-air. This means you can use the Remora with relative impunity, grabbing objectives or harassing weak units.

For 90pts, the Remoras weapons are relatively light, and I often find that unless I get lucky with some seeker missiles, or unless my opponent has lots of light infantry, the Remoras won’t make their points back. This is especially true if I roll badly for reserves and they come in late. The real value in the Remoras is in their durability and speed. They can reliably survive the whole game and seize or contest far-away objectives with just one round of movement. That’s won me more than a few close games.