Today we take a look at the workhorse of the Tau armored cadres, the Devilfish fighting transport. Click to read on, or check out the Tactics Corner for more strategies.

The Devilfish is the standard troop transport of the Tau Empire; in the game, it is a very mid-range vehicle, with armor values, firepower, troop capacity, and most other features coming in around the center of the pack compared to various other transports that exist. Unfortunately, a comparatively (though not absurdly) high price tag as well as a general lack of necessity for its functions mean that Devilfish rarely make appearances in most Tau lists. However, the vehicle is not without its strengths and can make a good complement in a highly-mechanized Tau force.

Devilfish come with AV12/11/10 and 3HP, which is a tad higher than most vehicles but not impressively so; the Eldar transport skimmers have them beat with AV12 on the sides, whereas Imperial transports tend to come in much, much cheaper than the Devilfish’s 80pt base. However, with three crew hatches the Devilfish allows for pretty flexible deployment of its passengers and a capacity of twelve models means that it can hold about as many Fire Warriors as you could possibly want in one place. BS3 on the vehicle means that its Burst Cannon is not generally doing a ton of work, though it can support the embarked squad with both that and the pair of Gun Drones that come for free as part of its loadout. Finally, as both a Skimmer and a Tank the Devilfish can be reasonably mobile when needed, even Ramming or Tank Shocking enemy vehicles in an emergency- however, do note that it is not a Fast vehicle and thus will be limited to moving 6″ if it wants to make any real use of its weapons. 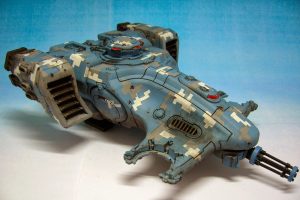 As Skimmers, all Devilfish have the ability to Jink for a 4+ save; this is perhaps one of the high points of its use, since it can give you a strong defense against most types of guns (especially when upgraded.) While the forced snapfire makes its own firepower seem even more pathetic, the passengers (and Drones!) are not bound by this limitation and thus the Devilfish’s main role is well preserved.

A Devilfish can upgrade its Gun Drones into a Smart Missile System (twin linked, natch) for 10pts; while this is actually a very reasonable price, lacking the Fast trait means that the Devilfish will generally only get to fire one of its two guns (SMS, Burst) at full Ballistic Skill and thus forces you to make some awkward choices. With the chassis already being fairly expensive and prone to Jinking a lot, I don’t find myself taking this option much- however, the SMS is a great gun and you could do a lot worse than upgrading yourself to a so-called “Warfish.”

Devilfish can also buy up to two Seeker Missiles at 8pts each, but I typically find that these simply aren’t accurate enough or mobile enough to justify their use compared to platforms like Piranhas, Remoras, etc. The option to make for a really brutal alpha strike exists, though.

Apart from that, the Devilfish has the full suite of Tau vehicle upgrades available to it. The big winner here is the Disruption Pod, which grants you +1 to all cover saves- this means a 6+ out in the open or a 3+ if you Jink, turning the ‘Fish into a pretty difficult target for the enemy. Note also that the bonus stacks with Stealth (from Night Fighting a Ghostkeel Wing, Conqueror of Cities, etc) for some crazy tough vehicle action. Since the Devilfish’s main job is to transport your dudes, not output damage on its own, I consider this upgrade all but mandatory even at 15pts. Sensor Spines are also incredibly useful for only 5pts, as they let you completely ignore terrain of all types.

Automated Repair Systems are also cheap at 5pts and give you a 1/6 chance to undo an Immobilized or Weapon Destroyed result each turn (and without giving up your shooting, as a Rhino would.) Since it can’t heal lost HP I don’t consider it particularly worthwhile, but if you have a couple points left in a list it’s not the worst thing you could buy. Flechette Discharged is a little pricey at 10pts but does a S4 hit to every in contact with you at I10, which will occasionally knock models out of the fight to save you or just cause a little bit of attrition. Again, not exciting but could have some uses, especially in the context of a “Fish of Fury” strategy. Blacksun Filter, Advanced Targeting, and the Point Defense Relay are all designed more for battle tanks, not transports, and aren’t really very efficient on a ‘Fish. Decoy launchers, at only 3pts, aren’t horrible (4++ against any Interceptor weapon, even when fired normally) but probably aren’t needed, either.

Devilfish are available on their own in the FA slot or as a dedicated transport for Strike or Breacher Teams as well as Pathfinders. This is worth remembering mainly because it shifts their unit role, allowing them to benefit from Objective Secured in a Combined Arms detachment or to avoid giving up points during The Scouring. 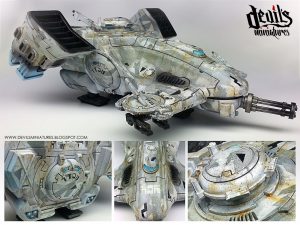 While a Devilfish can pack a decent punch in its main guns, the chassis itself is not really costed such that you can use it as a combat tank. Instead, think of your Devilfish as wonderful protective shells for keeping your troops alive, as this is what they’ll usually do. This can be hard to accept given the price tag, but since Tau troops themselves are quite cheap I usually find that the cost of a Devilfish + passengers is typically about the same as what you’d pay for a lot of Imperial vehicles. The 3+ Jink (or even regular cover) save is a lifesaver for what are otherwise some incredibly fragile models that are carried inside it, which goes a long ways towards mitigating one of the Tau weaknesses. If your Fire Warriors aren’t cowering behind some sort of fortification, you’d damn well better buy them a ride so that they will have a chance of making it to the end of the game alive.

Most of the tricks of making good use of the embarked units are discussed in other articles on the relevant units- Breacher Teams and Strike Teams are both relevant here, as the basic idea is the same- use a Devilfish to get to close range and then unleash hell on the enemy. However, there are also some tactics unique to the Devilfish itself which deserve mention.

The first one is the use of Flat Out. Now, this tactic isn’t exactly unknown to players of other factions, but it has some special relevance for Tau since the Devilfish is rather tough to bring down as well as usually being paired with a fragile unit inside. The basic idea is thus: you start out with the unit you want to protect sitting somewhere on the field with the Devilfish nearby. During the movement phase, your Devilfish moves out of the way of the protected unit (if necessary) and allows it to shoot, then uses its Flat Out move to interpose itself between the enemy after you have finished firing with that unit. This tactic, sometimes called “powersliding,” is especially effective for something like Pathfinders that will otherwise be a priority target for the enemy. Remember that you can’t use it the turn a unit disembarks from the vehicle, though you are allowed to change the vehicle’s orientation if you wish.

Also keep in mind the size of the Devilfish chassis for other LOS-blocking purposes; Crisis Suits are typically small enough (and the ‘Fish bulky enough) that they can safely hide behind one when needed, though this will depend on what unit the enemy is firing at you and how you modeled your flight stands. But even just getting a mobile cover save can be great for Stealth Suits or Commander Shadowsun, to net that 2+.

Another handy thing to remember are the vehicle’s Gun Drones. Like other drone units, the squad from a Devilfish is perfect for being an inconvenient hassle for your opponent- they may not be scoring, but that doesn’t mean they can’t get in the way and cause problems. Whether it’s blocking charge lanes, clogging up the path to an objective, or just hanging around throwing in Supporting Fire shots every time something gets charged, drones can make a right nuisance of themselves when used properly. And remember: as passengers that treat the Devilfish as an open-topped vehicle, they can use Supporting Fire even when embarked.

Also keep in mind that while Devilfish can’t embark any model with a battlesuit, they are capable of carrying not only drones (whether part of another unit such as a Strike Team or a unit unto themselves) but also Kroot and Ethereals as well as some of the other “miscellaneous” units from the Tau codex. Although the days of stuffing five Greater Knarlocs into one are long gone, units of basic Kroot infantry can hide inside a transport in a pinch- especially if you need to shuffle them off to another portion of the battlefield in a hurry.

The Devilfish is available in a number of formations in one form or another, but the most notable one is the Counterstrike Cadre. Composed of three Strike (or Breacher) Teams and a Pathfinder Team, all mounted in Devilfish, it gives you an excellent “fast response”-style set of units that can dish out a fair amount of firepower and have some pretty good abilities attached to them. Most other formations have only a limited interactivity with it, though we might also note that a Hunter Contingent can use the Devilfish + drones as two of the units out of the three required to Combine Fire for a +1BS bonus. 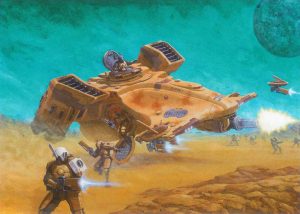 The Devilfish is a solid workhorse-style transport vehicle; it probably won’t ever blow you away with its performance and you’ll probably wish it was 10-20pts cheaper, but it does a very acceptable job of protecting some infantry models and that’s really all you need out of it. Whether carrying a unit, blocking for a unit, or just sorta pew-pewing at the enemy while it waits for the game to end the Devilfish is a stolid vehicle that can weather most fire while being ready to deploy a devastating counter-blow of its own. If you like making zoomy noises but hate playing weird androdgynous space elfses, the Devilfish might be right up your alley.

Whether you’re looking to start a new army or expand an existing one, Frontline Gaming offers up to 25% off on GW products everyday.

Leave a Reply to Vankraken