Well hello there, Ibushi back again to talk about some more pointy eared pirates. Our journey through the Doom of Mymeara now takes us to a unit you likely have not seen on the tabletop for a long while, if ever – the Vyper jetbike. Be sure to check out the Tactics Corner for more reviews, analysis, and great articles by the Frontline team.

Exarch Asurna led the troop forwards through the outskirts of ruined temples, Avenger catapults poised to sling shuriken at the slightest sign of ambush.

For days the Webway Strikeforce had been clearing a path through this fallen city, searching for illicit portals used by the Dark Kin for their nefarious purposes, and sealing them with runes of power in preparation for re-colonization of the planet by an Exodite party.

Stepping out of the rubble into a wide boulevard, Asurna perceived a host of shadows drifting back into darkness at the horizon of her gaze – she immediately called the Strikeforce to her position, sensing the imminent counter-offensive their actions had triggered. Sure enough, the pointed prows of Venom transports emerged from the gloom, energy fields flickering as they accelerated towards the Craftworld Eldar, splinter cannons beginning to wildly spit a hail of fiery shards.

Asurna led her warriors into defensive positions to receive the enemy as they had done countless times before, supported now by Farseer Ilendil and his Guardians, War Walkers, and Wraithlord Danash. Before the Strikeforce could open fire on the lead Venom, horrible keening screeches, blood curdling screams, and the jarring noise of hooks scraping wraithbone burst out behind them – dark, slicing shapes swooped overhead, cruel hooks taking the arms and exposed flesh of Guardians with them, and splinter fire catching Asurna’s warriors unprotected at close range. In the midst of this horror, the advancing Venoms engaged their Star Engines to explode down the boulevard…

So there’s basically no good reason to take this unit in a Craftworlds list, it is 40pts for an AV10, 2HP open-topped skimmer with a scatter laser. Or you could get 2x scatbikes for 54pts, with double the firepower and better everything else… choice is yours. It can be a fairly cheap platform for the likes of dual shuriken cannons (50pts), or shuriken cannon+starcannon (55pts), but since the Vyper has to hover up the table from turn 1 to get into range and is armoured with nothing but used Eldar tissue paper, it is more likely to get gunned down by Drop Pod stormbolters than do anything useful. Now with the Corsair Vyper Squadron there are a few changes that make the Corsair version more palatable, particularly in lower point games. Firstly, these scout vehicles actually get Scout! This is great, especially since it’s a free upgrade, and allows the Vyper to take more of a utility role. For starters, the Corsair Vyper can deploy aggressively to keep back infiltrators or threaten other lightly armoured units with its many shuriken, then scoot backwards to stay out of trouble, the “fake out”. Or do the same but Scout forwards to get longer range on its weapons thanks to 12” of free movement. Lastly, Scout allows the Corsair Vyper to Outflank, coming in and nipping at the enemy’s heels, and providing lots of tactical options.

The second main change to the Corsair Vyper is that the underslung shuriken cannon upgrade got extortionately expensive (20pts?!), but it can take a splinter cannon instead for the regular +10pts and can exchange the top cannon for a splinter cannon for free – not too shabby. What we have now is a 50pt outflanking Venom-equivalent, capable of pumping out 12x poison shots at BS4. Pretty good at bargain basement price. While not a wonderful S6 shuriken cannon, splinter cannons are lovely for the Vyper as they grant that all-important 36” range, helping immensely to keep the jetbike out of trouble. Other weapon options include starcannon/bright lance or dark lance for +5pts, and Eldar missile launcher for +15, but probably better to pass on the last one.

Thirdly and finally, Corsair Vypers may be equipped with void burners (for Deep Strike), a kinetic shroud (for a funky invulnerable save), Star Engines, or Chain Snares. The only upgrade here that catches the eye would be Chain Snares, at just 5pts. If my army ever has a few extra points, this is a fun place to put it, as it grants the Vyper the ability to Tank Shock despite not being a Tank. Pretty useless if you plan to start on the board and shoot things, but when combined with Outflank, this can be surprisingly hilarious as your Vyper jetbike comes in from the corner and Tank Shocks an enemy unit right off the board. Of course if the sergeant has a melta bomb, say goodbye to your Vyper when they pass that morale check and Death or Glory you back to the webway. 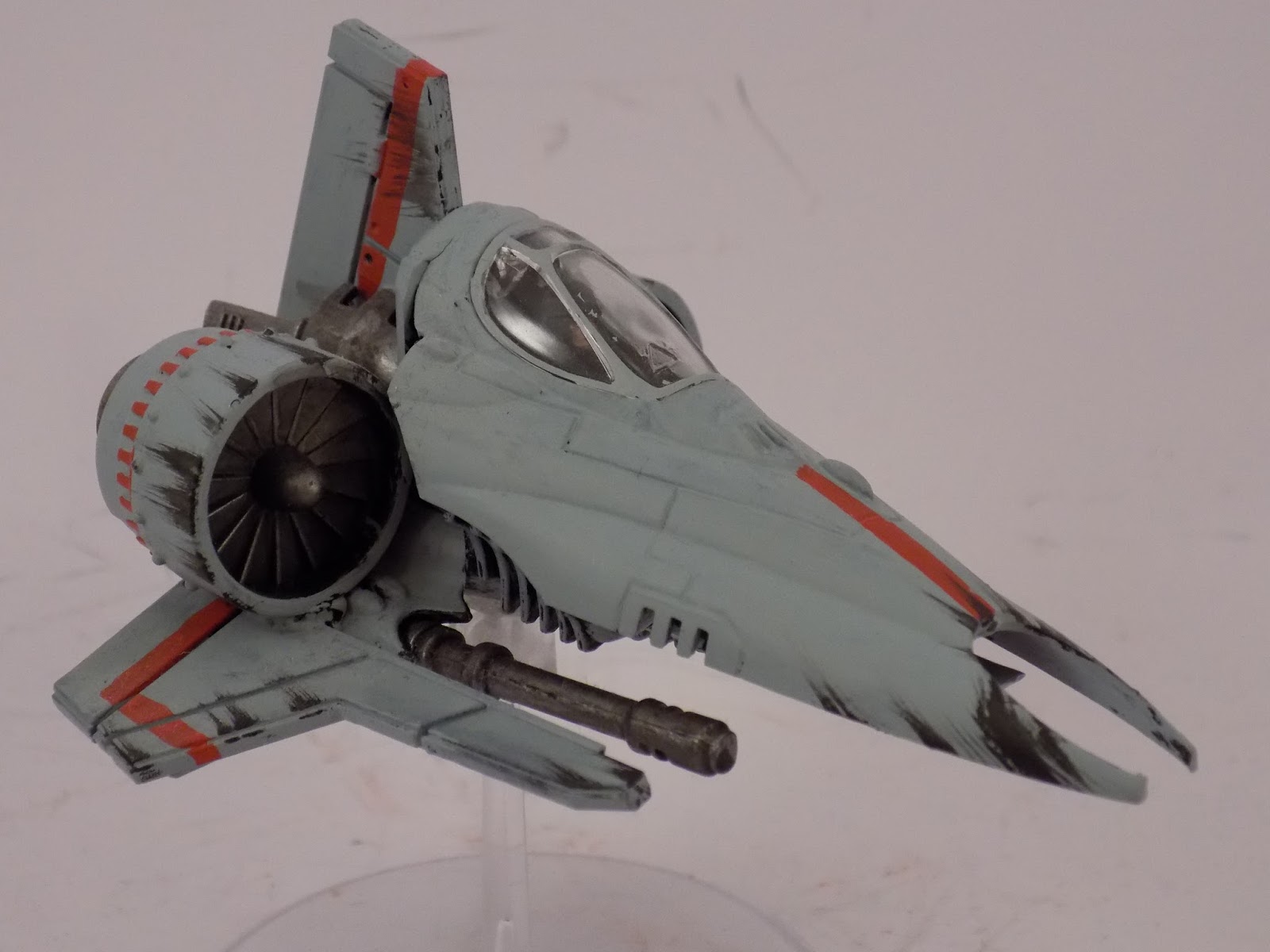 In an 1850 tournament setting, Corsair Vypers are not going to be heavy lifters, and you have to play them really, really cagey as bolters will kill them (if you have the cojones to play them at all), but with their newfound Scouting abilities and weapon options, there is one thing they excel at – outflanking and shooting up infantry. For 40-50pts it is a very cheap throwaway unit that can be useful at hiding in the opposite corner to the rest of your forces to score linebreaker or table quarters, while plinking away at 36” with poison shots. Eldar and especially Corsairs can suffer from low unit count armies in lategame, so a 40-point unit can be a good investment just for that. Coming in as far away from the rest of your forces (and trouble) as possible, hugging terrain, and then just surviving to score objectives, quarters, linebreaker, whatever you can, it’s actually an OK investment.

Finally, if you do go for the allied Corsairs approach to do a Freakshow or other leadership-shenanigans style list, the Vyper is actually well worth it as a sneaky 45pt tank shock platform that can come in and take advantage of stacked negative leadership modifiers to roll units off the table. A classic would be the Grotesquerie deep striking in via Webway Portal, with attached Archon with Armour of Misery and Corsair Prince with the Mask of Secrets – a total of -5 Leadership to nearby enemies, ripe for the Tank Shocking!

Hornets can fill this role even better thanks to Acute Senses and AV11, but they do come in at double the points. Sometimes you have to go quantity over quality! In this case, the Corsair Vyper is your jetbike. 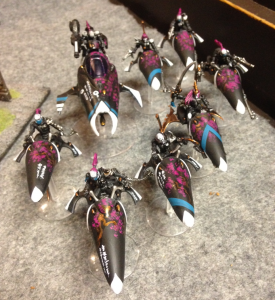 More than likely your Vyper will go down in a flaming wreck the first time someone shoots at it, but with these new rules and upgrades, I’ve brushed mine off, given it a lick of paint, and put it on the table at least 4 times so far, and to good effect. The Corsair Vyper really excels at the Kill Team level, where AV10 can be surprisingly good, and where Scout, Outflank, and a boatload of shuriken go a long way. Undisputed murder machine of our local Kill Team campaign, the Kaizoku Corsairs Vyper will soon be repainted with a full canopy of kill markings, and looks forward to many more moons of slaying the mon keigh.

Asurna fell back with the Strikeforce into a nearby temple, finding new cover and regrouping with Farseer Ilendil, but only a few Guardians joined them at the broken walls. Rather than killing her kinsmen, the pirates were snatching Craftworld warriors in swooping attacks, ensnaring them and flying away to deliver them to some cruel fate, cackling like crones.

Wraithlord Danash was too bulky to hide in the ruins, and was raked with splinter shards, his wraithbone skeleton beginning to mortify and peel away. Taking advantage of the pirate focus on Danash, Ilendil brought his War Walkers around to send a storm of scatter laser fire burning down the boulevard. At first the lasers glanced and bounced from the shields of the closing Venoms, but the intense firepower gradually penetrated, sending two of the ships spiraling off course in sparking wrecks. The Corsair pirates continued unhindered, joined now by shadowy infantry from either flank casting disorienting shadowwave grenades to cover the advance on the ensconced Eldar.

As the Corsairs gathered their strength to breach the Craftworld position, Asurna sending shuriken through the torso of the nearest pirate, with a roar Uldenar’s disciples of the Bloodied Spear exploded from the shattered ruins to the right, blurs of white fury, laser lances blasting apart Corsairs left and right, jetbike steeds crushing bones, Exarch Uldenar’s flashing blade quickly felling several cowering pirates.

Asurna charged from the ruins, Diresword outstretched and banner flying, feeling the power of her Ancestors bringing Doom upon her corrupted kin, the burning call to shed blood, and the press of her warriors entering the fray behind her, laying down a blistering volley of shuriken into the emaciated, drug-laced forms. Plunging knives into sickly flesh, the Avengers became the wrath of Ynnead Unborn.

This world will yet be brought to light once more…