A pure Genestealer Cult army is a site to behold. Tons of bodies on the field, phasing in and out of the battle, shifting left or right, and getting right into the opponents face. Its a ton of fun, an army you need to watch out for, and will be at a local tournament near you. Lets check out a recent battle I had and some initial thoughts after playing it a couple of times.

Subterranean Uprising
4×5 Acolytes
2×5 Metamorphs (Might have been one, can’t remember but it was even on points.) 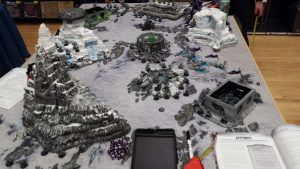 My latest game was against a newer player who is trying to make a splash to the competitive scene with a Harlequin/Eldar mix.

Think that was it. 🙂

In going second I wanted to see if I could withstand the firepower from the Eldar force, control the table, and score maelstrom. I set up heavily forward and had the Eldar forces boxed in their deployment zone. She started with her Warphunter, Wraithknight, Harliestar, and some Scatbikes on the the board. I started with everything infiltrating using Cult Ambush. The First Curse was center in a ruined bunker with the Magus and Icon side on the right and the Primus on the left. Lots of other squads in terrain and some up close to take advantage of the extra shots. In all I rolled 2 6’s and 3 5’s for my Cult Ambush roll. It is still ambiguous but we played it so that only my two 6 squads could assault on my first turn. She pummeled the squads that could charge and some others as well. Her Harliestar massacred my Magus and Icon squad with 10 Metamorphs, wiping them out. I wiffed pretty good on my attacks, even with Counterattack from my Patriarchs Warlord Trait. My first turn was somewhat lackluster as I could only shift and move, taking some pot shots with my squads. I did take out one 3 man Scatbike squad though. I also removed a ton of my forces that had rolled 1’s or didn’t need to be on my objectives to come back, also taking off two squads that hadn’t been completely wiped out. 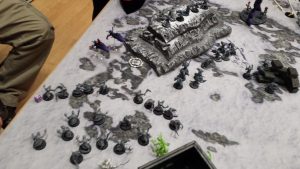 Turn two was very different. She continued to pummel my forces and the Harlie star wiped out a 10 man Acolyte squad with all of her reinforcements coming on. She pushed on both flanks, trying to push me back and did some good damage, but some good cover saves kept those squads safe overall. On my turn I rolled a couple of 6’s on my returning squads and set those up to go after some Scatbike squads. The First Curse came out of the bunker and charged the Harlie star wiping it out. It was pretty brutal. I failed both charges on the bikes, so there was that. I also took out the rest of the units that came on my right flank with Cult Ambush squads reinforcing what was there already. 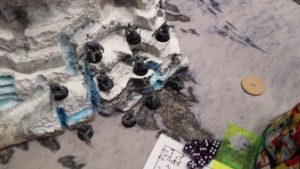 With the collapse of the right flank, She withdrew to the corner and made short work of many of the units that were right in her face and tried to take out what she could. One mistake we talked about later was in her keeping her Wraithknight back as much as she did. I felt it should have been out at least a bit more to take out some of the smaller squads and keep them from flicking out and reinforcing again. I pushed forward and stunned the Warphunter with my Neophytes and boxed her into the corner. 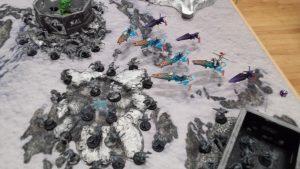 This time she continued to hole up further into the corner and I pushed forward again, killing another Scatbike squad, also securing as many objectives as I could. With most of her forces crumbling and me closing in, we decided to call it. 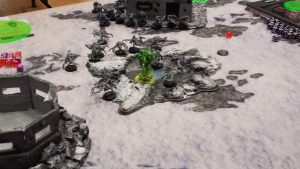 One thing that was interesting was that I typically fear the Warp Hunter, but this time, I wasn’t so worried. Losing a handful of models was no big deal, and even losing most of the unit didn’t matter all that much as I could take them off and reinforce next turn. She is a newer player and working to be more competitive and one of the things she has learned was to protect the Warp Hunter. I think that was a mistake overall as she had to use her Scatbikes to bubble wrap them. I knew I had to take out her Scatbikes and so focused on them as much as I could to force morale tests and whittle them down as their massed firepower is what worried me most. Her key mistake was leaving her Harliestar to close to my First Curse and losing that unit in the charge. It could have done a lot of damage to my smaller squads had it been able to roam free. 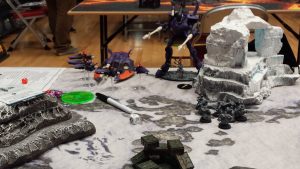 Thoughts on Playing the Cult

For playing the Cult, a mix of MSU and fuller squads is probably best, but I worry about time management. That first mass infiltration is a bit overwhelming and I need to find some ways to manage that on and off the table. I’m thinking about colored beads for my units that have 1-6 on the bottom so they show and place those next to squads when they come in so I can remember who and what was placed where. I’d use one color for the Uprising and one color for the rest. That might work. I think I might also have a chart and grid for rolling and recording that first turn or two as well.

Going second wasn’t so bad although against an even more shooty force it could get bad as only having the ones that rolled 6’s being able to charge that first turn was limiting. It was neat to not care about losing squads or models as you had so much more and could also reinforce them by pulling them off and coming on next turn.

I also loved being able to pull units off the table and reinforce the other side. In one of the turns above, I removed 10 Neophytes, 5 Acolytes, 2×10 Acolytes and some Metamorphs from my right flank and then came barreling on the left flank. Nothing needs to sit and wait or move and shuffle to get to the other side as they have the chance to move the entire distance of the table to get elsewhere. The mobility is great.

Thoughts about Playing Against the Cult

I think my main thought that might help players facing a horde army like the cult is one word – focus. If you are going to shoot or attack a unit, focus on it until it is dead or if you can at least stop them from retreating by being within 6 inches. Focus on the power units such as the Magus, Icon, and Primus. You may have to feed the First Curse units to slow them down, using 5 man Scout squads to line up in front of them, blocking their path.

Also, utilize their lack of obsec as it doesn’t matter if they set up on an objective if you just push next to it or tank shock through them. Don’t be afraid to flee if it will put you in a better position later turns. There is a bit of luck in the Cult as you need to get those 6’s to get those charges off. 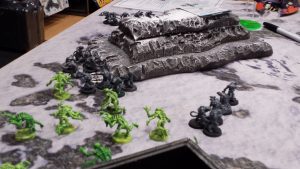 So there you have it! Some thoughts on the Cult and what they are capable of. You will probably see them allied with Tyranid or IG flyers as that is something they lack, but the horde Cult is a real force to be reckoned with and a ton of fun to boot so far.

Have you tried taking a CAD so you can include more promises to maximize the sub uprising formation?

Not yet. I’m liking the decurion bonuses so far.

You’re right about surviving a turn against a shooty army. It’s not difficult for a lot of shooty armies to be able to comfortably remove 40-60 models in a turn. So if you’re not careful you can lose all your HQs in the first turn and be in for a real tough time. I’ve found that the Patriarch bubble is the most important part of the army, followed by the Primus hatred bubble, and a far third is the fnp, furious charge bubble.

Being able to tie up a big shooty unit with a fearless group of neophytes is a lifesaver. Even if it means your patriarch doesn’t do anything but just stands around shouting encouragement to a flank of the battlefield, you really need him there.

Excellent point. i’m still getting used to all the bubbles and force org multipliers this army has.

Just starting to build my own GSC army, so these batreps and reviews are very much appreciated. Thanks for sharing!

You are welcome! I know there isn’t much for pure GSC tactics out right now. I hope to have some video batreps soon.

That would be great. There definitely is a lack of GSC tactics and batreps, maybe because it’s an army with such a big model count it’s a time and money consuming effort to build it? I know mine is only halfway finished yet and I’ve been at it for over a month now.