Phat J here to talk about the latest GW release, Planetary Onslaught, a compendium of several previous campaign books that have been updated for the current game and includes some new goodies that will make any story driven gamer very happy.

So what exactly is Planetary Onslaught?

Essentially what Games Workshop has done is combined the books Planetstrike, Stronghold Assault, and City Fight into a single book for ease of use.  The book is divided up into three sections with each section dedicated to each of the above mentioned books. In each section you are given different ways to play the game with custom missions, warlord traits and campaigns.  Bringing it all together is a new campaign mode called Planetary Onslaught which lets you put all three campaign modes together into a mega campaign.  Pretty cool and gives you some new stuff if you already own the three books that are in this compendium. 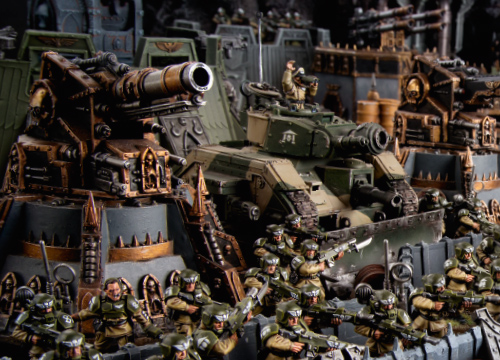 What a lot of players might be interested in is the consolidation of datasheets for fortifications that have spanned all three of the books mentioned above but also for fortifications that have come out since such as the Tau Tidewall and the Munitorum Armoured Container. For the most part the rules are all the same and they did put some clarifications in especially on the Void Shield where they finally cleared up that a unit had to be entirely within the 12″ bubble to receive cover from the shield.  Strangely enough the new Haemotrope Reactors which just came out. I assume that the kit came out after the book had gone to print.

Is This Worth Your Money?

If you an your friends are interested in running a long narrative campaign I would definitely suggest picking this book up.  It gives you all the tools to run the Planetstrike, Stronghold Assault, and City Fight campaigns together in a new Planetary Onslaught mode.  For the gamer that wants to have all of the terrain and fortification rules in one book this is also a good choice as you can quickly look up anything including the new releases. If you have no interest in any of those things above this might be a purchase you can skip.

Did you purchase the book? What did you think?

If you had the book in hand you would realize this is a pretty in depth review of the release.

If so, then that is fairly damning review in and of itself…

Jason phoned it a bit on this one, we’re all super tired with everything that is going on right now.

There’s a lot of cool stuff in here, the big one for me was the fact that you can buy a terrain piece like the Basilica Administratum or Shrine of the Aquila for a very reasonable price point (20pts) and be assured of LoS blocking cover in your deployment zone, and a 4+ cover save. Pretty damn good, IMO.

So why not put a few hundred words into something worth writing about instead?

I’m sure I’m not alone when I say I’d far rather see half as many articles but have them twice as good. There doesn’t seem to be any *point* to writing articles like this one; if something’s released and it’s stinky garbage, just say it’s stinky garbage in ten seconds on Signals and be done with it.

So it really is just the three books sandwiched together, then? That’s… pretty lazy, especially since a lot of the rules in Stronghold Assault and Cities of Death don’t even apply anymore.

They’re not really rules for those they are missions and warlord traits you can use for campaigns.

They advertised it as three books collected together, not much of a shock that it’s what they said it would be 😛

Actually updating the rules could have been a significant change, though- since almost no detachments in 6E or 7E have a fortification slot, creating a dedicated fortification detachment/formation would’ve been an easy option. Likewise, changing the text on the emplacement weapons such that they could choose to use Skyfire (rather than being forced to have it) would’ve made them a lot more viable as options.

There were plenty of issues with the books that would have been fairly simple to solve. Just reprinting them as-is kinda shows off how lazy they are about game design and does very little to encourage anyone to actually buy the book.

One of the allegedly new things here is the ability to buy general terrain pieces for a low points cost. If you recover from all your other efforts I would really appreciate a quick overview of that.

Of course what my kroot really want to know is if they can bring their own forest!

As for the rest: I am genuinely tempted to pick this up to see if I can somehow twist this into the basis for running a narrative tournament.

That is true and it is awesome.

I didn’t have the original 3 books so It’s new to me. One of the things that caught me was the Detachment that I think is called Siege Defender detachment. It’s the base CAD as far as 1 HQ and 2 Troops but it allows up to 3 fortifications. Tau Gun Rigs make pretty good tanks. It would allow 3 on the table. That’s not bad.

Those rules existed, after a fashion, in the original Planetary Assault book. However, ITC specifically forbids anyone from taking more than one fortification, though I still don’t really understand why.

I like that they clearly state in every entry the transport capacity and hullpoints of every piece.
And the small updates that they did.

Uncertain on the bring a whole ruin with you for 20 points though. Housing market have truly chrashed.

Don’t like that they left out the plasma obliterator and the haemothrope reactor (Come on, put them into the void relay network GW)
They did not give the Vengeance batteries primary target 🙁
The rules for the aegis defence line is still not in line with the FAQ! 2 editions of the FAQ stating “must be placed in a continuous line” and they could still not be bothered to put it in the “updated” rules.