You are here: Home › Uncategorized › OpEd: The New Pink Horrors

Hey everyone, Adam here from  TFG Radio! Today our group is bringing you info on the new “split” rule from the Pink Horror unit entry, along with a video.

This article is a combined effort from the TFG Crew.

The new Pink Horrors have provided yet another pivot moment for 40K. Where do we go from here?

The new “Split” rule allows all Pink Horrors killed in a phase to spawn 2 Blue Horrors. They create a new unit, and must be placed within 6 inches of the Pink Horror unit.  When these Blue Horrors die, each one spawns a Brimstone Horror, following the same placement rules.  If a rule would require these models to be removed (with the exception of Daemonic Instability), they still get to use the Split Rule, but must be placed wholly within 6 inches of the last pink horror that was killed.

We even created a video with how the rule would work out:

It clearly says within 6 inches, and well, GW has clarified that if they mean “wholly within”, they will say “wholly within”, so the first Blue Horror spawned needs to be placed within 6 inches of the parent Pink Horrors, but you can then daisy-chain the rest as far as you’d like so long as you maintain coherency.  This means that Blue Horrors can suddenly appear a good deal away from their parents, allowing them to easily contest or grab objectives or block charges.

These units spawn at the end of a PHASE, not turn, so if you shoot at Pink Horrors, the spawned Blue Horrors can stop you from charging in the assault phase as they are a separate unit and thus cannot be a legal target for a charge, and you could have never shot them to be able to make them a legal target, so charge blocking for the win. Daisy chain, objective grabbing for the win too.

Blue Horrors and Brimstone Horrors are psykers, so you are generating more dice each time. If you shoot a Pink (who generates 1), and get a few blues, you know have 2 dice generated instead of 1 next turn. If the Blue Horrors get shot, and not wiped out, and create Brimstone Horrors you now have 3 dice when you originally had 3. Extrapolate that out across a formation with 9 units of Pink Horrors and you now have epic levels of Psychic Dice.

So, the problem is that as it is written now, Pink Horrors are about 150 free points.  You spend 90 to get 240 or so back. Just fulfilling a basic CAD with these Pink Horrors means that you are now playing 300 points above your opponent, more or less. If you dedicate to the farm, you can easily end up playing 600-1000 points over your opponent.   Coupled with the fact that almost nothing stops this from happening outside of assault, Pink Horrors are in this form the most dominant troop choice in the game.  Their ability to control and contest as well as survive hails of fire through Split by just creating more units, many, if not all, armies will struggle against them.

To compound the problem more, the Loci of Creation, an upgrade to Heralds of Tzeentch, doubles this. This means that one Pink Horror is now 4 Blue Horrors. That’s just insane.  A unit of 20 Pink Horrors will spawn 80 Blue Horrors before it dies.  That is more summoning than even Conclave can manage easily, all with no rolls of any kind required and with almost no means of stopping it outside of Daemonic Instability.

The question is thus: What do we do about this? 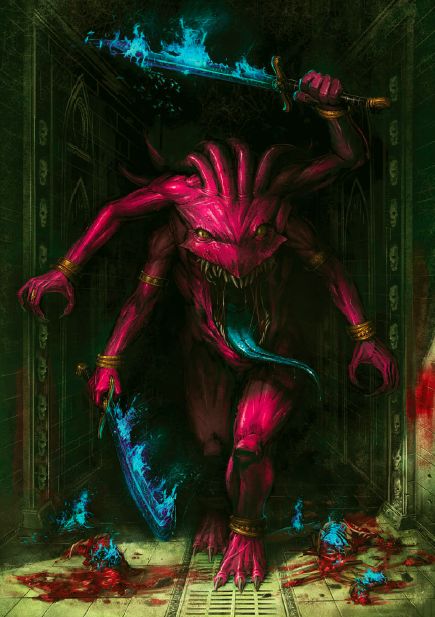 On one hand, we can leave it all alone.  Pink Horrors are not exactly Bloodthirsters, and who has all these damn models, anyway?  Obviously, playing by RAW is typically ideal as GW makes the game, not the ITC, and the less we mess with the game, the easier it is for any person, regardless of format preference, is prepared for the rule and how it is applied.  Chaos needs a win anyway, so at least it is not Eldar/SM getting all the love. This will make the meta shift from shooting to fighty, which helps out weaker builds.

The downside to this is that Pink Horrors are not worthless; in fact, they are already one of the stronger troop choices.  They have a 5++ rerolling 1 save that can easily go to 4++ in a formation or 3++ with the Grimoire. They generate psychic dice, and with Split, they are suddenly generating more psychic dice.  They can be Objective Secured easily, and even if the Blue Horrors are not, you can use the Blue Horrors as effective charge and movement blockers to frustrate and stymie an opponent.

On the other, we can ban Split entirely.  This solves a lot of issues from Split, and suddenly, we don’t all have to see 80 Pink Horrors on the table and 160 (or 240) Blue Horrors.

Of course, the downside here is making large changes to an army, not to mention that Pink Horrors lost access to Malefic daemonology, so you are just making them worse. Also, for those who read the rule and went out and bought 8 boxes of them, that sucks for them.

We could always split the middle and ban the Loci of Creation.  This allows Split to stay (still intense), but not with the insanity of the Loci.

The downside to this is even without the Loci of Creation the unit is massively imbalancing to the game with the Split rule left otherwise intact. As shown in the video a single unit of 20 Pink Horrors =1 Herald is intensely problematic and spawns a lot of models, even without the Loci. 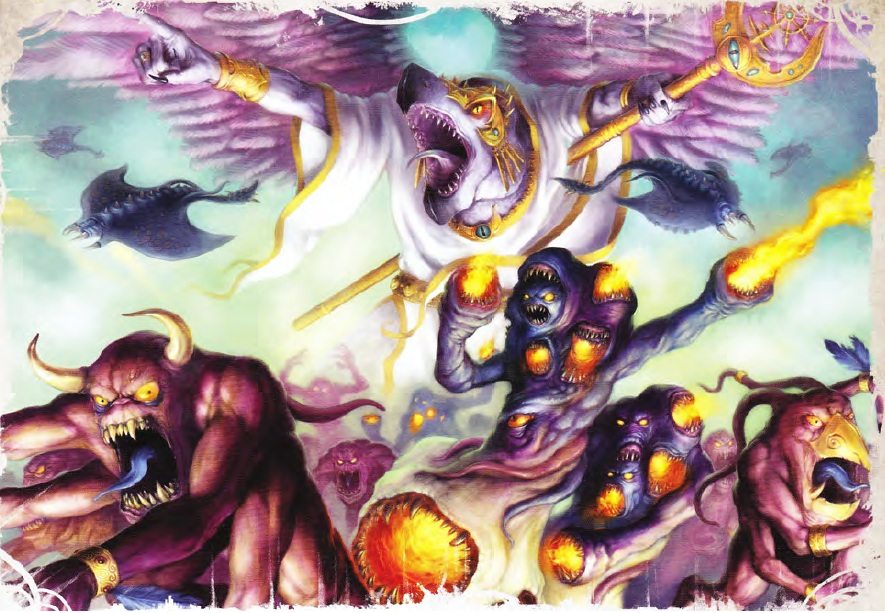 We could also houserule that Instant Death attacks ignore Split, so putting S6 into Pinkies or S4 against Blues will solve the problem easy enough.

This option has the most upside, as there is a lot of Str6 weapons in the game. This will really hurt Space Marines and their equivalents as the current Meta doesn’t support a ton of Str 6 shooting for them. Eldar get a great way to deal with them in Scatter Lasers, which are already good, and we all know how much help Eldar needs to be competitive.

We could make Split dependent upon a dice roll like many things in this game already are. “At the end of the phase roll a single die for any unit of Pink Horrors now subject to the Split rule, on a 5+ the Rule goes off normally, any other result and Tzeentch has frowned upon you and the Rule is not enacted”.

This is in keeping with the spirit of the game as a game dependent upon die rolls for great things to happen. It allows people to still use their toys but without the huge hampering that gets thrown into the mix by allowing the split rule to be used in full.

Another option could be to have the new unit take an instability test at the end of each player turn, including the turn it was created. This is similar to the rules for the Khorne Daemonkin artifact Kor’lath, Axe of Ruin. That rule states that, when the lord dies, a Bloodthirster appears. The downside is that, at the end of every game turn, it must take an instability test. This could result, due to a leadership of 7, in the unit not even staying on the field after appearing.

Hopefully this article, and video, we put together gives you an idea of how the rule works, along with possible solutions for the rule in case you feel it should be toned down.

Posted on December 1, 2016 by Adam in Uncategorized