Recap of the Rockport Invitational 2016

You are here: Home › 40K › Tournament report › Recap of the Rockport Invitational 2016

An awesome sounding ITC event in Maine took place recently and here’s a recap of the fun. Those custom beer mugs are saweeeeet!

A few weeks back I hosted my first ever tournament for 40k. I’ve moved out to the mid coast of Maine and as such I’m hours from game stores that host events, and a good two hours from the best store in the region that I’ve been going to for some time. We have an upcoming annual event coming up, The Standish Standoff, and my playgroup in the area wanted to get some practice in. I happen to have a pretty large basement, a number of catering banquet tables for work and had purchased a number of sheets of sanded plywood as table tops. We figured on rounding up 6 players, and maybe we would get 8 if we got lucky.

Turns out a free tournament with BYOB and a BBQ lunch is a great way to draw people in. We hit 10 players, the most table surfaces I could get my hands on for the day. I also had the event scored as an ITC event even though we followed none of the ITC rules, FAQ, or missions. The goal being a warm up event we stuck to the event format for the Standoff. Missions where pre-selected and shared Maelstrom as primary (difference in points forming the basis for primary mission points earned, 0-14). Coupled with 3 secondaries worth 2 points each. Maximum score per mission is thus capped at 20. I spread out the secondaries such that each round had 1 both players could earn and two that only one player could earn. We ended up with a goodly diverse group of lists. Only one duplicate codex, Space Marines, and even then it was different chapters. One of the players brought with him 10 etched glass steins, one for each player with their faction logo on one side and the event name on the other. This really made the day feel like a 5 star event. We didn’t have any kind of prizes as we didn’t take any money, but the mugs made everyone, or at least myself, very pleased with the swag from the day.

During the day I set us up with a bit of tech. We used the Best Coast Pairings app to score and run the event. Once I figured out how to use it it worked like a dream. Sitting on a dedicated iPad for the day allowing everyone to self score and the program to run table pairings. I also set up an old iPhone in a camera clip screwed into an overhead joist. With this I Twitch steamed table 3 all day long. Everyone seemed to have had a great time with the day. My wife has already consented to make this an annual event. Hopefully I can make it twice a year instead.

I had three great games. I ran a slightly modified version of a Tyranid list I’ve been working on for a few months. I call it Boy Band, having 5 flying monstrous creatures and a horde of re-spawning gribblies. I had to retool to lower the model count from 103 to 74. I wanted to be able to get my games at least to turn 5 if not a natural completion in the time limit. So now I’m running 3 Flyrants, 2 Hive Crones, a pair of Malethropes and 3 of the bigger spore bombs, and an Endless Tide formation with 30 of both Gaunt types.

Game 1 had me paired up with Kyle, and his Iron hands in a Sons of the Gorgon decurian. He was running a small Librarian conclave as well as an Armored company and Skyhammer formation. Hello Whirlwinds! We played Cloak and Dagger with Slay the Warlord, King of the Hill and Last Blood. I decided the whirlwinds had to go first thing, they would be able to put to many wounds on the gaunts and prevent them from being able to be effective. So I used the swarm to bog down my table left (top of the picture) and ran the Boy Band on table right to first turn kill a whirlwind and put me in position to kill the second one the following turn. He dropped in a tough Sternguard unit complete with Librarian and Techmarine onto the center of the board (between the two grey buildings in the picture). This would see him earn King of the Hill as I never had the time to dig them out. His Skyhammer pinned in a fair number of my Gaunt units within my deployment zone, leaving me very few options to dig out the center with. We ended up 14/6 my win,

Game 2 I paired up with a player I’ve yet to had the pleasure of matching up with yet. William brought some of the best painted Orks I’ve seen in some time. Of course he also had Buzzgob’s Custom stompa with him. This would prove to be a surprisingly fast game. Both of us being primary a mob force that gets stuck in he drove his trucks right at me, jumped out and then chaos ensued. I’ve rarely faced Orks, its just not been an army anyone in my playgroups have played before. I was completely surprised with how devastating in assault they proved to be. I ended up loosing several units in a single round of combat while inflicting minimal damage back. Fortunately I got lucky on the re-spawn rolls and almost all of them came back. I immediately pushed them right up in front of the boys again in layers to allow him only a single unit to charge on his turn. The Boy band procedded to wipe a couple units and soften some of the remaining boy units up with shooting and psycic powers. I basically ignored the Stompa except during the psycic phase throwing most my dice at Paraxism to lower the BS of the Stompa to zero. This worked about half the rounds and between that and him having a lifta droppa (useless on non vehicles). I was able to keep the Stompa from being overly effective. Here I scored a fair bit better. Having gotten first blood off a truck, hold the line after wiping his units from my deployment zone and being mostly stuck in it myself, and due to the trucks actually scoring more kill points we ended 16/4 my win. 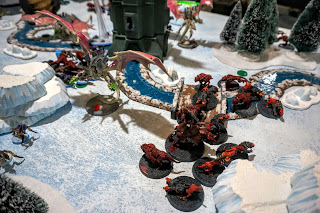 This brings us to my last game against Oliver and his KDK. Dogs bikes and a Bloodthirster to boot. It was epic music battles of history as the Boy Band takes on Khorne Death Metal. Again facing an almost exclusively melee army we got right into fighting it out. I’ve faced Olivers list before. Deploying Hammer and Anvil is always an issue with this list. The re-spawn units coming in from ongoing reserves then have a long hike back out onto the board. Knowing how fast dogs can be and not wanting my softer Synapse providing units to get smashed to early, I ran all my Gaunts out as far as I could to create a charge screen for Olivers dogs. My fliers similarly moved up the table fairly spread out. His Bloodthirster was able to get the first hit in but only managed to get 1 wound on a Hive Tyrant. The Boy band spent turn two finishing him off and softening up a couple of the front most dog units. I then charged or screened the entire front line. Again running if I wasn’t in position to make a possible charge. I wanted to push the first batch of combats as far into the middle of the table as I could. The game was mostly about a slowly moving scrum that started in the middle of the table and worked its way slowly back into my lines. My re-spawning waves would rush forward to take additional charges and begin the fight anew. The Boy Band would focus down whatever unit of dogs was both closest to my deployment zone and not locked in combat. It was a brutal affair and many Gaunts lost their skulls to the Brass Throne. In the end I scratched out a win 10/8.

This put me tied for Battle points with Justin and his Dark Eldar/Eldar list, (mostly Dark Eldar). All in all I had three great games. One of my favorite points of this army is how in all the games I’ve played it has never been a blow out. My opponents always are hanging right in with me all game long. I’m loosing models left and right and although I’ve continued a winning streak with Tyranids (9 out of 9 games), I think my opponents have all had good matches as well. I wanted to end this by thanking everyone who came out to play, assuming your reading this. If I can host a similar event in the future I’d be happy to have any of you back.

Posting will resume again after the 19th. I’ve been behind on painting for the Standoff and have not had time to blog. Although I have painted a fair amount since my last post went up and will have a good amount of content to share once I finish painting this list.

5 Responses to “Recap of the Rockport Invitational 2016”