Ibushi back again with one of those units that has been around for aeons, but which you rarely, if ever, see: the Corsair Phoenix Bomber! For more reviews, make sure to check out the Tactics Corner.

Hanenash swept through the craggy landscape, holo-fields blending with the shadow of towering peaks, wingtips toying with the very rocks themselves. Not every cycle did they stoop to working for the monkeigh; if only the Farseer had decided to intervene herself.

“No matter, any excuse to do what we do best, otherwise might as well live in a wraithbone cubicle like the rest of them…”

She focused back on melding with the psycho-circuits of her sickle-winged bird of prey, swooping out into the plains at the sprawling rear of the renegade horde.

Spying the demagogue’s emblazoned pavilion, Iyesthil sent forth swarms of Nightfire missiles from behind Hanenash, just as she made a brake turn to line up the crew of the nearest siege battery with her shrieking cannons. The crew and their engines were rent into a thousand ribbons of flesh and steel, the swirling Nightfire gas ignited into a roiling frenzy, consuming the Renegade Command in mere seconds.

What does a Corsair have to do to get some action around here? Still better than a stuffy world-ship…

Alright, when Flyers entered 40k proper, to be honest they came off as more of a gimmick, and even after playing the Nightwing for a while they never seemed serious to me, at least not compared to Flying MCs. Then one day my wife turns up with a Voidraven Bomber kit as a very well-intentioned gift, and I’m confronted with that affirming but also sinking feeling, unique to receiving something you want to love but just can’t. Fortunately the model is really great, and so in an effort to at least give it a shot for my loved one’s benefit, I decided to convert it up and try out the Corsair Phoenix Bomber rules. With our local GT coming up soon, I dared myself to try out the aerial oddity and see what happened…

Fast forward 3 months and holy crap this guy is the new love of my 40k life, forget everything I’ve said about Flyers!

The Phoenix Bomber is the 3HP big brother of the famous Nightwing Interceptor, with AV10 all round and Deep Strike, Supersonic, the crucial Vector Dancer, and, to top it all off, Stealth. While it loses Agile and that Nightwing’s sexy 2+ Jink, the Phoenix instead brings Strafing Run for BS5, and a truckload of weapons: two shuriken cannons for 6x s6 bladestorm, a pulse laser for 2x s8 ap2 shots, and two phoenix missile launchers for 6x s5 ap3 shots. (You can also swap the Phoenix launchers for Nightfire missiles, which are s4 ap5 heavy 3 Ignores Cover Blast. Pretty nasty, just can’t shoot them if you jink, and it costs +10pts, so I never do this.)

Clocking in at just over 200pts, the Phoenix is a hefty +80pts over the little Nightwing, and combined with the fact that you have to sell your first child and most of your kidneys to get the resin model from Forgeworld, this is why you rarely see them on the table. However, in practice this guy is worth every single point (but not a single point more), for the fact that not only does he get more delicious shots, but he also hits with virtually every one thanks to Strafing Run. This puts the Phoenix leagues above the Nightwing, and pretty much any other attack flyer in my books. This guy will literally obliterate an entire squad in the open. Fortunately we also have tricks to ensure that this is where you catch them!

Now do watch out, as since the Phoenix has 5 weapons but Flyers are only allowed to shoot 4 at full BS, you will have to Snap Fire one each turn. Kind of lame, I didn’t notice this for a while myself, and FW most likely didn’t catch this either, or would have consolidated the phoenix launchers into a single system, oh well. Even so, at Bs5 with most of the shots, that is reliably 6 dead marines, and the key there is reliably. 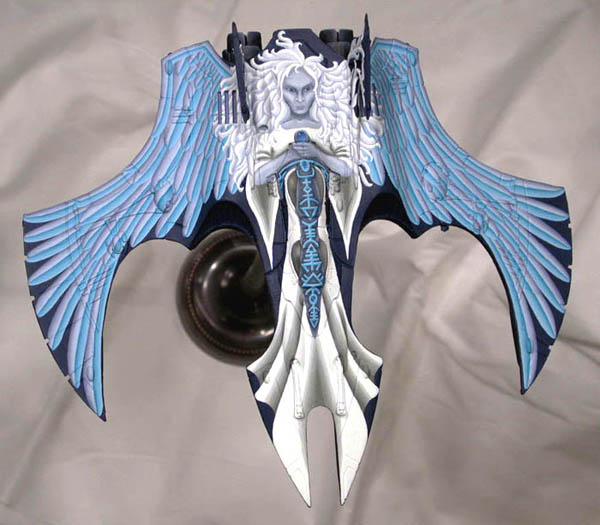 Oh, just 6 dead marines a turn for 200pts you say? OK not exactly mind-blowing, but there are some huge factors at play here, which you simply cannot theory hammer: using Sky Burners deep strike to create Angles of Death.

One of the great shortcomings of even Vector Dancer flyers is that they only come on from Reserves 36” and turn 90 degrees to shoot, which a good general can mitigate a lot of the time, and which Hammer and Anvil will mitigate 90% of the time. By contrast, you drop the Phoenix bombs wherever you like, from whatever precise angle suits, and with only a D6” scatter and BS5 shooting, you can be confident that this bad boy will perform as expected.

The angle of death is where you drop in your Phoenix at such a position to cause maximum mayhem, and this will most often be by landing from behind for rear armour, catching units out of cover, and particularly sniping the enemy Warlord or other key characters. Thanks to being able to position pretty much anywhere you like on the table, the opportunities are endless, and thanks to BS5 you can feel pretty good about causing a lot of pain. Also don’t forget Pinning, as this one can occasionally be the final deal sealer. 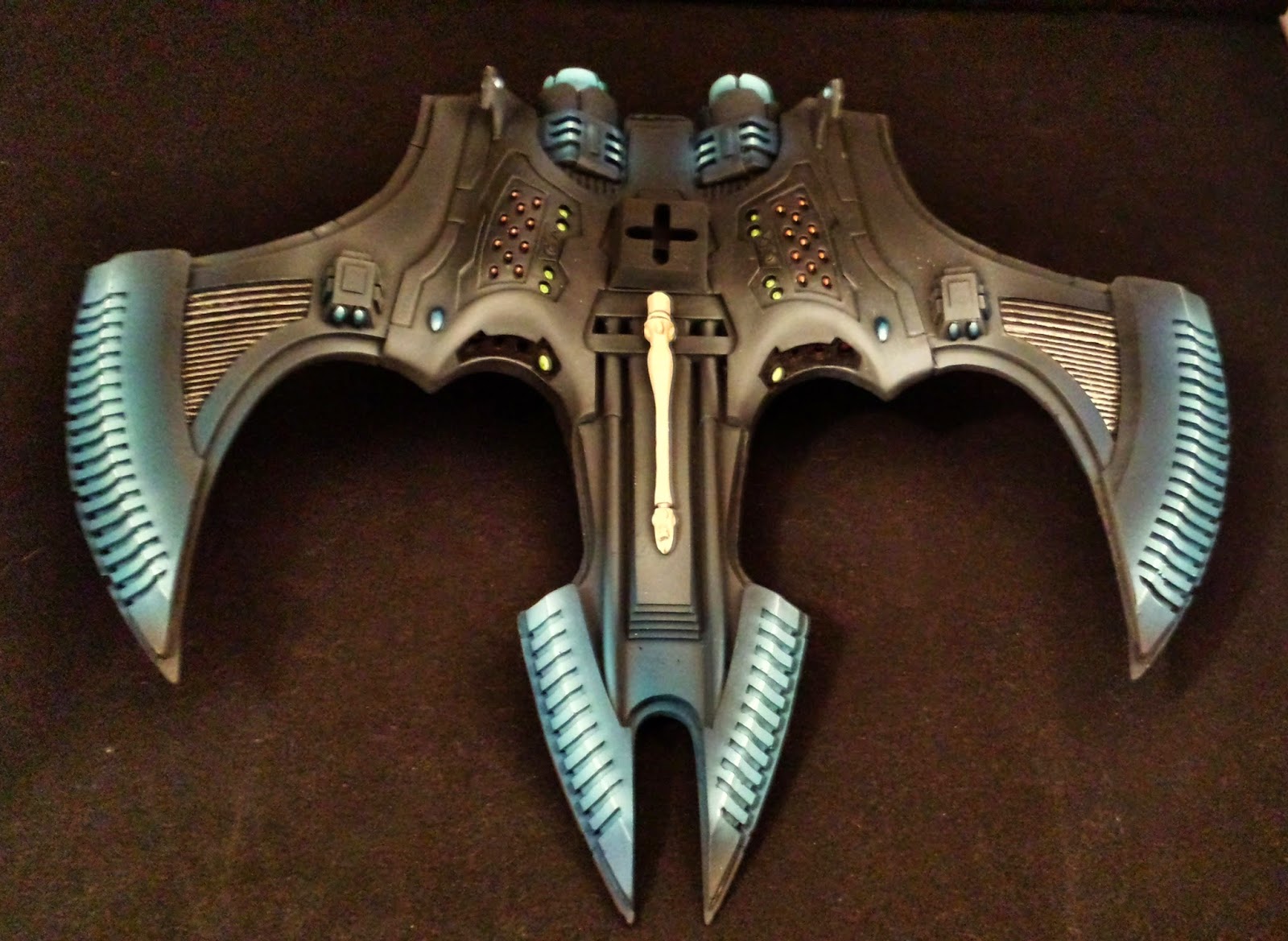 What I especially love about the Phoenix is that the armament it brings to the table pairs so well with doubling out characters all over the map – shred the fodder with shuriken salad, pound the rest with phoenix missiles, and then finish the lonely character with s8 ap2 to tap him out in one shot. Farseers scry their runes in fear of this phenomenon, even Space Marines quiver at the shadow of a pulse laser, coming from they know not where!

Secondly, advanced Angles of Death further take advantage of terrain and positioning combined with the Pheonix’s innate Stealth to get a 4+ or better cover save without having to jink against any return fire. Against small arms like gauss or bolters the naked 6+ and 3HPs is enough to fend off death by glances, but if there are scary weapons then definitely get some intervening models and use Stealth to benefit. Actually this is where the Nightwing really shines – drop the Phoenix to bring the pain, then drop in a Nightwing as his wingman to obscure him and provide some supporting fire. Super fluffy and super effective, plus as Flyers they don’t seem to be able to cause each other to Deep Strike mishap, their bases can be overlapping. (Can a Nightwing perch on top of a Phoenix? Like a parrot on the Captain’s shoulder maybe? Let’s say yes…)

Last but not least, the Angle of Death should always keep in mind where you want your Phoenix to go next turn – set up so you can get your nose onto another important objective next turn, or vector dance to get some side armour. Knowing how to drop the Phoenix to ensure not one turn but 2-3 turns of solid firepower will completely turn around a Corsair game. He pairs particularly well with outflanking scatbikes, which can come in and pop transports and block access points – once the contents spill into the open, the Phoenix lights ‘em up and that’s that. At the inaugural GT of my kitbashed Corsair Phoenix, I was not expecting much – to my surprise, the Phoenix ended up being MVP in several games. He obliterated backfield Warlords, demolished scoring units out of charge range of the Princes, and laid out entire units of Space Marines caught with their pants down. In one really clutch display of aerial prowess, he shot 3 units in 3 corners of the board in 3 successive turns, ultimately shooting a hole in the enemy bubblewrap just big enough for jetbikes to turbo-boost in and seal the game. Sick! 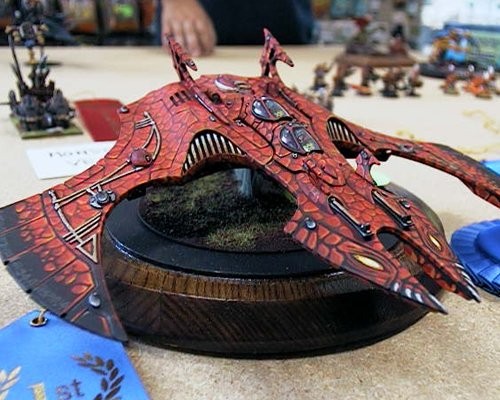 The icing on top is that, with or without Death from the Skies, this guy is still King of aerial combat, as he is a special FW-only flyer class, and his weapons have the range and punishing power to deal with ground and air targets alike, be they flyers or FMCs. After seeing this guy tear apart the key elements of my opponent’s army while burning in from low orbit on wings of fire, I cannot imagine running Corsairs without him… Completely unexpected, and such a blast to roll with – definitely try him out!

Next week we’ll be back with more Corsair Shenanigans: another classic Eldar unit you probably haven’t seen in a long, long time, but which has a nasty new trick up its sleeve. Until then!

As Hanenash brought her firebird about, two enormous wings of glittering blue stretched out from amongst the charred remains of the Demagogue’s pavilion. Before even the Eldar pilots could react, psychic energies exploded around them, and the beast hurtled towards upwards at their exposed low altitude, claws extended and beaked maw screeching.

The Phoenix and Daemon cavorted above staring hordes of monkeigh, claws raking the hull of the sleek flyer before Hanenash bucked to safety in a hull-wrenching twist. Turning sharply outside the now ungainly beast’s flank and coming back around before it could escape, Hanenash sent a screaming hail of shuriken through the creature’s wings; pulse blasts narrowly missing its twin heads.

Again the enemies circled in the air, psychic bolts and raking claws coming closer and closer to the dancing Eldar fighter, but as Hanenash corkscrewed upwards and briefly flew between the beast and the burning sun, with the Phoenix’s shadow flew a cloud of missiles guided by Iyesthil, raining down upon the Daemon’s heads and consuming it in pervasive fire.

Rising from the flames of destruction, Hanenash led her Phoenix back to the heavens, heart thrumming from the ecstasy of true battle at last.

Posted on November 6, 2016 by Ibushi in 40K, Review, Tactics, Uncategorized

14 Responses to “Valkyrie of the Void: Eldar Corsair Shenanigans IV”