Heyo everyone, It is the worlds worst 40k player here, Hotsauceman. I’m here to tell you about the Tau Empires favorite tax unit, Kroot Carnivores. For more tips, check out Tactics Corner for more fun stuff.

Kroot are a race of bird people who evolve by adapting the traits of what they ate. So let’s hope none of them eat Ron Jeremy. They are one of the first races the Tau “uplifted” and make up a vast majority of their scout units. They are a light infantry that is made for assaults and spotting enemies. They are also light skirmishers as well as cannon fodder so real Tau don’t die

Kroot are a very diverse squad. They have 4 different types of models in their unit, each with a different purpose and a different ability to add to the unit. They are primarily used as a tax unit for those who want to get either some Forgeworld units on the table or some Lords of War. Kroot are a tax unit like I said, but they are a pretty good tax unit. What makes them good is how cheap they are and the fact they can benefit from Markerlights. Because Sniper Rounds are the cheapest they can be without being free, I always take them. When with just two Markerlights, you can have 20 sniper shots hitting at BS5 it can get pretty brutal to use. Max squads are always the way to go. Yes they die easily, but with so many bodies and hopefully a good cover save, you can easily survive it, as long as they don’t have Ignores Cover. I typically try to set up mine in a ruin or a forest. To try to get the best advantage you can get. Kroot look like a unit you want in assault, but are actually very middling in it. Yeah their gun doubles as a melee weapon, but at only STR 3 you are not likely gonna hurt much of anything. But if you have a full unit, you can get upwards of 40 attacks in. You are not hitting very hard, but they can be a good tarpit unit. 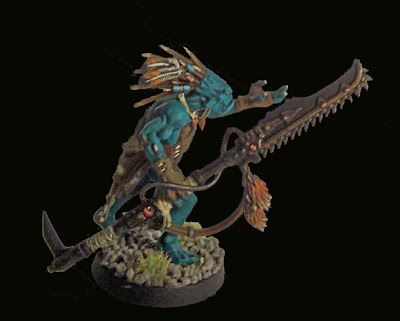 Now, there are two models that are upgrades to the unit that are not seen that much. Mostly because they are still metal, and they are kinda bad. The First is the Krootox. A giant cow with a gun strapped to its back. It is their heavy weapons platform, the problem being that it isn’t that good at actually hurting something. It is only str7 and Ap4. So I say keep it in the foam. But if you want you can take up to 3 of them in a unit. The second is the Kroot Hounds. These guys are pretty cheap and are actually useful to the unit, they have a higher Initiative and can allow you to re-roll when Outflanking, allowing you to get those side objectives you need badly. They also are half decent in assault, with 3 attacks base, and you can take up to 5. So on the charge that is 20 attacks, still str 3 though.

Now, onto formations. They can be taken in both Tau decurions, and in two separate formations. The sad thing is they are not good in either. Inside the Hunter Contingent they can share Markerlights, which is a boon for this formation because you are not wasting Markerlights on Kroot. They can also add  1 to their BS when they do that as well.  In the Dawnblade Contingent, they gain the ability to re-roll to wound rolls vs. one unit. Not bad with Sniper rounds. They are a choice also in the Hunter Cadre. Because they do not have the Supporting Fire rule, they do not benefit from its main rule. You can run and shoot, which is great for Kroot guns. Now, onto the worst formation in the game probably. The Allied Advance Cadre. 4 units of Kroot, 2 units of Vespid. First you have to take Vespid, which are a steaming pile of manure. Then, the Vespid get Stealth(Forests) and the Kroot get Shrouded(Forests). Oh yea and they can finally get supporting fire, only with units from this formation. This is a garbage formation you should forget about.

Kroot are a half decent formation that I personally love to use in my games because they allow me to run other units I can only run in a CAD. But even with being a tax they can be good, Remember to comment below and Frontline Gaming sells Games Workshop product at up to 25% off, every day.

Posted on October 31, 2016 by HotSauceMan in 40K, Editorial, Tactics, Uncategorized

← Army Review: Codex Bad Space Marines (or how I learned to stop worrying and love the Cabal)
Signals from the Frontline #479: Sisters of Battle on the Way? →