Ibushi back again with another rum-guzzling special, this time reviewing the Corsair Malevolent Band, aka purple psycho pirates, the most unusual Eldar unit since Mandrakes. Check out the Tactics Corner for a list of all the reviews and action we have so far.

The raiders had surged from nowhere, rapidly crossing the void to surround the frigate in a cloud of fast moving ships, closing the distance with wild abandon to land boarding parties amidst a rain of Imperial firepower.

Brother Tranton braced his bolter against the bulkhead, and prepared to meet the Xenos breaching party once they cut through the hull, right into a killing field set up by the few Astartes on board. Burning plasma torches sent molten scars running through the hull, then with a flash the cargo bay filled with swirling purple smoke and dancing particles, followed by a series of throbbing plasma detonations. The brothers opened fire into the smoke, anticipating the path of the enemy and seeking to destroy the foul Xenos with blessed bolter rounds.

A lithe figure sprinted to the left of Tranton, emerging from the smoke on batlike wings, and the Astartes immediately pivoted to one knee, sending a bolt round into the enemy’s torso. The round detonated with a crack, shards of xenos armour and a splatter of frothy gore spraying forth – the creature snapped towards Tranton, fixing a burning glare on the hulking warrior, and sending a torrent of shuriken ricocheting off the bulkhead around him. Even in the heat of battle, a creeping cold sensation tickled at the back of Tranton’s neck as he sent two more bolter rounds into the Xenos filth, one punching through its abdomen, the other blasting away part of its shoulder. Yet still the creature came, dropping spent pistols in favour of two wicked curved blades, and leaping into the air to pounce upon the Astartes with a scream of wicked glee.

Malevolents are the Corsairs that have been out in the void partying it up and murderizing monkeigh for a thousand too many moons, and without the ball busting discipline and psychic protection of the Craftworlds, they have begun to lose their cool and can feel Slaanesh literally gnawing at their souls. As every good pirate knows, the only way to go is in a fit of bloodlusting glory, and so the Malevolents willingly become the tip of the shuriken, leading every Corsair assault to take the fight up close and personal, with the secret hope of meeting their end. A murder of Malevolents with Void Dreamer and Prince

At 1pt more than a Space Marine you get a special deal: Guardians with +1 wound, a brace of pistols, and:

For the price of a melta bomb they can also pick up Corsair Jetpacks which grant a 4+ armour save and jet movement, pretty much obligatory. They are also the only unit able to get actual melta bombs for Corsairs, at 1 per 5 models, or you could take a venom blade/power weapon as another option.

On the one hand, the weapons and offensive capabilities of Malevolents are really not very good for the points, and with jetpacks they can’t even move that fast, so most players read the unit entry and choose to pass.

On the other hand, there are two things that the Malevolents can do, and this they do very well:

Without any psychic buffs, Flickerjump, or additional support, Malevolents are probably the “toughest” Eldar unit out there, with a unique 2-wound FNP profile and Fearless. Against 10 Mallys with 4+ armour, it takes 60 bolter wounds to take down the unit, and thanks to Fearless you have to remove every single wound. As such, think of Malevolents as the ultimate distraction fodder, so chewy and full of gristle that it makes the enemy meat grinder jam. Meanwhile, the rest of the Corsairs sneak round the back and shank everyone from behind. Didn’t see that one coming!

In game terms, this is the only Corsair unit that won’t get obliterated turn 1 just being looked at, making them perfect for holding the DZ while you wait for the Sky Burner beta strike to arrive. In many of my games the only units on the table turn 1 for Corsairs are the Malevolents and a Shield Generator or Ghostwalkers, and so far for me they have never been wiped out in one go. Stringing out the Malevolents, using cover saves, Fearless, and a bit of good LOS-blocking terrain, the unit can really take all kinds of punishment and survive, especially with an attached Void Dreamer with shimmershield for a unit-wide 5++ and some nasty powers.

Once turn 1 is over, the Malevolents can kick into kamikaze mode, charging headlong at whatever enemy elements are approaching, and utilizing Reckless Abandon to daisy chain out into as many units as possible to tie them up in combat. While the Malevolents will ineffectively slap the enemy for many turns once engaged, the benefit this brings to the remaining Corsairs is to provide interference and pin down the enemy while the jetbikes get to work. The psycho pirates particularly shine against Drop Pod armies, as they can easily lock up all the infantry, and with melta bombs they will gradually blow up all the Drop Pods to clear out those annoying scoring units. Add a Corsair Prince into the unit and it turns into a real slaughterfest! Now if you are facing anything with mass s6 shooting that can easily touch you turn 1, that’s going to be a lot of dead Malevolents, so don’t even bother starting on the table. Most commonly this would be when facing ye olde scatbike spam, a pretty common sight… For this reason I usually try and buy Corsair Combat Drugs in the hopes of getting +1T for the unit, but it’s a long shot. Oh but wait, Curse of the Void you say? Yes, Malevolents cause -1 Ld to those same pesky scatbikes when within 12”! Rather than a downside, this rule is definitely more akin to a tool in the Corsair arsenal, and changes the role Malevolents play: Deep Strike the unit danger close using the Sky Burners 1D6” scatter, then bring in all the other Corsair jetbikes, skimmers, and flyers from Reserves to target the units now reduced to Ld7, and watch them all run away in true Craftworld fashion!

This ability and the role of Malevolents is also aided greatly by the Rum Slingshot. Drop them down and then use Reckless Abandon to spread the unit out and catch many more Eldar units in the Curse bubble, or use Reckless to reposition and multi-assault across a huge front. Better yet, if your Void Dreamer was unfortunate enough to roll the Corsairs Witchfire power, this would actually allow you to Reckless Abandon twice in one turn (thanks to making a shooting attack in both Psychic and Shooting phases), which can give the Malevolents some impressive board coverage after Deep Striking (12+2d6″). They aren’t afraid to get too close, either, as when threatened by assault these boys can still hop backwards another 6+D6″ Reckless Abandon after Overwatching, bringing their potential number of movements up to 4x per Game Turn, or 24+5D6″, so watch out for that. Last but not least, if you are ever going to use the Aethermancy primaris power Path Ward, these are your boys — those D6″ moves all just maxed out to 6″, giving them a guaranteed 30″-54″ of movement depending what you’re doing. 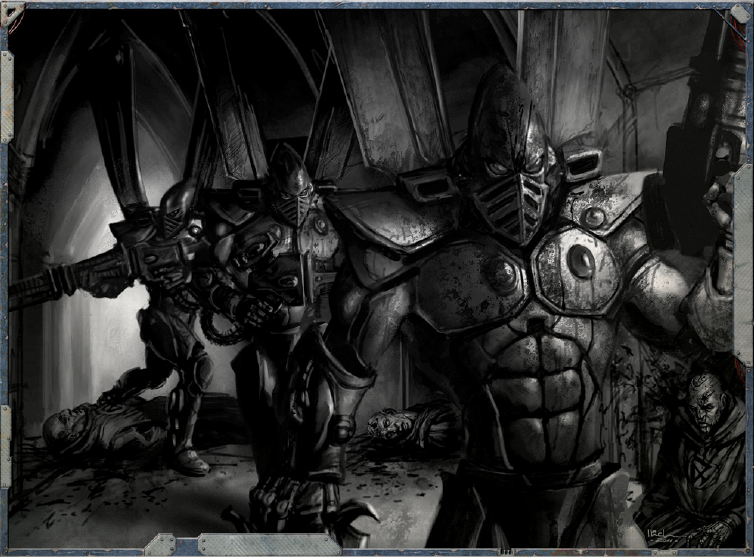 These guys don’t care about you, your friends, or even themselves for that matter…

While being the vanguard veterans of Eldar space pirates, Malevolents still fight like regular Guardians… but with Furious Charge and Rage, that’s 4x S4 Initiative 5 punches each! If you can get off an assault against weaker targets, the sheer quantity of middling attacks will do some serious work. The ideal targets are ones you wouldn’t want to waste scatbike or warp hunter shots on, like cultists, horrors, gretchin, maybe even space marine scouts, whatever weak scoring units there are. Recently at a tournament, 10 Malevolents with Void Dreamer were able to take out 30 horrors in 3 turns to clear and hold the enemy backfield, thanks to juiced up Rage charges and some support fire fom a Phoenix bomber. Last turn, the Void Dreamer detaches from the unit, and as an IC is able to score the objective. Win!

One question that comes up here is the fact that Malevolents come stock with Rage, but if you have a Rage Prince with Reaper of the Outer Dark and elect to give the Malevolents Rage for free again, no they would not get double-Rage, but it seems that they would still be affected by the ‘must assault enemy units in 8″’ rule. Assuming this is true, the Malevolents are great units for setting up the Rum Slingshot, and even better when daisy-chaining in a Prince as well, but really they don’t even need it to get their main jobs done, it’s just something to watch out for. Lions of Asuryan Corsairs by Cavalier

At the end of the day, for 280-ish points you can take 10 Malevolents with melta bombs and a Void Dreamer, or for a few points more an Aspect Host of 3x 5 Warp Spiders. 9 times out of 10 you’ll see the Warp Spiders, but 10 times out of 9 I have found the Malevolents to be more fun, surprisingly effective, and freakin’ hilarious to put on the tabletop. Kitbash some freaky psycho pirates out of Wyhes, Scourges, and Harlequins, make them also work as counts-as Corsair Warp Spiders if you have to, you will definitely enjoy running circles around Eldar Jetbikes with these cursed sadists.

That’s all from Ibushi this week, back next time to look at some more Corsair shenanigans and why you should indeed be scared of the Void.

Tranton stepped into the attack and grabbed the fiend by the throat, snapping its neck as it frantically scrabbled at his armour. Before he could let go, three more Eldritch fiends were upon him, scratching and poking, nipping at his heels with shuriken pistols, too fast to catch and too crazed to notice their many wounds.

In this surreal combat, Tranton was seeing all the more clearly why the Imperium must be purged of all xenous filth.

The deck suddenly began to vibrate violently, throbbing and pulsating with alien rhythm, throwing the Astartes off balance. In that briefest pause, flashes and cascades of purple smoke billowed forth once more, and the frenetic assailants were gone as fast as they had arrived.

++
And as always, Frontline Gaming sells Games Workshop product at up to 25% off of retail, every day!

3 Responses to “Cursed of the Void: Eldar Corsair Shenanigans II”