Hey guys, it’s Adam from TheDiceAbide and RUMBL. Just the other day, I received a rather large box on my door step, and I knew immediately what it was… HEAVY GEAR!

I’m not surprised that some of you may not know what that is, and others may only know it for it’s successful Kickstarter campaign that I was excited about a couple years ago. For those that don’t know, Heavy Gear is a miniatures game with a rich, well developed background, set a few thousand years in the future, on the planet Terra Nova, which is caught in war between the North and the Southern hemispheres.

A Brief History of Heavy Gear The first edition of their miniatures game launched as a 1:87 scale tactical wargame, back in 1995. It was short lived, partially due to the original miniatures being cast in lead. The switch over to lead-free metals was costly, so the game was redesigned in 1:144 scale in 1997, right around the time I first heard of the game. The approach that Dreampod 9 took to designing the Gears was hugely interesting to me. Instead of making the biggest, most bad ass robots in the universe, like some Battletech, Heavy Gear took the approach of making believable suits of combat armor. Each guidebook had fully detailed descriptions of the mechanics behind each gear, none relying on mystical devices like machine spirits to operate, which helped make the genre very believable. The gameplay however, was incredibly complex, though thankfully required only a handful of models to play.

In 2001, we saw the rise of 3d cartoons, most notably ReBoot, though Heavy Gear had it’s own cartoon! Take that! What other miniatures game had a show based on it, and not the other way around?! There were also very successful video games launched in 1997 and 1999, a full 5 years before GW would hit the video game scene with any meaningful impact. In 2006, Heavy Gear got it’s reboot with the first version of Blitz, and around the same time got to resculpting the vast majority of the models in the line, improving their quality, making them easier to recognize on the table, and upscaling the gears a tad, which gave more room for some nice details.

The latest chapter in the life of Heavy Gear is just beginning. The Kickstarter has shipped, and now they have 4 armies that have a majority of their models available in delightful plastic. The first thing I noticed when opening the box was just how much stuff I was getting my hands on. Each model comes neatly on it’s own sprue, with a multitude of weapon options for the different load-outs. Each one is cast in a darker, very slightly softer plastic than I’m used to, but are incredibly well detailed for their scale. The first thing I did after opening the box, was getting to assembling a few of my add-on miniatures. They assembled quite easily, though the Ferret and Cheetah (the smallest gears in the game) were a bit fiddly to deal with. My Testors Model Masters plastic glue didn’t seem to work too well, but super glue worked incredibly well, bonding very quickly and sturdy, without the use of accelerant. Here are the first three I made, a Crossbow Grizzly, Wild Ferret and White Cat Cheetah: After assembling these guys, I took some time to read over the rules a few times, and while at first glance they seem over-complicated, they actually aren’t bad. The rules remind me of how Infinity seemed incredibly complex, until I started playing the game, then it all fell into place. The core mechanics allow a lot of user agency in both players turn, meaning that during your opponents turn you have plenty to do. They’ve done some cool things like combine all the rolls required to shoot into a single roll, so no to-wound rolls, no armor saves, which speeds it up considerably.

The (Plastic) Forces of Terra Nova

The first four armies to get the plastic treatment are The North, The South, CEF, and Caprice. Each army has it’s own unique feel, and even though many of the smaller gears for the North and South seem very similar (as one side stole plans from the other), the larger gears and overall army composition differentiate them pretty significantly. The CEF and Caprice however are totally different, less reliant on your typical, biped gear, but instead goes to battle in a variety of striders (multi-legged walkers) and battle tanks! This is probably a good place to point out that tanks in this game are truly terrifying, in a long-range shoot out, they are bad news for any gears on the table. In Heavy Gear Blitz, gears are (mostly) not huge monstrosities of heavy armour and massive weapons, but are instead tactically flexible units that are between infantry and tanks, far more maneuverable and versatile than something like the MHT-95 of the CEF forces. 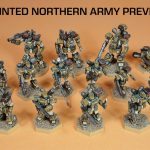 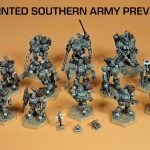 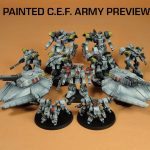 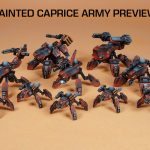 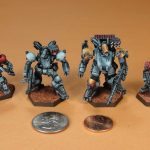 There are other factions in the game as well that will be featured in their next Kickstarter, I can’t wait.

How do I start?

Even if you missed the Kickstarter, it’s not too late to check out this awesome game, the starter sets for each army are available to preorder on their website and Frontline Gaming will be carrying them very soon! Better yet, find a friend who kickstarted the game and see if they would sell off one of their 4 armies that they got from the campaign. Like other miniatures games, you can download the rules for free, which is something I really appreciate.

It’s very hard for me to not be a huge fan of this game, I’ve been a fan of the Heavy Gear universe for nearly as long as I’ve been playing Warhammer 40k, and it has always been well represented in various formats. Now that the Kickstarter has landed with high quality miniatures and a very solid set of rules, I suspect that we’ll see the game pop up more and more (I know for one that Reece is also a huge fan of Heavy Gear).

Dreampod 9 was one of our first partners over at RUMBL, if you’re interested in playing the game, you can add them to your RUMBL profile, or register a new account.

For those of you who don’t know, RUMBL is an app that I have developed with a couple friends that is making a bit of headway. It is a platform to help you find new people in your area to play miniatures games with, as well as a way to keep track of your gaming record. We are in early beta at the moment, but have already secured partnerships with several publishers, including Warlord Games, Mantic, and Dreampod 9. There are exciting developments coming up for the app, but for now, sign up and climb that leaderboard early!

One Response to “Heavy Gear is HERE!”