Start Collecting Age of Sigmar on a Budget! 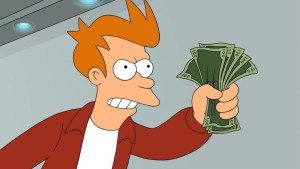 Hey guys, it’s Adam from TheDiceAbide and RUMBL. Unless you’ve been living under a rock, you’re probably aware that the General’s Handbook is now out for Age of Sigmar.

This awesome (and inexpensive) book brings us 3 different ways to enjoy Age of Sigmar, including the heavily anticipated Matched Play, which I’ll be talking a bit about here, but mostly today, I want to share with you some ideas for getting an Age of Sigmar army, without breaking the bank.

Those of us who are veterans of Warhammer Fantasy are well aware with the start up cost of an army towards the end of 8th Edition. Often times you needed 2-3 battleforces, 3-4 boxes of some elite infantry to make a proper horde with, plus monsters, artillery, and characters… by the end of it, it wasn’t uncommon for a typical 2500 point army to run well over $600… Something which is hugely, and rightfully intimidating for anyone getting into the game, if not a totally massive barrier to entry.

Games Workshop seems to be aware of the huge cost of entry that made player growth at the end of Warhammer Fantasy nearly nonexistent, and has responded appropriately by bringing on starter sets with a sizeable savings. I’ve put together a couple examples I came up with, when trying to decide which army I should add to my collection next. I’m pretty torn between Ironjawz, which could ally with my Ogors for a combined Destruction army, or doing Sylvaneth, which are the newest hotness with that sexy Alarielle model which looks epic to paint. 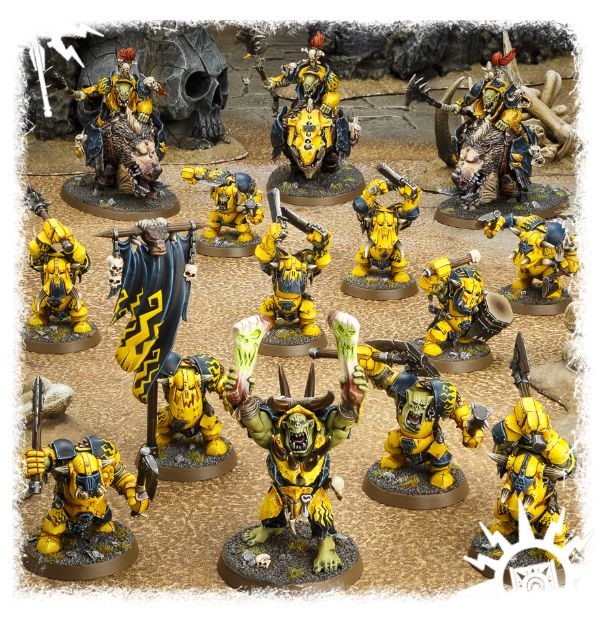 Under $400 for a devastating 2k army, you end up running a unit of 30 Ardboyz, 3 units of Gore-Gruntas in a Gorefist (which gives them an extra 15″ move on turn 1), a Warchanter (with two to spare), and the amazing Gordrakk, The Fist of Gork. You can mix around the list by downgrading Gordrakk to a regular Megaboss on Maw-Krusha to get a couple more Warchanters to buff your units with, plus you need heros to claim objectives in some scenarios. Further expansion might see another box or two of Ardboyz, a Weirdnob Shaman, and possibly a second Mawcrusha if that tickles your fancy.

Note: For $15 more, you can skip the third Start Collecting! box and get yourself two boxes of Brutes, which are just amazing miniatures. Swap the Gorefist to an Ironfist, toss in a second Warchanter (which you’ll have lying around) and you’ve still got a rock solid 2k list. 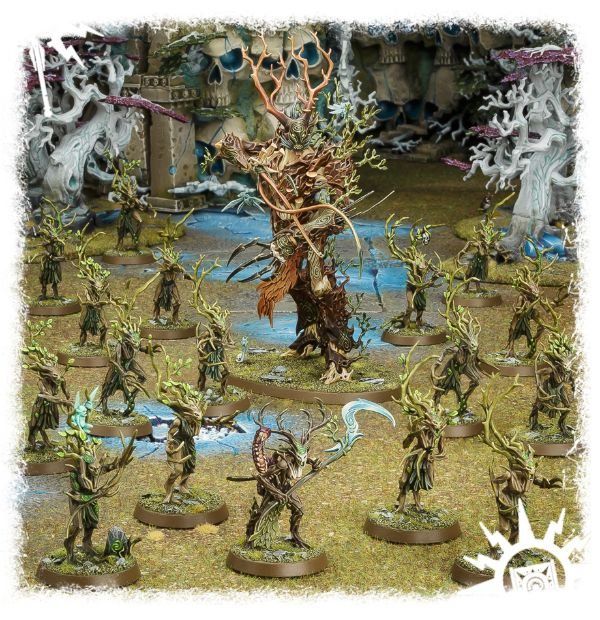 The newest kid on the block, the Sylvaneth are bound to be a popular army among tournament players, no small part due to being easy to paint, and looking incredible if given a bit of extra attention. By converting the second Branchwych to a Branchwraith, this army could run as a Gnarlroot Wargrove (bonuses to casting), with an additional Household Battalion, and Drycha, for an army with a good amount of monsters, swift melee units, and effective casting… Damn they look rad. 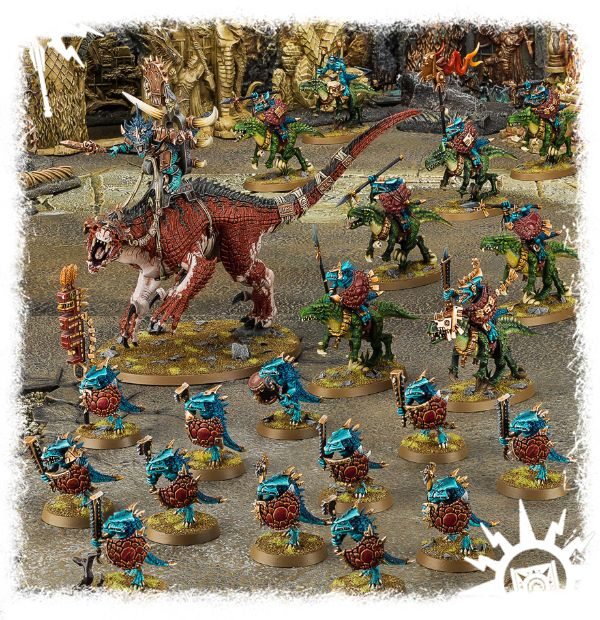 Nearly any army where you can double up on a starter set will actually be fairly inexpensive to start with. Splitting an Age of Sigmar starter set, plus the Start Collecting boxes for either Khorne Bloodbound or Stormcast Eternals is going to be a great start, and nearly a 1k list for either of those armies for not much at all, I’m not sure about doubling up on the Stormcast box, but the Khorne box is a huge budget with the Blood Warriors and Skullcrushers being worth $112 on their own.

One of the boxes in particular that I’ve found to be amazing deals is the Seraphon box, where you get a Carnosaur, 12 Saurus and 8 Saurus Knights for only the price the Carnosaur… Doubling up on that to make the Saurus Lord on Carnosaur, a Troglodon, 2×10 Saurus and 3×5 Saurus Knights, about 1080 points worth for $170 retail, or $127.50 with the pre-order special from Frontline. The Ironjawz box is also only $6 more than the Gore-gruntas alone, and the Skeleton Horde is only $5 more than the Mortarch. Some of these boxes are just amazing, deals that GW hasn’t been doing in a very long time, hopefully we’ll see more in the future!

It wouldn’t be a guest post without a shameless plug! Now that Age of Sigmar seems to be ramping up (literally 11 players that we’ve never seen showed up at my tiny, back-water FLGS showed up for AOS), it’s the perfect time to hop on RUMBL and prove who is the best in the 9 realms!

Great article, Adam! I was blown away when I realized how cheap it was to get into AoS, now.

Yeah, one more I just figured out is if get these two boxes, you’re almost at 2000 for Flesh-Eater Courts:

Exactly. So affordable, especially with our discount.

Do you guys know if you can sill order the Ghoulish Host? It says “Temporarily Out of Stock” but I’m not sure how much I trust that.

Hmm, email the sales team at: Orders@FrontlineGaming.org and they will let you know if we can get it.

STOP TEMPTING ME WITH FLESHEATER COURTS!!

AoS and the General’s Handbook has rocketed this to my favorite thing to play.

It is very dang fun.

I think a box or two of Brutes and a Megaboss is the way to go to add to 2 or 3 Start Collecting: Ironjawz boxes.

With the Warchanter and Megaboss buff to Brutes, they’ll just wipe out units. Don’t forget to choose Ravager for a trait and take the Ironfist formation. Rolling 2d6 +2 extra movement in the Hero phase is a much needed buff to a Movement 4 army. This can grant you a first turn charge to crush units in your opponents army before they can be buffed or made immune to battleshock. If you take Gorefist as well, don’t forget to give them the +1 to hit from Warchanters!

Yeah, I originally had 2 units of Brutes instead of the third starter, but I wanted to be able to run the Gorefist Battalion (3 units of Gore-gruntas) to move up them up an extra 15″… That said, I’ve also ordered the Brutes from my local shop (still gotta support the guys who give me gaming space), and since all the battleline units of the Ironjawz are the same points, it’s really easy to mix and match…

And you should totally do Flesheater Courts, both of those boxes I mentioned come to just under $200 with the preorder bonus from FLG, hahaha. I gotta get on the payroll, you hear me Reece?!

The ogre beastclaw assault army box is 1580 points for $215. That’s a pretty good deal too.

Yeah, it sure is! Plus the models are bad ass.

haha – yeah as the wallet cries!