Guest writer Dustin Knerr reviews the meat and potatoes of the Age of Sigmar Sylvaneth faction!

The Sylvaneth have amazingly detailed models and are one of the most synergistic factions in the game right now.  The faction already had some really cool Warscrolls and with the new releases that just came out they should be considered one of the strongest factions in the game.  Here is part 1 of the Sylvaneth review which consists of the Warscrolls available before the recent release. 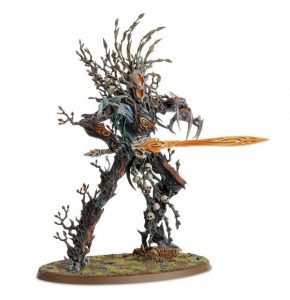 First up is Big Papa Durthu, the Elder of Athel Loren!  With such a cool title comes wisdom right?  Well he was once wise and what not, but after centuries of fighting he’s basically gone mad.  What is more frightening than a giant insane tree with a sword?  Not a whole lot.  Durthu has three weapons, one ranged and two melee.  His ranged attack is a high attack count, low damage weapon with a 10” range and isn’t much to write about, just some basic dakka.  The shared attack that all of the Treelords possess, Massive Impaling Talons, gives you a chance to instantly slay an opponent.  After wounding, roll a D6-1, if you match or beat the remaining wounds on the model, then it is slain.  The last weapon that Durthu possesses is incredibly good.  His Elder Wrath Sword hits and wounds on a 3+ with -2 rend.  The damage on Big Papa’s Super-Big-Ass-Sword ranges from 6 to D6, then to D3.  For most of the match he will be doing D6 wounds with this puppy.  This weapon will consistently hit and wound and packs one hell of a punch.

Also shared with his other Treelord compadres are the Groundshaking Stomp and Spirit Paths special abilities.  Groundshaking Stomp, used at the start of the combat phase, gives him a chance to make the nearby enemies subtract one from their hit rolls in that combat phase.  That’s a pretty good way to make sure the Treelords don’t get eaten by mobs of zombies and other massive units like it.   Spirit Paths allow the Treelords to move between Sylvaneth Wyldwoods.  This is amazing to move the Treelords quickly about the battlefield and get into the backlines of an enemy to grab their backfield objectives.  Durthu’s final ability is his command ability, Tree Singing.  This allows him to summon a Wyldwood within 30” of himself.  With Durthu as your General you can consistently transport your Treelords to the backlines.  Just keep your Treelords near a Wyldwood and they’ll do quite well. 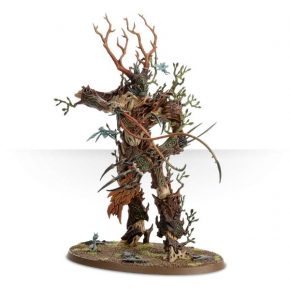 The remaining two Treelords are very similar.  They share the same melee attacks and abilities.  The only differences are in their ranged weapons and the Treelord Ancient is a Wizard.    The Treelord’s ranged weapon has a 12” range with 5 attacks and 1 damage each, while the Treelord Ancient has an 18” range with 1 attack and D6 damage to it.  The Treelord will be a bit more reliable but the Ancient also has the ability to cast spells and a higher bravery.  The Treelord Ancient can cast one spell and unbind one spell.  He knows the two basic spells and his own spell “Awakening the Wood.”  Yes, you guessed correctly, more synergy with Wyldwoods, there is a theme here.  The spell has a casting value of 6 and makes a Wyldwood come alive and attack enemy units within or near them. 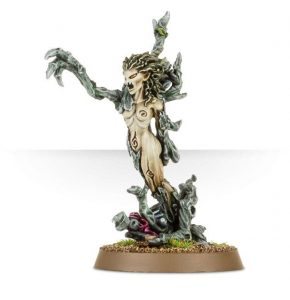 The first of the non-Treelord models are the Branchwraiths.  They are priestesses of Sylvaneth and are basically the ones who wake the Dryads from their slumber for battle.  The Branchwraith is a fairly squishy model with only a 5+ save, but they do have 5 wounds so that helps a bit.  They only have one melee weapon however you don’t want them in melee.  They are there for support casting and summoning Dryads.  The Branchwraiths are a bit tougher to hit in or near a Wyldwood. Similar to the Dryads, Branchwraiths possess the Blessings of the Forest ability. This forces enemies to subtract one from all hit rolls made against them while they are within 3” of a Wyldwood.  The Branchwraith is also a Wizard that can cast and unbind one spell each turn, casting either the basic two spells or her special “Roused to Wrath” spell that summons 2D6 Dryads in a Wyldwood with a casting value of 7. 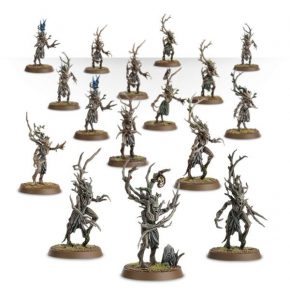 The last models to be covered are the tree homies, aka the Dryads.  The Dryads are the mob units for the Sylvaneth.  They are relatively squishy, but get some nice bonuses when they are in Wyldwoods and are great at bogging down units.  They only have one melee weapon that does decent damage for their mob style, but they have a move of 7” which really helps them get into combat.  Their main abilities are the Blessings of the Forest, Enrapturing Song, and Impenetrable Thicket.  The Enrapturing Song helps them attack by giving the unit a +1 to the hit rolls for attacks against a nominated enemy unit within 3” during the combat phase.  While the unit has 12 or more models, it gets the Impenetrable Thicket ability which adds 1 to the save rolls for the unit. 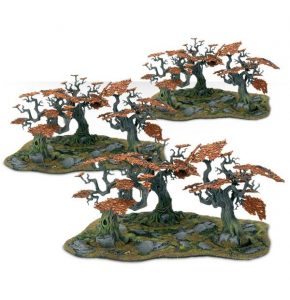 Lastly the Sylvaneth Wyldwood deserves a mention.  Even though it is technically terrain, it’s basically an extension of the Sylvaneth army.  Mainly the Wyldwoods don’t like people running, charging, or casting spells in them.  If a unit runs, charges through, or finishes movement on a Wyldwood they roll a D6 and on a 1 they are slain.  That does not apply to Sylvaneth, Monster, or Hero models however.  If a spell is cast within 6” of the Wyldwood another D6 is thrown and on a 5+ the woods attack all units within 1” dealing D3 mortal wounds.  Of course the Sylvaneth are not harmed by these attacks.  There are tons of reasons for enemies to avoid the Wyldwoods, use that to your advantage during deployment.

So there you have it! Let us know in the comment section if you’ve been using any of these Warscrolls in your Age of Sigmar games.  Thoughts?

I just picked up the box set with 32 dreads, a branchwraith, and the three tree lords! I can’t wait to crack into it!

Awesome! Make sure to make that Durthu! After writing this I took him against some Serephon and he almost one shot a Bastillidon. 2 wounds at 6 damage a pop is insane! I combined him with some healer battle mages and he was unstoppable.

Yeah, he is SOOO good. Man of the match in every game for me, so far.

Those models alone make me want to try out the army. And who does not like big tree’s with swords….. Nice article.

Thanks! I love running the tree host. They are quite intimidating on the table as well.

Nice review! I love my Sylvaneth army, Durthu is stupid good and I tried Dryads last night, they’re much better than their stats would indicate.

I love the Dryads as interceptors. I normally just use them as throw aways to hold an enemy for Durthu or another tree homie to come in and smash. If the Dryads do damage, great, but it’s not required haha.

I wonder how summoning will work for them since they summon random #of models. Normally I summon a forest with durthu, summon dryads in it, then forestport durthu behind their line, then engage on the next turn.

Thanks for the summary, I am tying to teach my wife to play her sylvanath army. I hope part 2 will be utilizing the new units coming Saturday?

Yeah, more articles to come covering the new Sylvaneth! I am also eagerly awaiting my own to arrive so I can assemble those bad boys!

Yes! More to come! As a bit of a teaser I personally think Alleriel (obviously) and Kurnoth Hunters with Greatbows will have the biggest impact on the game. Those Greatbows provide a LOT of long ranged power that we just didn’t have before.

Yeah, and they look so COOL!

That alarielle model got me into the game, lol.

I love the stump bugs that act as quivers that come with the archers.

While the great bows do add huge ranged shooting I think that I will go with swords to match durthu as my warlord. I want to take advantage of that cc mortal wound ability that they have. Plus I like the 3+ hit and wound with rend and 2 SMG from 4 attacks. As long as the summoned dryads and forestported durthu can lock up the combat the hunters will make it in.

Yeah, the rules on these new Sylvaneth models are bonkers! They better cost a lot of points, lol

I’m very happy to see more people writing articles on the different factions! Especially those that are playing with them. Looking forward to part 2!

Be aware that some of these Warscrolls got significantly changed with the new release. Durthu now has more of a protector role while his tree summoning ability got shifted over to the treelord ancient etc…

My favorite change happened to the wyldwoods which are now allowed to be just one single base of citadel wood. That’s great because the Sylvaneth are getting tons of possibilities to create new trees during a game and you may want to be able to create multiple small wyldwoods instead of a few giant ones.