The formation that singlehandedly makes everyone thing that Tau are WTF OP OMG BORKEN, starring everyone’s favorite Monstrous Creature to hate, the Riptide Wing! Click to read on, or check out the Tactics Corner for more strategy and reviews. 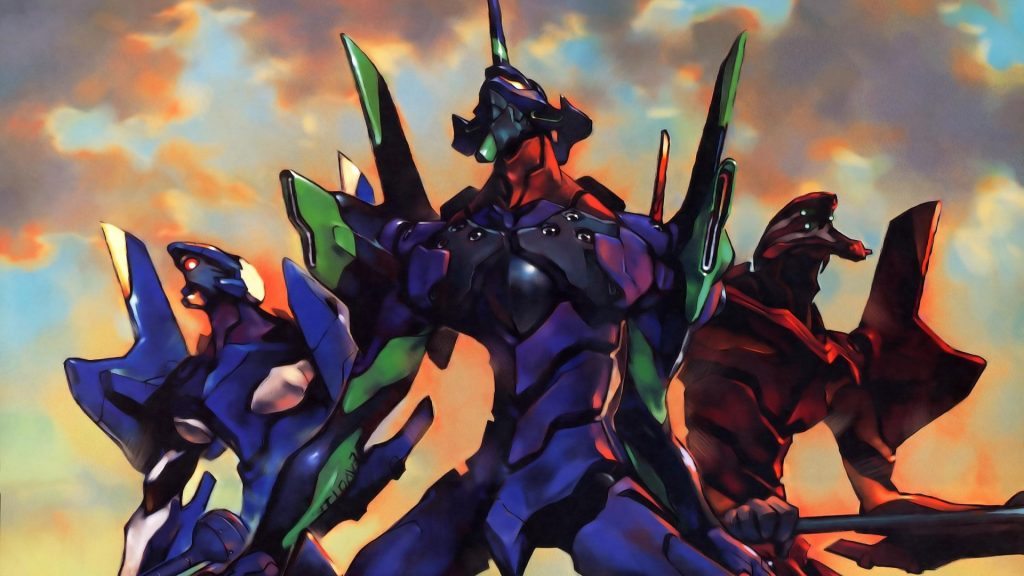 The Riptide Wing is relatively simple- it’s three units of Riptides, configured however you please. If you want to go really hog-wild, you can even max out the unit size of all three of them for a grand total of nine big honkin’ suits and eighteen drones- great for re-enacting your End of Evangelion narratives, but probably not a great choice for an actual tournament army. As it is not a part of either the Hunter Cadre or Dawn Blade Cadre, a Riptide Wing must always be taken as an independent detachment and won’t benefit from other “meta-formation” benefits. 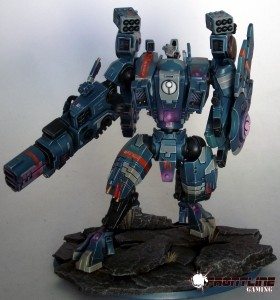 Aside from a very solid core composition, the Riptide Wing has three benefits, all of which are fairly significant. First of all, any Riptide within 6″ of another model from the formation can reroll its  Nova Reactor attempts, which makes them a lot more reliable. Nova Reactors are normally a rather fickle thing, so being able to retest them brings them up to nearly a 90% success rate and means that you can reliably keep up the benefits on most/all members of the units pretty much every turn with minimal chance of attrition. Note that it is any other Riptide in the formation, even one from the same unit if you happened to take them in squadrons.

Second, you get +1BS when shooting at a target that at least one Riptide has fired at that shooting phase. While this won’t be huge for an Iontide (unless you’re blowing enough Markerlights to get it to BS6 for the reroll on Gets Hot), like the Nova benefit it is huge for a Heavy Burst Cannon variant and in combination with the above it makes this setup quite viable for them. Note again that this benefit only applies during the shooting phase and thus won’t help any during Interceptor attacks. It also won’t apply to attacks that are Snap Shots, due to the order of operations in modifying a value. 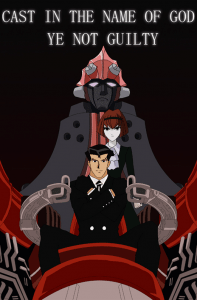 Third, and perhaps most famously, is the Riptide Hailfire attack. Once per game you can declare the attack and any Riptides that stand still during the movement phase (and assault phase) may make two full shooting attacks back-to-back, including double-doubling up with a secondary weapon if you successfully activated Ripple Fire mode. These attacks can even be at different targets if you choose, which can be useful for racking up that +1BS bonus from above.

The question of exactly how to equip the Riptides is an interesting one, as the formation benefits can push you in several different directions. The ability to consistently Nova Charge and make multiple attacks as well as getting bonus Ballistic Skill are all very nice for a Heavy Burst Cannon version; on the other hand, an Ion Accelerator variant is less likely to be hampered by the inability to move during a Hailfire attack turn. All three secondary weapons have their proponents and none of them is a bad profile; I myself prefer Smart Missiles for their versatility in a variety of situations and especially their ability to reach more-distant targets and those out of Line of Sight. However, getting to put two or four Fusion shots into a vehicle will all but guarantee its elimination and the Plasma Rifle can likewise put out a fairly absurd number of shots at point-blank ranges (not to mention both of their APs matching the target priority of the Ion better.)

Taking Early Warning Overrides on all suits in the units is essentially mandatory- 5pts for Interceptor is simply too good a deal to ever pass up and it shores up too many weaknesses to refuse. A second support system isn’t mandatory, although it can be useful- Advanced Targeting System is helpful occasionally and quite cheap, making it a favorite of mine. Target Lock is a requirement if running the Riptides in units of more than one- it allows you to distribute firepower more effectively and can net you two targets for +1BS against on successive attacks. Many players swear by Stimulant Injectors (for Feel No Pain), but I often find myself unimpressed by them- certainly, they can make a suit extremely difficult to remove, but compared to buying a Void Shield Generator or adding additional models to the unit the numbers don’t work out all that well. However, if you have a handful of points left over and nothing better to spend them on, go ahead. 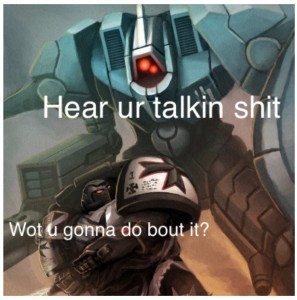 The Riptide Wing is all about what Tau do best- apply firepower. The the base shooting output of a Riptide itself is merely comparable to a Leman Russ or other heavy tank, it does so while remaining mobile, reasonably resistant to melee interference, and most importantly protected against enemy counterfire. So while a Riptide Wing does little to enhance the other aspects, all three aspects of it work to push the firepower of its suits through the roof.

Networked Reactors mean that you will more often be able to use your Nova Charge profile or Ripple Fire with the suits, which means more shots and more damage. Bonuses to your Ballistic Skill mean that those shots will land more often. And the Hailfire attack, even if it is once per game, allows you to use your improved profile more often and hit more targets with your units (and thus apply the BS bonus more reliably.) All three bonuses play into the other two from the formation, which is what really makes it so powerful.

The question of when to unleash the Hailfire attack is certainly a relevant one for anyone running the formation; typically speaking, one wants to use it as early as possible, but the counterpoint to that is that it prevents you from moving that turn and thus can often compromise your shooting by putting some of your guns out of range. This typically means that, bar poor deployment on the enemy’s part of an unusual setup, you won’t generally be able to make full use of it on the first turn of the game like you might prefer to- often enough, you need to wait for the enemy to close in on you before activating your Hailfire. Remember also that using Interceptor may prevent some or all of your Riptides from participating in a Hailfire attack, another very relevant concern if the enemy is bringing down Drop Pods or the like. 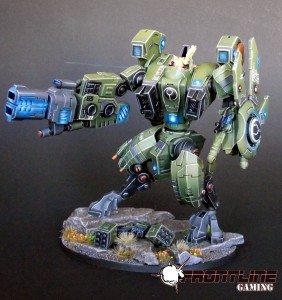 However, even with all of that going for it, the Riptide Wing has one major limitation on it, and it’s the same one that all Riptides have- they are almost universally very Markerlight-hungry. With only BS3 natively and Gets Hot on most of their preferred weapon profiles, Riptides need to be seeing some bonuses to their accuracy or else they are likely to waste many or most of their shots; similarly, while an AP2 pie plate is hardly bad shooting, without Ignores Cover it is a much less frightening prospect and is merely in the realm of the everyday Battle Cannons that have never really shook up the game. So it is that a typical Iontide wants to be using up five Markerlights per turn (three for +3BS to avoid Gets Hot and mitigate scatter, two for Scour) and even a Bursttide wants to be seeing at least two most of the time. This means that a full Riptide Wing can easily consume twelve or fifteen Markerlights every turn of the game across three different targets- a rate that is all but unsustainable for the overwhelming majority of lists.

As a result, most Riptides will end up firing at significantly-reduced effectiveness from this level and will periodically be whiffing completely, suffering wounds from their own guns, etc, especially if the enemy has been able to degrade a list’s Markerlights (or if the list had few/none to start with.) This is typically the biggest limitation on the formation- without significant support, it will be a trio of very tough shooting platforms, but not terribly accurate ones and thus won’t be a particularly attractive way to spend ~600pts for a lot of armies.

However, with that said the ability to mix a significant amount of Interceptor into any army is nothing to be sneezed at. Many armies- such as Eldar- are very vulnerable to reserve-based strategies and the Riptide Wing can be a powerful solution to these problems as it can shoot down many problems before they even have a chance to affect the board. Though only Eldar and Necrons are Allies of Convenience with Tau, Imperial factions and Dark Eldar as well as Chaos Marines can also squeeze them in as Desperate Allies if they’re willing to accept fairly large sections of the board becoming very dangerous to move into due to the One Eye Open rule. There are other ways for such armies to access Interceptor attacks through Tau (including the Ranged Support Cadre and Firebase Support Cadre), but the Riptide Wing is perhaps one of the more attractive ones at the end of the day due to the durability of its units. 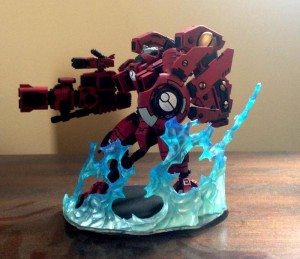 The Riptide Wing is definitely a strong formation, but also not one without weaknesses- it concentrates a lot of points into a relatively small number of units and is highly vulnerable to many of the typical weaknesses of Tau, such as Grav weapons and assaults. Without extensive support units to assist it (Markerlights, melee defense, additional scoring units, etc) it will struggle to hold proper control of the field, hence why many of the “big robots” lists for Tau  (such as double-Riptide Wing, Riptide Wing + Ghostkeel Wing, Riptide Wing + Stormsurges, etc) have failed to rank particularly highly at most tournaments. However, properly supported it can be a powerful tool and provide a good mix of elements to fill the gaps in a list while not skimping on firepower in the slightest- and for armies that can make use of these capabilities, it will be very dangerous.

Leave a Reply to wighti