Like Drones? Love automated servants? Don’t wanna do the dirty work yourself? Come on down to  Reliable Matthew’s Drone Emporium and pick up the hottest deals on used drones! Click to read on or check out the Tactics Corner for more reviews and strategies. 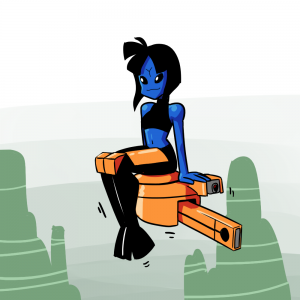 The core components of the Drone Net are pretty simple- you have to take four squads of Drones, of any size and composition. However, if you want to take more than the minimum you’re free to do so- unlike most formations the Drone Net is actually infinitely expansible, as it can add any number of squads which can be of anything from minimum to maximum size. As with any Drone unit, you are paying a slight premium compared to buying them as part of a unit of battlesuits and they will not be scoring units unless an Independent Character joins up with them.

The squads start as Gun Drones, but you can switch any or all of the members over to Marker or Shield Drones for no additional cost. All-Marker squads will typically be the configuration (even though they can’t take much advantage of some of the special rules) but having some Gun Drones isn’t an awful option. Shield Drones, despite their fluff, serve virtually no purpose in the units and should be avoided at all costs. 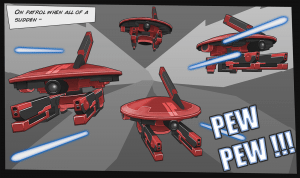 As with most formations, this is where the real meat is and the Drone Net is no different. The big advantage is in the Collective Targeting Data rule- so long as at least two units from the formation are on the table, all Drones in your army (whether part of the formation or part of another unit) gain +1 to their Ballistic Skill. This is pretty significant for Gun Drones, since it brings them up to a 75% hit rate thanks to twin-linked, but the Marker Drones are the real winner, since that makes them vastly more effective as Markerlight platforms.

Additionally, all of the Drones in the formation gain a whole slew of special rules- Interceptor is maybe the most relevant of them, but Jink, Split Fire, Outflank, and Precision Shots are all also included in the party. Unlike the +1BS these only apply to the formation itself, but as they are pretty excellent rules taken as a whole it’s hard to be too unhappy about that.

With the ITC changes, the Drone Net is amongst the strongest formations Tau have available because it brings something to the arsenal that no other unit can. Tau are a very nearly pure shooting army in most cases, and while against some other factions this sort of thing can be mitigated by using reserve strategies, Tau have widespread access to Interceptor to prevent this from happening. However, this often runs into a problem- their Markerlights are useless during Interceptor attacks, which gives up one of the strongest features of the Tau army and makes them much less able to inflict damage. Enter the Drone Net.

The Drone Net finally gives the army a solution to this dilemma, as it can field large numbers of Markerlights with Interceptor, allowing the army’s firepower to be applied at full effectiveness even during the enemy turn. This allows a Tau army to virtually guarantee shutting down anything arriving within 36″ of them, most especially threats like Meltagun-toting Drop Pod units that can be a threat to vehicles and buildings as well as the ever-obnoxious Grav weapons. This is especially critical for units like Riptides that have high value/high risk shots the army relies on- players might risk a BS3 blast weapon with Gets Hot, but few of them are willing to try and land in the face of a BS6 weapon that also ignores cover saves. 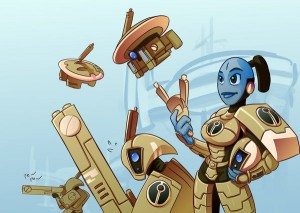 However, Interceptor is far from the only relevant special ability on the Drone Net; also highly useful is the ability to Jink, something that makes them a bit of an oddity. Now, it might not seem so at first- after all, don’t skimmers, bikes, FMCs, and plenty of other things already have the ability to Jink? They do, of course, but these units all share one unique quality- they cannot go to ground like Drones can. Yes, Drone squadrons are the only unit in the game that can both Jink and Go to Ground, which means they can gain a 3+ cover save anywhere on the field if you’re willing to forgo movement and overwatch in addition to your shooting. As they will often be pre-emptively using their Markerlights during the enemy movement phase, this hardly feels like a disadvantage at all and it makes the Network as a whole far more durable than one might expect it to be.

Drones also have another feature that improve their survivability compared to most other sources of Markerlights, namely their ability to make Thrust moves during the assault phase to stay out of the enemy’s view. Although there are other ways to bring Markerlights that can do this (such as a Commander with Drone Controller or a Stealth Team Leader), the Drone Network is unusual because of its small unit size and distributed presence, allowing it to make itself less of a target. Intelligent opponents will usually eliminate a list’s Markerlight sources first, since they are such a powerful force multiplier, so any strategy that the Tau can use to preserve their effectiveness longer is a huge boon to the army and so-called “jump-shoot-jump” tactics go a long ways towards this; generally speaking, if the enemy can’t see you they can’t shoot or assault you. It’s not a perfect protection, but especially working in concert with multiple other strategies it can do a pretty good job of protecting them.

The +1 Ballistic Skill bonus is critical to maintaining the effectiveness of a Drone Network, and that requires keeping two squads from it alive. Even with all of the above tricks this can sometimes be difficult- and that’s where the final component comes in. Canny generals will sometimes leave part or all of a Drone Network in reserve as insurance against the enemy getting lucky and wiping other parts of it out; this isn’t universally the right choice, but the option to Outflank with them means that these “backup” squads can often find a good hiding place apart from the rest of your army, which can sometimes be a layer of protection all its own when the whole of the enemy force is barreling down on you. 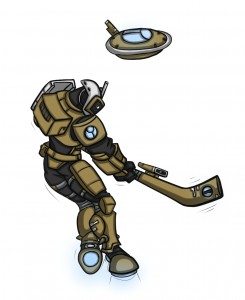 The Drone Network is a powerful addition to the Tau armory and is likely to feature in quite a few of their more successful lists in the future, I think. While it does essentially nothing on its own most of the time, the ability to put Markerlight hits on multiple units in multiple phases is an incredibly effective tool that functions like no other around.

Remember, if you’re looking to start an army or expand an existing one, Frontline Gaming offers up to 25% Off  on orders for Games Workshop product.

Having played this in one GT I wholeheartedly agree, although the drone net VX1-0 does little by itself it greatly improves a Tau army.

The gun drones are surprisingly good – yes they are expensive for their statline and being non-scoring but they get a whole stack of really good special rules.

Twin-linked precision shots can put the bullets where you want them more often than you might think. Combine this with interceptor fire and pick out grav weapons from those annoying Skyhammers. Actually just having S5 AP5 massed interceptor is great as it frees up your bigger more expensive guns for targets that need them. You could mix in split fire to try maximize pinning tests on units, in theory it should work even though it never has for me.

I would really recommend people try one or two gun drone units in addition to the obvious marker drones for a few games.

For those not familiar with the Tau codex the biggest deal with the army-wide +1BS are Missile Drones. These drones cannot be improved by a Drone Controller so were always stuck at BS2, a +1 to them really increases their damage output. With this they are the most points efficient way to deliver S7 shooting in the codex, although with the downside that they might force morale checks on Broadside teams when they get shot because they are relatively squishy.

When it came down to marker sources for my army, it came down to Skyrays or this formation. Bit of a tau tank fan, so wasn’t much of a choice! But I can totally see why people might swing towards the drone net, especially with access to skyrays limited mostly to the CAD and the prevalence of reserve armies.

I do really love Sky Rays and they make great anti-air, but the drones are amazing for other jobs. I have an article on the Rays coming up, tho.

As much as anything, I just love the imagery of them Jinking and Going to Ground at the same time, like Roombas on meth.

Just the drones sitting perfectly in one place but slowly becoming more and more fuzzy as they vibrate infinitely faster.

I picture it as them being hovering one moment then suddenly pancaked to the ground.

In the list I’ve been working on, I have 4 squads of 5 marker drones. Is this a good setup? Or am I wasting the 56 points on the 5th members of each squad. Note: these are currently the only source of markerlights in the list.

I don’t think it’s strictly a bad plan- adding the 5th body helps out with morale purposes and gives you slightly more ML support for a list that can use it. I can’t say with certainty if it’s the right decision or not without doing a more extensive review of the list, but there’s nothing wrong with the idea in principle.

You might also test it out as five squads of four instead, though- more flexibility and arguably more resilient against some sorts of things.

The list. I was actually going to run it as just 3 separate formations at first, but after finding out I could use both sets of signature systems in an Enclaves army I figured getting killing blow was worth 13 points of bonding knife tax.

for anyone trying to make a dawnblade formation this is a no brainer for it’s points, and it’s markerlight output… and with the other tau formation being worthless it’s a no brainer (also makes them super friends lists a little less solid)