The Best Formation You’re Not Playing: The Dark Eldar Grotesquerie

You are here: Home › 40K › Review › The Best Formation You’re Not Playing: The Dark Eldar Grotesquerie 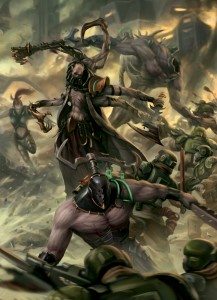 Zyekian here again to bring you a hidden gem you may have missed in the Dark Eldar army, more specifically the Haemonculis Coven supplement that followed it.  Say what you will about the core Dark Eldar codex, the Coven book is solid and I’m about to tell you why.  And as always check out Frontline Gaming’s Tactics Corner for more tips on getting the most out of your army. 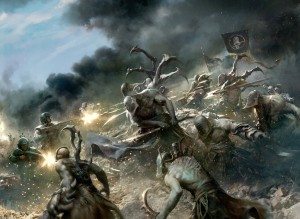 Let’s get to it.  The Coven book has chops.  It’s seriously underrated in the 40k community though, likely because it lies in the shadow of the Dark Eldar codex’s mediocrity.  It’s been my experience that most 40k players have little or no awareness of the supplement even existing, a phenomenon aided by Games Workshop no longer selling the paper book.  The book remains on sale in iBook format for anyone interested so go check it out.

What the book does is expand on Haemonculi and their nefarious creations.  It’s a book with grim, disturbing fluff and an array of flavorful rules, most of which can be tools in a competitive 40k list.  There’s a basic Coven Coterie detachment with its own force organization chart as well as a half dozen formations with some interesting benefits.  This is where we see the powerful Corpsethief Claw formation.

The Coven book replaces the Dark Eldar Power From Pain table with its own version customized to the needs of the brutal but slow-witted creations, most notably fearless beginning turn two.  LD3 units never looked so brave.

Lastly every Coven unit comes with a special rule called Freakish Spectacle: Enemy units withing 12″ of one or more models from this detachment suffer a -1 penalty to their Leadership value.  This rule stacks by detachment, meaning it’s possible to overlap these bubbles for some rather imposing leadership debuffs.  This is key in some lists and I’ll tell you why in a moment. 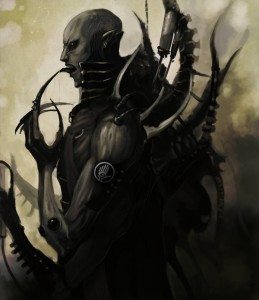 Let’s take a look at what a 35-point Grotesque looks like.  And brace yourself for a tsunami of special rules.

The Abberation can pick up a weapon from the Dark Eldar weapons of torture list though and this is where it gets interesting.  The most attractive options are the Scissorhand (poisoned rending CCW, threatens vehicles), and the Agonizer (poisoned AP3 CCW).  Remember that poison grants re-rolls to failed wounds when the wielder’s strength is greater than the target’s toughness.  An Abberation with up to nine AP3 attacks possibly re-rolling wounds, switching back to the flesh gauntlet as needed (which might also be re-rolling wounds) is a ferocious combatant.  Dark Eldar special weapons are powerful but often avoided because they often don’t last long on fragile HQs.  The Abberation has staying power like no other though so this is how you get your money’s worth.

As we can see Grotesques are big tough bags of meat that want to rip their opponents’ limbs off in close combat.  Especially when they have a cover save and a Cronos around they’re just not going anywhere.  Run them right into your opponents’ face, you want them to be shot at.  And with stacks of multi-wound models you can play wound allocation games to keep them upright even longer. 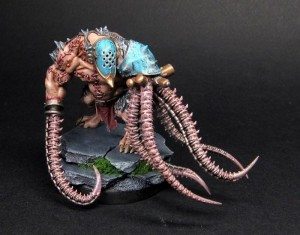 The Coven book uses the Dark Eldar allies chart.  Any Dark Eldar, Eldar, Harlequin, or Corsair list will gladly work with a Grotesquerie.

One of the greatest things about the Grotesquerie formation is its ease of use.  Barring any volume of S10 on the opponents’ side, charging this whole formation right up the middle of the board is often the best option.  Staying in terrain is key because their 6+ skin save isn’t likely to help.  Whenever a model takes a wound in the shooting phase, shuffle them the following round to keep the maximum number of models alive.  And don’t forget to roll IWND when it triggers mid-game to get some of those wounds back.

Grotesques can take Dark Eldar Raiders to zip across the map quickly possibly with a 3+ jink save.  Whether or not to use transports depends on the list, and while it’s the most reliable way to get a turn two charge it also brings a fragile unit into the list.  A pure Coven list has the opportunity to run exclusively high-durability units, making fragile Raiders into full-time bullet-catchers for smaller weapons that would otherwise have no attractive targets.  Plan on the Raiders being suicide skiffs and chortle happily if one survives turn two.

Once the Grotesques arrive they’ll force an opponents to focus focus on them.  This allow breathing room for objective-taking or getting other units into assault range.  And don’t be afraid to rampage into hordes and MCs alike, you’ve got the tools to take out a wide array of units.  Try charging them into Storm Surges and Wraithknights, pressuring them to make instant-death saves while the Haemonculis adds a flurry of rending attacks.

Aside from providing a safe and reliable spot to put a Haemonculis, the Grotesquerie provides a superb place for just about any space elf HQ.  This is where Succubi can be run truly effectively, piling on AP2 wounds where they’re really needed and combining her -2 Ld debuff from Armor of Misery with Freakish Spectace.  Eldar Spiritseers are a terrific addition because they can add shrouded for even more durability against shooting.  Phoenix Lords, Farseers, Eldrad, the Corsair Prince, and even lowly Yriel will work well in a pile of Grotesques.  The Abberation will also happily soak challenges when a fragile HQ would rather not risk the possibility of instant death. 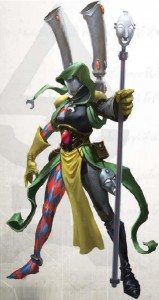 Speaking of death, an embedded Harlequin Shadowseer using the -2 Ld debuff from the Mask of Secrets can one-shot a unit of two Stormsurges using the Mirror of Minds psychic power.  And it’s not even hard to do.

The target model and the Shadowseer both roll a D6 and add their respective Leadership values to the result.  If the scores are drawn or the Shadowseer’s result is higher, the target suffers a single wound with no armor or cover saves allowed.  Repeat this process until either the target is slain or rolls a higher score than the Shadowseer.

With the Grotesquerie’s added -1 Ld from Freakish Spectacle, a Shadowseer with Mask will reduce a Stormsurge (or Wraithknight, etc) down to Leadership 6.  Mirror will keep wounding over and over until the thing is dead since the target has a mere 2.7% chance to break the spell each round.  In all likelihood the Seer will even drop a unit of two of them. If there are two or more coven detachments in the vicinity to stack Spectacle, the Shadowseer will end a Stormsurge just by looking at it. And that’s going to make you feel real good.

Despite their high durability and offensive output the Grotesquerie needs to avoid a few types of enemies.  Apart from matches where Latest Experiements bumps them up to higher toughness, S10 as well as other instant death attacks should be avoided.  Keeping inside cover is key.  Imperial Knights, force weapons, and hammer Wulfen require another answer from your list, so building in an alternate way to handle those units is important.  That being said, an Abberation with rending attacks is a threat to cut down a damaged Knight, as is an embedded Succubus with haywire grenades.  Pounce when the time is right.

The Grotesquerie is worth another look, folks.  New releases are shifting the meta again, making assault and counter-assault much more difficult to do without.  The flesh-crafted fit the bill and have real potential to bring some unexpected diversity to any army that can tolerate Dark Eldar allies.

So what are your experiences with this formation or Grotesques themselves?  Opinions on their place in the evolving meta?  Be sure to leave your thoughts in the comments section below!

29 Responses to “The Best Formation You’re Not Playing: The Dark Eldar Grotesquerie”