Signals from the Frontline #425 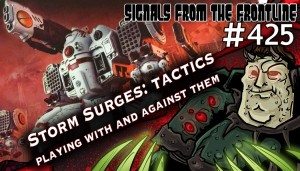 This episode, we’re breaking down the mighty Tau Stormsurge! How to play with it and against it! Join us for the live show at 11am, PST on our Twitch channel! 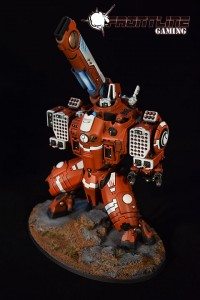 Click here for a quote on your used models!

Frontline Gaming buys and sells second hand 40k and Age of Sigmar models! Click the above button to get a quote on your unused models! Frontline Gaming will buy them and find them a new home through our second hand shop. No fuss, just one easy transaction and your old models are now cash!

Follow the links below to our second hand shop and grab yourself some second hand minis at a big savings over retail without having to bid on them! Plus, you’re buying from Frontline Gaming and know that we’re selling you exactly what we say we are.

Ange’s Fury “Not Just The” Spearhead…

Maybe the sauce of AFS isn’t trying some wonky drop assault? Good players will give you bad assaults to work with that leave you flapping in the breeze. Is it possible that the sauce is simply 3 dirty birds coming in turn 1, loaded to the gills with S8-9, AP1-2 weaponry and 30 obsec marines, then guiding in tons of Assault Marine melta shots and having tons o’ scoring?

Necron player here, ready to get those Renegade Knights and have a passable LoW option! Not sure how to kit one out, yet. Double guns seems the way to go, but gets expensive. Stock for Assault seems to be ok if you’re going shooting heavy Necrons (fits in nicely with a Destroyer Cult), but there are a lot of Assault options nowadays that can wreck it – Wraithknights, Superfriends star, etc.

Very excited to finally have a big stompy robot to go with my smaller, less stompy robots though! It was this or allying in Tau, and I’ll be damned if I become a dirty Tau player haha!

Ha, we didn’t even consider the options it opened up for allies, good point!

Since it’s the CSM allies matrix, it’s AoC with Necrons and Orks, making it a neat option for either. Both lack good Superheavies, or at least the ones they do have that are passable don’t quite measure up to IKs or WKs. While we can’t buff it with anything, having a Knight or 2 never hurts!

Yeah, great point! I seriously had not thought about that.

I would go with either single Avenger + Dsword (if your list wants some melee hitting power against stuff like Wraithknights and MCs) or Avenger + Avenger/Battle Cannon (depending on exactly which sort of guns your list actually needs.)

The Avenger Cannon is pretty dang good, basically. Wipes most squads in a single volley, even with benefit of cover.

The idea of sticking it into Tau or ‘Crons is actually pretty neat. Fuck you, Imps, we got our OWN robit now!

A little harder for Tau since they’re Desperate Allies, but easier than the CtA Imperial Knights!

Just a suggestion ( i love the tactics idea/format btw) but include a list that includes the unit you are discussing and a list that has the tools to deal with the unit of discussion. I think that’ll add another layer on to the discussion.

Not a bad idea. The only concern is going over on time, we struggle to keep it near the half hour mark, but we could certainly look at including it in the notes.

I don’t think anyone would complain about that!

while amazing, I don’t like trying to fill the close combat/midfield role with a unit that relies on rolling a 6 and can’t hold it’s own against another close combat monster.

I think they’ve been surprisingly successful in a meta that has swiftly moved away from D str shooting/ sword and board wraith knights and more and more skathach wraithknights who don’t pose a threat to the surges.

when not supported by markerlights a stormsurge doesn’t shoot much better than an ion tide and costs 200 more points.

I’ve wondered if there is a real argument to be made if taking 3 ion/sms tides over each storm surge isn’t a better way to go when looking at firepower. lets face it, SMS spam is all that is really needed from Tau.

I swapped my surge/markerlights out for a sword and board wraith knight, 2 scat bike squads, and a farseer.

with rolling invisibility roughly 50% of the time, I’ve found that the 295 point model will preform the midfield/assault role better than the near 900 point stormsurge unit while freeing up quite a few points at the same time.

and the added eldar jet bikes gives tau some movement/obj grabbing capability that they needed.

The true hero of the Tau has to be the Y’vahra. It just hasn’t gotten the attention it deserves.

Getting off work at midnight can occasionally spawn good ideas, resulting in my “Meta-Busting Mondays” suggestion, not CWW 😉

Is ignoresays cover really that bad? It sound like codex like nids, orks, and dark eldar need an update. Weak codex doing bad against ignores cover isn’t that surprising.

Try playing on the receiving end of it, Ed. It is so unfun to simply pick up your models with no recourse. I think if you tried it out on the other end, it would give you a new perspective.

Forgot to mention one of the biggest vulnerabilities of Stormsurges – Blind. With I2 it’s a real easy way to neuter a lot of their firepower!