Mathhammer : A Review of Resilience

You are here: Home › 40K › Editorial › Tactics › Mathhammer : A Review of Resilience

Mathhammer : A Review of Resilience 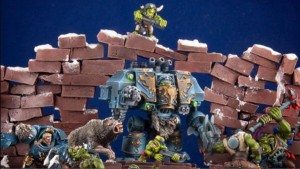 DeeJay here with a mathhammer article talking about damage mitigation, or unit resilience, in the game of 40k.    If you like this article, there are many other great, similar, articles in the Tactics Corner!

How good is a scattershield on a wraithknight?   How much better are terminators to tactical marines?   Just how effective is FNP?    All these questions are answered by learning how a unit’s resilience to damage works.

Damage and Resilience are opposites, like hot and cold.     In order to properly understand resilience, we need to review damage.

Damage dealt is the process of placing wounds onto a unit with the intention of causing a unit to change it’s current state through the process of removal of wounds or hull points.     The upper boundary of ‘damage dealt’ is the amount of damage an army can deliver over the course of the entire game.

This dealt damage is then mitigated by a unit’s resilience.    Resilience is defined in the game of 40k as “The capacity to reduce or ignore incoming damage”.     The amount of resilience a unit has determines the amount of damage that can be mitigated.

In contract to damage, resilience does have an upper limit — 100%.    When a unit has 100% damage reduction, the unit will not take any damage.   This can happen when shooting bolters at a wraithknight or land raider.

The unmitigated damage is then passed onto the unit, causing degraded performance of units, such as ‘weapon destroyed’, or could cause one or more models in the unit to be removed from play all together. 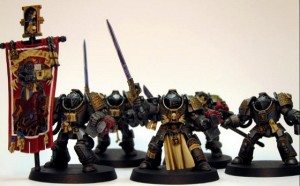 How does this affect my 40k game?

The same concept applies to your 40k game, not just MMO’s.

In the case of the IG vets, not having the carapace armor resulted in a 32% increase in damage, where the dogs had a 100% increase in damage!    This is because as you get closer to 100% damage resistance, the effect becomes greater.    This concept is what I call the “Rule of Resilience” — as a unit get’s a better damage mitigation, the greater the benefits they receive from increasing that mitigation by the same percentage.

This chart illustrates the difference in damage increase dealt to a target by reducing its save. 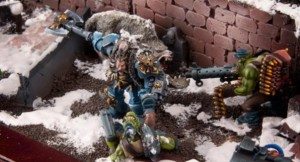 Another way to to visualize the effect described above is to talk about “Time to Live”   This is defined as the amount damage can be directed at a unit until it dies, given a state of average dice rolls.

I’m not saying it won’t happen in your lifetime. I am saying that odds like that are the reason the casinos are in business.

You should ignore extremes when estimating effects and plan your tactics on averages instead.

This chart should look very similar to the one earlier in the article describing damage taken vs armor saves.   That concept combined with ‘Time to Live’ illustrates how increasing armor saves can increase the unit’s time to live.

Increasing the armor save might be more than just bringing better units to the table.   It might be something as simple as going to ground in ruins.    Another concept is that night fighting helps units in ruins more than units on area terrain.

Altering the STR/Toughness of a unit can have dramatic changes on the “Time to Live” value. Even one pip change can have significant changes.

There are a few takeaways here. One of which is that a single pip of toughness increase on the model gives a 50% increase in “Time to Live” when taking attacks from a weapon whose strength matched the previous pip!

Notice how increasing the toughness to 6 with the Mark of Nurgle Bikes changed the “Time to Live” to 200% when compared the Centurions. The first pip change increased “Time to Live by 50% while the next increased by 100%. The nurgle bikes are nearly 300% as resilient as the TAC marines.

Look at the spawn. 15 wounds of T6 chaos spawn are as difficult to kill with MEQ bolters 5 Centurion Devastators – and half as difficult as the MoN bikers. This is due to the lack of armor save.    While toughness/strength comparisons make a big difference, the armor saves also play a role.

This is also why units such as Wraithknights are so powerful — it’s because their toughness is so high that many weapons cannot actually hurt them.     Increasing toughness or AV is also the only way in the game to reach 100% damage mitigation. 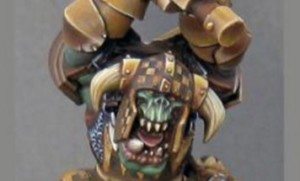 Resilience can be added in layers to generate a greater effect.    Take your standard wraithlord with it’s toughness of an 8.   When it’s shot at by a White Scars Marine’s melta-gun, the chances of taking a wound look like this.

What happens if that same weapon is shot at a wraithknight with dual D cannons?    The chances of the weapons hitting and wounding are identical, but in this case the wraithknight gets a 5+ FNP save.

What happens if the wraithknight has a 5++ save?

Again, we find that there is an increase of “Time to Live” by 50%.      It also means that the wraithlord will take 225% more damage than the wraithknight with a scattershield!

Another great example of this is the greater rewards of a 4+ FNP on daemons.    The same melta-gun shooting at a daemon prince will have the following profile.

If you get the 4+ FNP, the result will like this.

How Can I Layer Mitigation

There are four key ways to improve mitigation.  The first way is to reduce the chance of your model being hit.   This can be done through causing incoming weapons to take ‘snap shots’ to hit your unit, reduce their ballistic skill to 1 through tools like ‘Invisibility’, or to increase your weapon skill to reduce their chances of hitting.

Another way to layer mitigation is to improve the toughness of your unit(s).   This can be when building your army, by picking tougher units, or can be done in game through psychic powers such as ‘Iron Arm’.

Improving saving throws also have major effects on mitigation.    If your unit is hit by a weapon with an AP value that exceeds their armor save, then no armor save is allowed.    Severely reduces the mitigation of the unit, and if standing in ruins gives a 4+ cover save, then the unit receiving damage will have twice the time to live than the unit not in cover.    If the unit also has ‘Shrouding’ affecting them while they are in ruins, they will they will have 600% the “Time to Live” as the unit out in the open!

The final ‘layering’ effect is through FNP or Reanimation Protocols.   When this save is allowed, it is effectively another armor save, and even a small value of 5+ will have a big impact on the units overall “Time to Live”

Anything that allows you to ‘reroll’ the saving throw or FNP roll gives a nice advantage.    Daemon gifts, psychic powers (Precog, Fortune) or army special rules (Ravenwing, Tzeentch re-roll 1’s)  can all give this ability.    The rerolls have greater effects the better the normal save is.   In other words, rerolling a 5++ results in a successful save chance of 55%.   Rerolling a 3+ for Ravenwing gives a 88.89% chance of saving. 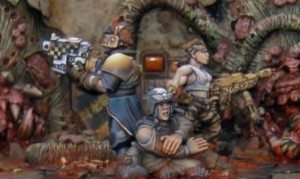 The STR/Toughness effects can only be applied when modifying STR/Toughness within 2 pips of each other. A scatter laser does not care if you are a marine or a Fire Warrior.  In both cases the weapon will be wounding on a 2+.

This means that when facing armies with large amounts of high strength weapons, armies that bank a lot on higher toughness units will find themselves at a disadvantage when compared to lower toughness units.

This is why today, where STR 6+ weapons are commonplace, you are seeing less armies that spam plague marines.   Those armies put to much of a premium on the cost of the toughness, which is not worth it when high STR weapons are commonplace.   When bolters were the main weapons, those units fared much better.

This is also why units such as ‘warp spiders’ are effectively just as durable as tactical marines when your opponent has brought nothing but Eldar Windriders with scatter lasers.

This is also why ‘psybolt’ ammo was such a bad idea back in the old GK codex.   Making a lascannon STR 10 has much less of an impact than giving storm bolters and autocannons +1 STR.   This is because the lascannon is usually out of the 2 point pip range, where the autocannons and storm bolters were always in that sweet spot to maximize effect.

However, a 91% damage mitigation is still complete rockstar.   Anytime you can pick up the dice and reroll your save, you will find a significant increase in damage resilience.    That’s part of what makes ‘Fortune’ such a great power.  Even when just using the 3+ save of the armor, the effective save is 8/9 or 88.8%.

Given the ITC changes, this means that there is not that great of a difference between a 3+ rerollable and a 2+ rerollable.   The 3+ rerollable will only take 23% more damage — a fairly small percentage when we are working this close to the extreme boundaries.    Therefore, if you can find a way to get a 3+ rerollable, it will greatly increase the unit’s damage resilience.

Being able to reroll 1st, such as being a daemon of Tzeentch is another good way to increase damage resilience.   As with the other damage resilience increases, the closer the base save is to the boundary, the greater the effect.   Rerolling ones on a 2+ is the most extreme example, but even rerolling 1s on a 3+ is very good, providing a ~75% damage resilience.

Reducing your opponent’s ability to deal damage, such as forcing your opponent to make snap shots against you will have a huge impact. (Nurgle warlord trait ‘PlaugeFly Hive’)   Conversely, this is also why powers such as ‘Doom’ or twin linked weapons are so effective — because they lower the resilience of the target.   I know it’s odd to think that a twin-linked weapon in that capacity.

Other ways to remove layers of mitigation are to have the AP weapons that ignore the armor saves, or to use “Ignores Cover” weapons.    When these two traits are combined, they have devastating effect as they just strip away your opponents mitigation.

It’s All About Ratios

A lot of understanding mathhammer is understanding the ratios of effectiveness vs point cost.    Sure, you might be able to make an extremely durable unit by taking 10 Grey Knight Paladins with an Apothecary and two Brother Captains in Terminator armor,but you are looking at a 800+ point unit.

How much more durable is that paladin squad, expressed as a percentage, than an equal number of GK Terminators?   How does it compare to two wraithknights?   120 orks?

The idea here is that you just can’t take a unit and load it up with bling and expect it to kick ass, as it might be greatly outclassed due to ‘point bloat’ in a unit.

However, going cheap on a squad also can have significantly reduce that squad’s durability.   The 20 point upgrade in the aforementioned paladins increases their “Time to Live” by 50%, which in a 550 points unit is a no-brainer of an upgrade!

The concept here is ‘Resilience per Point’ of your unit.   How good is that unit when compared to others on a per-point ratio? 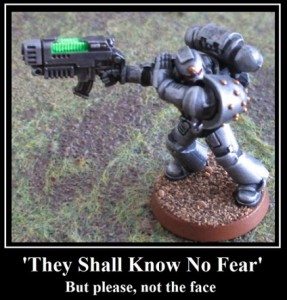 Another concepts of understanding unit resilience is knowing to use the right tool for the job.   If you know a meltagun has a 14.8% to wound the wraithknight, but a grav gun on a bike has an 67% of inflicting a wound, then you know that the grav guns are tools to use!

These are the key takeaways.

Mathhammer is all about percentages, and since Frontline Gaming sells Games Workshop product at up to 25% off,  you can apply some mathhammer to your bank account.

16 Responses to “Mathhammer : A Review of Resilience”