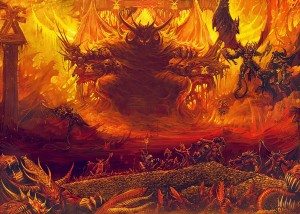 Its another day so that means another Khorne Daemonkin review brought to you by the Sultan of Swank himself – Goatboy.  Today I want chat on a model that feels so spot on from a physical design stand point that I can’t help getting excited every time I see one of the table top.  The Kytan Destroyer is a pretty awesome looking Khorne “Knight” and while the rules are not 100% locked in yet, they are still 100% awesome. As usual you can read up on more tactics at the Frontline Tactics Corner.

The Kytan Destroyer is a Forge World combo kit that utilizes part of the Lord of Skulls Kit mixed with a resin set of legs.  The amount of kit bashing I have seen utilizing the upper body of the Dozer king is crazy so it is awesome that Forge World built a kit to make it easier.  The unit is a Super Heavy Vehicle marked for Khorne and its design is to get in, get chopping, and hopefully killing as many things as it can for the Glory of the Blood Throne. 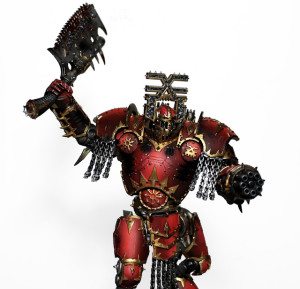 I remember when the Lord of Skulls first came out.  The blogs were abuzz with how to “fix” the Tonka toy looking model as the dozer blades felt a little out of place with the normal 40k aesthetic.  I even thought about getting one and trying to kit b bash my way with creating a cool set of legs.  Lucky for me, Forgeworld came out with this upgrade kit and I don’t have to worry my poor little head about figuring out a way to create the cool Knight legs.

The initial rules design feels very Khorne like as it utilizes the same D Slapper Axe of Khorne rules as well as some modified shooting abilities to allow it to move forward, get involved, and start punching.  Plus FW has said it can be utilized in a Khorne Daemonkin (KDK) list as a replacement for the Lord of Skulls.  This is a big Win Win and he can do a lot of damage and his cheaper cost means he could see play while the Lord of Skulls sits on your shelf. 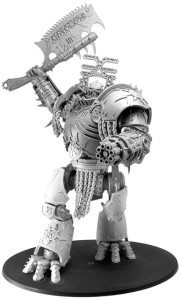 The Kytan Destroyer is built as a roaming murder machine with the Super Heavy Walker Rules.  It can get to just about anywhere on the table and start its “blood” gathering business for its Skull demanding master.  I wish he was a little bit tougher as the Brass Scorpion isn’t too much more with more shooting, better assault distance, and a heck of a lot tougher outer shell.  Still – there will be armies that can’t deal with this guy as he moves in and gets to swinging that giant Axe of Khorne.  I see him as a “threat” option that is utilized to make the opponent take a heck of a lot to remove effectively – thus letting your other “squishy” Khorne bits get their jobs done without the worry of getting shot off the table top. 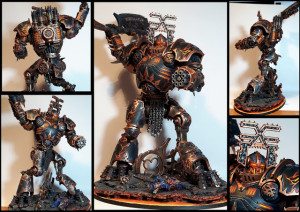 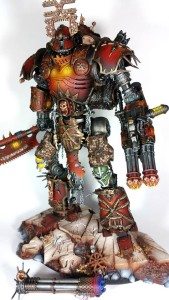 Tactics wise this is a cheaper LoW slot for the KDK list.  This lets you take some kind of super tough option that will leave you more points for those pesky Gorepacks I have talked about.  I don’t know if it is the best option as while it isn’t to expensive the Khorne marked Chaos Knight might be a better overall option.  The Ion Shield will help it out and as Khorne doesn’t really like to take Cursed Earth options it gets harder to fit that or the Grim in.  Still he is a pretty fun option.

The army list thought looks at utilizing him in a regular Kdk CAD and then getting some Gorepack formation love on the side to ensure a steady stream of Blood Tithe, protection from deep striking Melta and maybe utilizing some other options.

The idea for this list is to do the Russian Doll Warlord trick by trying to generate enough tithe to make a Daemon Prince then a Blood thirster.  The Kytan Engine will give everyone a +1 to their Invulnerable save and the Blood Thirster will give everyone a +1 to their attack as well.  Plus he will be a pain to deal with as he will have the options to D Axe of Khorne you or just go crazy with a ton of extra attacks.  The Hounds will keep things at bay and help protect your Kytan engine in the middle.

It isn’t the most “tricksy” list out there but it feels like it could give some armies some trouble as it runs around and has enough “threats” to make someone worried they could get in too close.  I could fit in the grim but without Fateweave it is just not viable.  The new Khorne options from the Curse of the Wulfen book might be very helpful into making this list tick.

The fact the Kytan engine can generate Blood Tithe for you is very helpful and again – having a fast Super Heavy vehicle with enough “melta” protection is a great thing.  Plus we all know how exciting it can be when he gets that D Slapper into your face and starts to pile on the heads for Khorne.

In a normal Chaos Space Marine list I feel he lacks when compared to the normal Chaos Knight.  Again if you are going to be playing Khorne it is better off to go KDK or the new Chaos Space Marine Khorne formations.  The lack of focus in the normal CSM options is just not worth it with what you get from throwing your vote to the all might Khorne.  Feel the Skull with Khorne!

Leave a Reply to Trentat