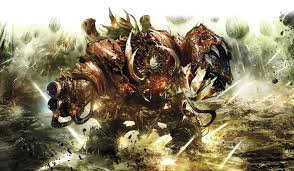 Scuba Steve here to give y’all the big ol’ lowdown on the craziest hombre to ever to crash the neighborhood hoedown. The Helbrute is that wild and crazy hombre of which I speak… the world has gone too long with this burly cowboy collecting dust in closets or sitting unbuilt in starter boxes around the globe… together… we can bring Helbrutes back. #bringinghelbruteback As always, be sure to check out other great articles in our Tactics Corner!

Alright, so let’s break the big guy down, take a look at his options, and find out what the best ways of running him are. All-in-all, the KDK Helbrute’s stock load out and all of his additional options are very simple. We won’t spend much time discussing weapons today, I think our time is better spent talking about how you want to play him over how you want to build him (I also believe this to be more important). Alright, let’s break it down: 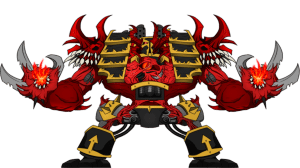 Let’s break all of this down into two categories: “Good” and “Just Okay”, so we can have a better idea of what about this unit shines and what doesn’t. 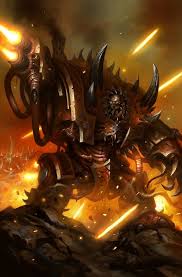 What the Hell?! (Am I supposed to do with this model)

I have been thinking long and hard about the best way to play with a Helbrute and a few ways come to mind. You could either play him as an offensive shock troop (which I’m going to call the “Brawler”) or you could use him as a back-line defender (which I’m going to call the “Babysitter”). Both of these styles would be a good place to start when finding what play style(s) work best for you on the table top.

Both of these tactics work and can be easily dropped into a Blood Host Detachment. The Helbrute doesn’t require a big formation to include in this Multi-Formation Detachment, its dataslate can simply be included as an Auxiliary Dataslate. Probably the cheapest of the dataslates that can be included, so that’s a big bonus. 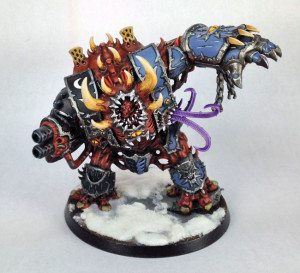 There is always a downside to every unit, the issue with this guy is he has a tremendously big downside. Even though he may be cheap, once you start throwing upgrades on him, he starts to hover around the price of a Soul Grinder. If ever you have a choice between Helbrute and Soul Grinder… Always take the Soul Grinder. The problem is that he just doesn’t do enough… sure, he could blow up a vehicle here and there… slaughter a squad of dudes, etc… but he just doesn’t have enough power to really contend on the top tables. Hypothetically, if he could Deep Strike (instantly better), if he had the same number of attacks as the new Space Marine Dreadnoughts (instantly better), or if he were just cheaper (I’m thinking in the ballpark of an Ork Deff Dread (80pts or so). I would accept all of the above as viable revisions to get him on the table more often. As he stands now… just take a Soul Grinder…

Hell Bent on Being Awesome!

Alright, just because I’m determined… I want to leave you all with a challenge. Find a place in your list to put a Helbrute, find a way to make him useful! Give the two suggestions I’ve stated in this article a try and write in the comments below what you think. Are there better ways of doing it? How have you found him to be the most useful to any list!

← Furry Road – The Troll’s Path to Glory
Guest Editorial: The Ork Blues: To Keep the Green Tide or Not? →

Leave a Reply to Marandamir