I Can Age of Sigmar and So Are You!

Jason here to talk about one of my FAVORITE talking points from the past few months, Games Workshop’s Age of Sigmar.

Oh my, I believe I just heard the sound of thousand rolling eyes followed by the collective groaning of hundreds of outraged readers but please, give me a chance to speak!  Won’t you let me make my case that Age of Sigmar is a refreshingly simple take on the familiar tabletop wargame?  Will you not stay your click of the back button? Brothers and sisters PLEASE! Lend me your attention just for a single moment and I promise to take you on a journey of discovery and new found passion for a game without a points structure. 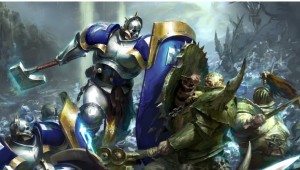 Throughout my journey through annoyance, slight interest, and finally hysterical enthusiasm for the game I’ve noticed that there are a couple key points to keep in mind when first trying a game of Age of Sigmar that will lend themselves towards making the experience and enjoyable one for you and and your friends.

If you’re still reading this and haven’t left to leave an angry comment on someone’s article where they express their opinion about the latest Warhammer 40k unstoppable uber-formation, I say to you congratulations.   You’ve just learned 5 excellent ways to ease gracefully into Age of Sigmar with your friends, or mates, as Reece likes to say when he pretends to be from England.  I’ve got your ‘brilliant’ right here, mate *obscene hand gesture and hip movements*!

If anyone is interested we’ve been working on a an FAQ/Errata system for Age of Sigmar that can be used in an organized setting. The goal isn’t to change the game too radically but really just fine tune some of the more contentious areas of the game as well as giving players a guideline as to how to structure their army list when playing against players they have not met before.  You can view the FAQ/Errata here. Please let me know what you think of what we have so far in the comments below.