Aoooooo! Time for some more super space viking reviews, this time: The Ironwolves! Be sure to check Frontline Gaming’s Tactics Corner for more great articles.

The Ironwolves are a Great Company of Space Wolves that go to battle mechanized, crushing the enemies of the Imperium beneath their treads!

The Ironwolves have some exciting special rules that make this a very appealing formation. It revolves around troops in transports and gaining benefits for that combination. It also provides for some interesting playstyles and combinations that are not so often seen on the battlefield and in many ways reminds of of a 5th ed Missile Wolves list which was very effective and popular in that edition.

All units must take enough dedicated transports to transport all the models in the detachment. 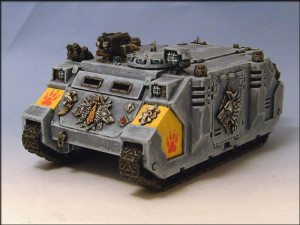 This is a very cool formation! I seriously dig it. It provides for some fun options and play styles. So first, the Command Benefits here are bad ass. Free upgrades on vehicles saves a ton of points! Razorbacks jump out at you right away as with the turret weapon upgrade, a Hunter Killer Missile, Extra Armor, Storm Bolter and Dozer, you really get some fun benefits you would not normally take. Additionally, a Land Speeder Typhoon with Multi Melta for only 50pts is no joke. You can pack in 4 of them for a measly 200pts and that is some serious firepower!

Additionally, the ability to move 12″ and disembark troops is very, very good. If you have a unit of say, Wolf Guard packing Combi-meltas, this extends your reach considerably. Or, you pack some assault units in an assault vehicle such as a Stormwolf or Land Raider, and your threat range is huge! With a Land Raider, you can make a first turn charge with a decent charge roll.

The -2 leadership on Tank Shocks can win you the game if it scares an enemy unit off of an objective or off the table. In the same vein, an extra 6″ of movement on a flat out move can allow you to reach out and snag an objective that would have otherwise been out of reach. Lastly, if you form the Wolf Claw Strike Force detachment, rushing your enemy and dumping out hordes of infantry out of their transports and then benefiting from Counter-Charge is no joke. Very useful.

I would run this formation with Wolf Guard packing Combi-meltas in a Razorback with all the fixings (I actually prefer the twin Assault Cannon to the Las/Plas load out), 3 units of Blood Claws in Razorbacks with all the fixings and 4 tricked out Land Speeders. Alternatively, Grey Hunters packing special and combi weapons is not at all a bad choice…again in tricked out Razorbacks! 1-2 Long Fangs are still a solid unit and fitting them with your choice of weapon load out (again, with a fully tricked out Razorback) to camp the backfield will be a great addition to your list. A fun trick I have been using is to take Ulrik as my Warlord, stick him in the back with the shooting units where his awesome buffing auras (Preffered Enemy and Stubborn) as well as granting Zealot, FnP 6+, and Monster Hunter to his unit make for a nice shooting combo and keeps your Warlord safe. If you add a CAD to your list, some of the very awesome Rapier artillery units really benefit from these auras, too.

I’d pass on the Wolf Scouts or Lone Wolves for this formation.

If you really wanted have fun with this army, run them in Drop Pods, but take Deathwinds and Locator Beacons on everything and combo that with another detachment featuring lots of Deep Striking units which can benefit from the Locator Beacons! That could provide a surprising, fun army. Also, all those bodies piling out of missile shooting Drop Pods, packing special weapons and benefiting from Counter-charge is nothing to sneeze at.

A solid Auxiliary formation to make the Wolf Claw Strike Force would be Murderfang in a Dreadnought Drop Pod or the Spear of Russ to keep in the mechanized theme. Taking a second Ironwolves Formation to gain the Howl of the Wolves Command Benefit is not a bad idea as you gain the maximum mileage out of the free points on transports. Or, simply skip out on the Wolf Claw and pick and choose some other detachments to create the army you want.

In all, this is a great formation and allows you to play your Space Wolves in a fun, unique way. How would you run your Ironwolves?

Leave a Reply to Jason