Hopefully you all caught the game last night where we debuted the new Lava F.A.T. Mat. We also showed off the new Daemon Tetrad list against the Tau monster bash. Here are the post game thoughts from our two players. 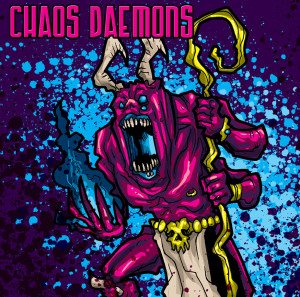 So not too bad for my very first time playing Daemons, and my very first Daemons list. I think the Infernal Tetrad formation belongs in a niche part of the meta reserved for 5 knights, Greentide (RIP), and daemon summoning. It is a formation that can give certain armies a lot of trouble if they are unprepared for it. I obviously need more playtesting to optimize the load outs on the princes but I think I have an idea of what direction the list needs to go in.

– Obviously Fateweaver needs to stay, he is just too strong right now to not add into a serious contending Chaos list. Sure he is a bit easy to kill, but he is also easy to hide away on a reasonably terrained up board to insure his survival for at least two turns.
– I’m not sure where to go with troop choices here. I love the idea of deep striking pink horror squads with potential strength D shooting however they just aren’t very good at that. Looks like it’s just the ol’ hide and summon for the little pinkies.
– The Tetrad really can be strong especially if it rolls up the right warlord trait. Personally I think the Tzeentch traits in CotW (Curse of the Wulfen) give you a 50% chance at getting a major game breaking trait.
– You really have to go all out summoning here though. You do not have the warp dice to be able to cast every power you need, so this list might just revert down to just another varient of the Daemon summoning lists.
– I was really disappointed at the Daemon of Khorne, he just doesn’t have very good melee options, no access to a better invuln save without help, and is just clearly overshadowed by his KDK bloodthirster brethren.
Frankie’s list looks unstoppable, he challenged me to beat his Tau and I did not rise up to the occasion. I didn’t feel like playing my marines and really thought I had a chance at beating him with a resilient, psychic phase focused Daemon list. I also wanted to try the Infernal Tetrad out of the CotW book because it looked so interesting and different. The next time I play Frankie’s Tau I am going to bring my A game and hopefully it will be a better showing then the romp it was this game.

Frankie’s thoughts:
So last night was a great showing of Tau Firepower. Unfortunately for the Daemons it didn’t end well. The first couple of shooting phases didn’t go the way I had thought and was looking grim for ye ole Tau. But then the tides changed and the bash brothers aka the Stormsurge’s put on their dancing shoes. After stomping out a Daemon Prince they killed another Daemon prince each round of shooting there after. Which was the beginning of the end for the Daemons.
The Tau have a ridiculous amount of shooting, and paired up with the Stormsurge’s close combat I believe they are a tournament winning army. The Daemon Tetrad seemed to be pretty strong as well. If Pablo had summoned more daemons and concentrated on some of his other powers I think he could have easily turned the game around. Sharing the warlord trait with all the Daemon Princes is really strong and will for sure help that list win some games. Unfortunately Daemon Princes are expensive and they do not leave a lot of room for extra toys. With some tweaks to the list and some experience I think the Tetrad will be a contender in the future.
Hope you all enjoyed the game and the new F.A.T. Mat. which will be available to purchase March 14th!