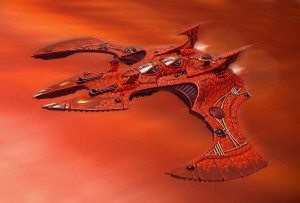 Welcome back to the third and final installment of the Eldar Corsair codex review! Zyekian here to finish up with a look at the army’s heavy hitters.  If you haven’t checked them out already, head on over to Part I and Part II for a further look at Forgeworld’s Space Elf Pirate army. Check the Tactics Corner for more articles!

Corsair Voidstorm Band (Grade: D): Essentially a unit of Reaver Felarchs (sergeants) huddled up without their Reavers.  In theory it’s the wheat without the chaff.  They come standard with heavy mesh (4+) armor (why not jet packs?) and the upgrade to 3+ armor is a hilarious ten points *each*.  It’s difficult to figure out what Forgeworld was thinking with the cost of most other wargear options as well.  Blast pistols for +20 points?  Perhaps the least-bad way to run them is a 5-elf unit assaulting out of a Venom, maybe sprinkling in a few venom blades.  Rage from the Prince will give them five WS5 attacks each on the charge which isn’t too shabby, however they probably lose their slot to our next unit…

Corsair Malevolent Band (Grade: B+): Away from the protection of the craftworld some Corsairs begin to fall to the dark terrors of the warp.  Malevolents are the the suicidal space elf pirate berzerkers that are hated even by their own warband.  This unit sports a highly unusual set of characteristics:

This oddball unit has some real potential if it can avoid eating S6 wounds.  A big bag of fearless FNP multi-wound guys is exactly what opponents such as Necrons don’t want to see in assault.

Corsair Wasp Squadron (Grade: B): A War Walker on cricket legs packing a stock Kinetic Shroud and the Reckless Abandon rule.  The jump pack can’t deep strike but may be used in either the movement or assault phase:

It’s nothing to write home about in assault but the threat to chicken kick weakened units it real.  It’s weapon options are that of a War Walker plus the option of stock splinter cannons.  The new edition saw them gain open-topped but overall Wasps are a solid multi-use unit. 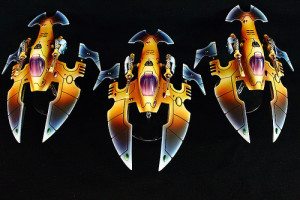 Corsair Hornet Squadron (1-5) (Grade: A+): Hornets are amazing.  Hornets are special.  Hornets rank among the best units in all of 40k.  For 80 points we get an AV 11/11/10 2HP ball of fury.  Forgeworld apparently thinks pulse lasers are the same thing as the rest of the heavy weapon options because they all cost the same, therefore there’s never any reason to consider anything but the pulse.  Hornets are cheap, fast, long-range vehicles that fire four S8 AP2 shots.  That’s not all though because Hornets get a bag of tricks on top of that that.  Pure gravy.

There’s not much more to say. Hornets are superb.

Corsair Vyper Squadron (1-5) (Grade: B): Everyone’s favorite mildly underrated Eldar vehicle gets a chunk more value stuffed into it with scatter laser and lance upgrades costing less, plus the addition of scout.  24″ TL lasblasters are also a more usable secondary weapon than the point-blank ‘cats, plus they can purchase void burners for +5 points.

A stock Vyper costs just 40 points with a shuriken cannon and the lasblaster – and that needs to be weighed against a 30 point jetbike.  50 points for two shuriken cannons is less points-per-cannon than a jetbike.  Vypers are solid.

Corsair Nightwing (1-2) (Grade: B): The aerial acrobat with the Stealth and Agile jinks on a 2+.  Good thing because despite the large model it has only 2 HP on its AV10 frame.  Vector Dancer and Deep Strike help it on both offense and defense while it tries to punch through armor with its decent armament: a pairs of bright lances and shuriken cannons.  For just 125 points it’s a solid buy, however beware the somewhat generalized weaponry.  The lances want to hit heavy armor while the shurikens want to hit meat.

Corsair Phoenix (1-2) (Grade: B-) The Corsair ground-pounding flyer checking in at a hefty 205 points.  Strafing Run gives it BS5 on its substantial armament:

Vector Dancer and deep strike work in tandem to make sure the Phoenix is always in position to deal the pain while Stealth helps protect its fragile AV10, 3HP hull.  The Phoenix brings some vicious firepower to the table but needs to be protected.  200+ points in an army with already low model count means it’s key for it to get work done.  A kinetic shroud is recommended, as it will remove the need to jink for at least one round. 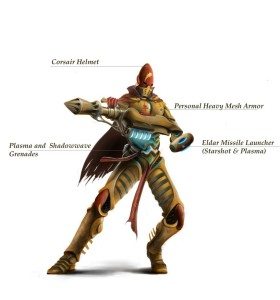 Corsair Balestrike Band (Grade: C): Essentially heavy weapon Reavers, they suffer more than any other unit in the codex from not being Cloud Dancer Jetbikes.  Balestrikers come stock with a lasblaster and by default are just a Reaver.  Then they pick from the following optional upgrades which are takeable on all models:

With +5 point jetpacks factored in we’re looking at 25-30 points for most of these guys.  There’s simply no reason to ever take a 30-point Balestriker with splinter cannon when a jetbike with the same weapon costs 25 points.  Our reasonable choices here are few so we have to get creative, perhaps by running a group of five models with no jetpacks equipped with shuriken cannons in a Venom or in ruins.  That’s fifteen S6 bladestorm shots for just 100 points, far more offensive output than a hundred points of Cloud dancers would net.  Other than that this unit is probably best in small units of five, running just a model or three with heavy weapons.  Relentless jet packs will allow Balestrike Bands to skip around delivering firepower where it’s needed, if not in overwhelming quantities.

Corsair Lynx (1 per detachment) (Grade: A-): Forget what you knew about the old Lynx and start from scratch.  The new version is a 5 HP otherwise-standard Falcon chassis flyer with a skimmer mode that it will almost always be using.  The thing flies like a duck though, unable to jink in the air and only snap fire.  It can however begin the game in skimmer mode on the map.  Lynxes have the Deep Strike rule and with kinetic shrouds are able to drop in and enjoy a 4++ re-rollable invulnerable save without having to jink.  If the Corsair player is going second this strategy is advisable because the thing’s fearsome armament makes it a prime target.

Opposing players will go all-out to end a Lynx’s existence; the wise Corsair player will plan for this by deploying void shields, deep striking, or even using it as bait for the rest of the list to work with less pressure.  Kinetic shrouds are strongly advised because with so much firepower the Lynx really doesn’t want to jink if at all possible.  If left operational for long this unit will remove Knights, Wraithknights, and well almost anything with ease.  Due to its fragility though it’s best for a list to be built around protecting it.

Corsair Warp Hunter (1 per detachment)(Grade: A-): The Warp Hunter is defined by its truly ferocious gun.

The D-Flail has a special rule called dispersed which turns D chart rolls of ‘6’ into ‘5’, toning it down somewhat but still keeping it a notch above scythe-D.  At 185 points the Warp Hunter isn’t cheap and like the Lynx, opponents will go all-out to destroy it or at least make it unable to fire for a turn.  For that reason shrouds and void burners become an attractive option as they assure the Hunter at least two turns of shooting after deep striking in.  Bold players will deploy this vehicle in their Sky Raiders coterie for the 1D6 deep strike and attempt to place the rift template in a critical location while running the 4++ rerollable save.  There’s a lot to like here as long as the Corsair player has a plan to protect it or deploy it creatively.

Corsair Night Spinner & Corsair Fire Prism (1-3) (Grades: B): Both tanks check in virtually identically to their Craftworld counterparts with only the Corsair wargear options differentiating them.  Neither have the combined-fire option found in the Eldar book however.  One thing worth pointing out is the under-slung weapon option here includes a Splinter Cannon for +10 points.  For a Night Spinner which is likely already targeting infantry this is an upgrade to get every time.

Corsair Fire Storm (1-3) (Grade: B-): A Falcon chassis anti-air tank for 150 points. The decision whether or not to bring it depends on how prevalent flyers are in your meta.  As a specialist unit, well you know how to use it.

The gun will chew up flyers, flying monstrous creatures, and skimmer fairly well;  heavy 6 TL means it can still fire with some accuracy when jinking.  The drawback here is that often times it’s desirable to force an enemy flyer into jinking; with ignores cover they never will.  The Corsair player needs to hope the array gets the job done in quick order, an iffy prospect with a S6 gun facing AV12.  That and Forgeworld no longer sells the model.  *sigh*  Most players will take a Nightwing for their anti-air needs. 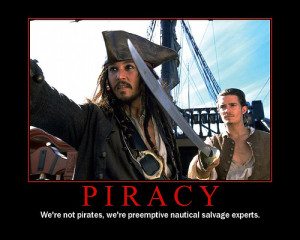 This wraps up the Corsair Codex overview, hope you’ve enjoyed reading about this fun, fluffy army.  Next time you’re looking at expanding your collection why not give these guys some consideration – because they really are as fun to play as they look.  Comment down below with thoughts and ideas and as always make sure to check out Frontline Gaming’s Tactics Corner for more reviews and tactics articles and remember, they sell Games Workshop product at up to 25% off, every day!