We’ve got a Master’s playoff game for you all, tonight! 8th place finisher at the LVO, Mike Snider and his Crons vs. Petey Pab and his White Scars Battle Company! Tune in at 7
I’m looking forward to this game.  Pablo is always a blast to play with, regardless of how the game is going.
In regards to the game, this is the San Diego Master’s League, so I expect a good deal of list tailoring from Pablo.  We played once already in the regular season, and Pablo absolutely out-list-tailored me.  However, he wasn’t familiar enough with the army he brought, and misplayed it by moving an imperial knight out of his void shield, allowing my gauss to hit it turn 1, and by leaving a small gap for my scarabs to run through to get to his void shield generator.  I don’t expect to see the same sort of mistakes from Pablo again.
I’ve decided to start tailoring my list a little, since my standard list can’t actually bring a void shield down, and I’ve gotten to play against 4 void shield generators so far in the masters league.  I fully expect to see a void shield in this game, so I’ve decided to include Tau allies to help me out a little.  Even if he doesn’t run a void shield, there should be vehicles to pop, and I’m comfortable with being able to shield the relatively squishy Tau an alpha strike, if he decides to run that style of Marine army.  And I suppose that the fire warriors being objective secured could be useful too.
Anyway, here’s the list:
Decurion
Canoptek Harvest
Canoptek Harvest
Allied Detachment 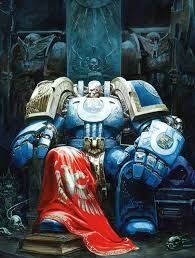 Oh boy I’m in for the fight of my life. My record against Necrons is really bad and I don’t think I have ever beaten Michael. I have been readying myself for this game though and I’m prepared to give Michael everything he can handle. Of course this is a best of 3 per the 40k Master’s League rules and if I lose tonight I’m not out yet! But hey, this is the Quarterfinals and parity in competition can rear it’s pretty head whenever it wants.