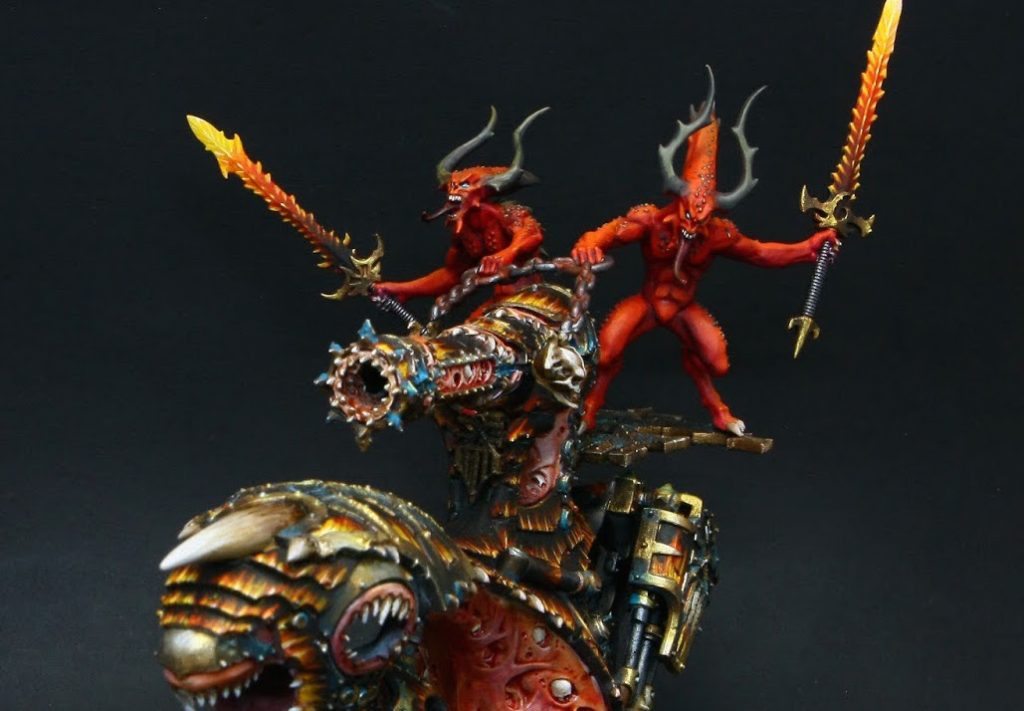 Loopy is back to review another under-appreciated unit, the Skull Cannon of Khorne. If you find this helpful, check the Tactics Corner for more great articles!

The terrifying, gnashing bundle of hate and gore known as the Skull Cannon doesn’t really enjoy a lot of fanfare, though it can provide some useful utility to an army that might find itself fighting in a specific meta or when the need for late-game shooting arises. As with any of these reviews, my goal is to describe the ways in which someone might use the Skull Cannon; it is not to chuckle at the audacity of its existence in your list in the first place.

If you’re actually paying the 125 points for a Skull Cannon, it’s likely to be in a Combined Arms Detachment considering it isn’t an option in the War Engine Auxiliary choice for a Blood Host Detachment. If you’re taking the Charnel Cohort route for your Khorne Daemonkin army, then it may actually be quite a good idea to include some Skull Cannons since the main conceit of the Formation is deepstrike shenanigans and those assault units will need some breathing room and support wherever they land. 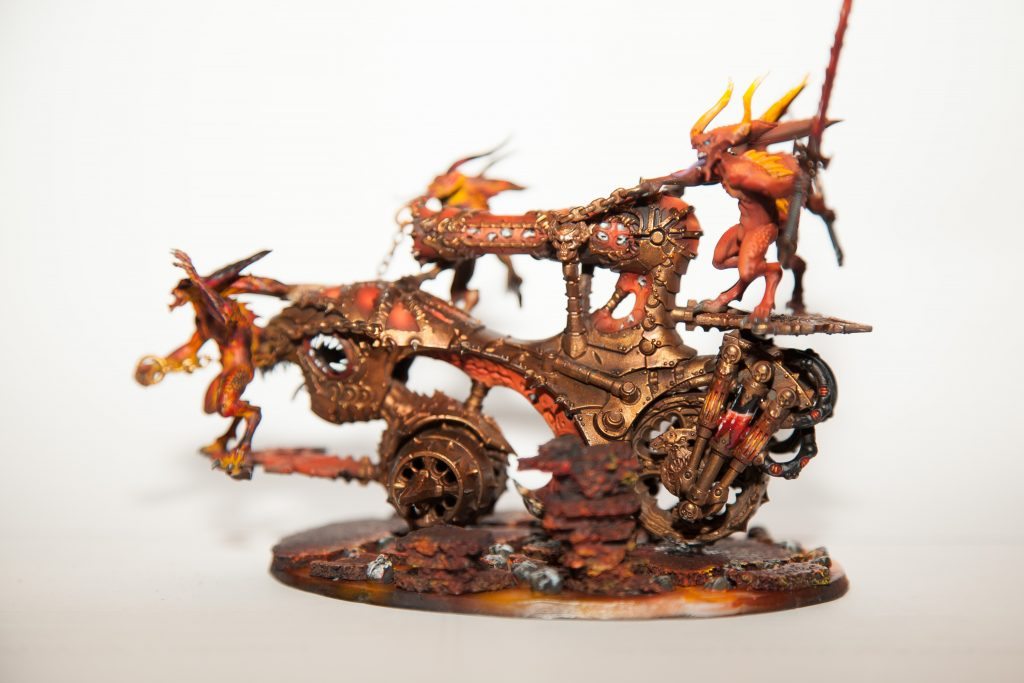 Ignoring the concept of allies, the Skull Cannon, Soul Grinder, and Defiler are the defacto fire support for the Khorne Daemonkin army. Unlike the walkers, the Skull Cannon is much more of a dedicated shooting unit. Although it does have uses in close combat, it doesn’t devote a whole lot to that task and costs fewer points. Although the Defiler and Soul Grinder’s main weapons can rip through most armor saves with their AP 3 (and most vehicle plating with their Ordnance special rule) the Skull Cannon’s Strength 8 AP 5 Large Blast has Ignores Cover. This, coupled with the impressive Ballistic Skill of 5 enjoyed by the warlike Khorne Daemons means that, in the state of modern Warhammer 40k, a Skull Cannon might net you better results in the long run. Will it help against something that already has AP3 and a cover save worse than 3+? No, but there are far more units than these in the game and many of them are not worth assaulting with a Bloodthirster. Small units sitting on Objectives in cover, however, and some units relying too heavily on 2+ cover saves will be among the Skull Cannon’s chief targets.

Granted, the Skull Cannon may not have any backup weaponry, but it’s a fair price point for something that can chew up infantry and light vehicles behind cover while your melee units find skulls elsewhere. Of course the ability for the Skull Cannon to negate your Initiative penalty for assaulting through cover with its cacophony of Dreadskulls cannot be dismissed. This isn’t useful for some units, but your Flesh Hounds, Bloodletters, some Bloodthirsters, and many other units that you actually use (read: not power armor) will thank you because they’ll be swinging at their normal initiative. Don’t discount this ability too much. It would be questionable to take the Skull Cannon for this ability alone, but it has pretty good shooting already and against a savvy opponent who actually knows what they are doing, the Dreadskulls can mean the difference between your unit killing its enemy or dying ingloriously before it can swing.

The Skull Cannon’s real competition might be the Forgefiend. With its impressive AP weapons or, alternatively, impressive number of direct fire shots, it’s quite a contender for the fire support spot in your army (if you choose to even bother with such things). It can, theoretically, engage any unit in the game and expect to do fairly well while the Skull Cannon cannot target flyers at all. Comparing these two units, it again comes down to your meta and terrain situation where you play. If you find yourself constantly battling 2+ cover saves and alpha strikes, it still might be worth at least trying a couple of Skull Cannons instead of a Forgefiend. If your meta features a lot of flyers and light terrain, then the Forgefiend might be the thing for you depending on the makeup of the rest of your army.

Note that the Skull Cannon’s weapon has a 36″ range. Although the Cannon is fairly mobile, a centralized deployment is usually best. 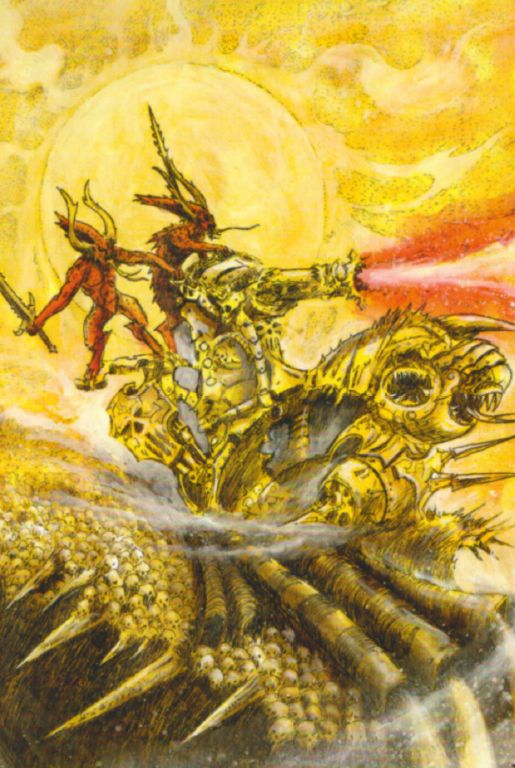 Even though the Skull Cannon’s main purpose is to clear off Objectives and incapacitate light vehicles with its cannon, it does have some ability in assault. As a Chariot of Khorne with Furious Charge, it deals d6 Strength 7 hits with its Hammer of Wrath. In addition, the Cannon’s Bloodletter Crew allow it to pile in and make 2 attacks at Strength 4 AP3 (str 5 on the charge). Fortunately, this crew doesn’t have to worry about being destroyed by close combat attacks since they don’t count as riders, though the Skull Cannon is treated as having Weapon Skill 1 versus these enemies.

Clearly, this close combat ability isn’t something that should make you go looking for trouble when you’ve got other things to worry about on the battlefield. However, if your opponent decides to commit a unit to assaulting your position or stealing one of your progressive objectives, the Skull Cannon can either make them pay for it or force them to commit something a little beefier to the task. Either way, you’ve forced their hand. Beware, however. With only 2 attacks in close combat and a 12 front armor, it’s really easy for the Skull Cannon can get trapped in close combat with some pointless unit with too many wounds for its own good that refuses to fail leadership checks.

Don’t forget that, if Skull Cannon eats someone (or takes a bite out of them), it regains a hull point on a 4+ with its Gorefeast ability. It’ll happen rarely, but could be pivotal considering the work that needs to go into taking hull points off most Daemon Engines. 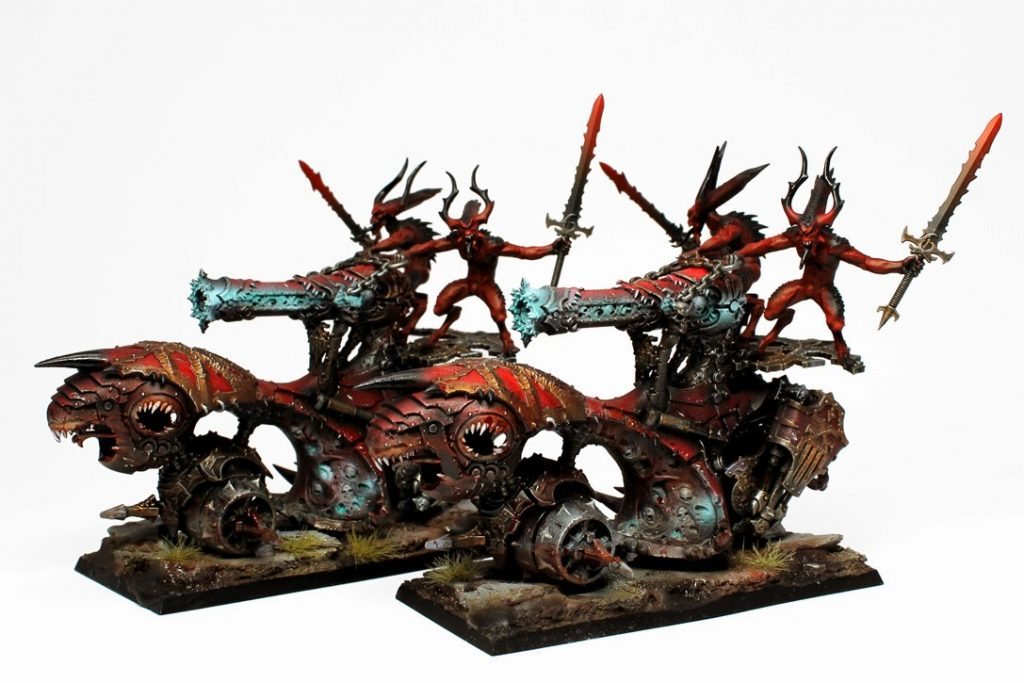 There is something kind of frustrating about AV12 with a 5++ save, even on an open-topped vehicle. Daemon Engines have a terribly annoying way of surviving more than one volley of fire. Granted, any army worth its chops can certainly kill a Skull Cannon if it puts its mind to it, but sometimes the number of units required to do this can become excessive, especially if your opponent isn’t rocking prescience or some other re-rolling mechanic. Sometimes 40k is about presenting your opponent with a number of bad choices (or only bad choices).

Any unit can feel useless if your meta is flooded with a lot of alpha strike armies. The Skull Cannon can find itself in a situation where it’s a sitting duck amidst a flood of ridiculous Tau shooting or deepstriking Space Marines with grav weaponry. Sometimes the best you can do is stick it in 4+ cover (hoping your opponent blows some Markerlights for that measly -1 save reduction) and deploy the Cannon so it’s pointing at something you want to kill in your next turn in case it gets immobilized.

The Skull Cannon is no Invisible D-Thirster shadowed by Be’lakor, but we can’t all take the blue ribbon at the fair, can we?

Assault armies can, from time to time, find themselves impossibly out of position and, as the game winds down, summoning forth assault units for your KDK army becomes less and less useful. The chance they’ll get to assault at all dwindles to nothing around turns 5 and 6. In these cases, sometimes a Skull Cannon is just the thing to the tune of 6 tithe points. It can Deepstrike into position and blast whatever ragged scoring unit you need to get rid of while your other surviving units mop up elsewhere. This is especially true if Be’lakor or whatever other mobile shenanigans you brought has already been eliminated. If the game does continue, the Skull Cannon can then charge in and get itself stuck in on top of one of your opponent’s objectives. 6 Tithe points is a rather dear price to pay, but sometimes you can’t put a cost on the right tool for the job at hand. 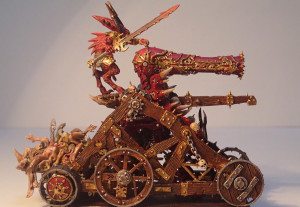 You Had One Job

This article doesn’t insist that a Skull Cannon is the answer to all of your problems, but it does have a part to play if you think it’s cool and want to use one in your army. Unlike some other Daemon Engines, the Skull Cannon does not really suffer from an identity crisis. It does its job with reasonable certainty and you can’t ask any more from it than that. Asking 100% certainty from any unit is for players who wouldn’t even consider taking this unit in the first place.

Miniature painting credits:  Nadya from HopeRiver’s Valley, highdie40k, ThirdEyeNuke from A Tale of Painters, drew h from The Greater Army of Khorne.