I hope everyone has shaken off the post-LVO haze… I’m not sure I have yet. A few weeks back I proclaimed I was skipping the 40k Championship and was going to focus on Infinity. My logic at the time was that Infinity was going to let me bring the army I wanted instead of chasing the power curve, I was going to get to interact with my fellow gamers more, it would be easier to transport, and I wouldn’t be so burned out that I couldn’t enjoy being in Vegas.

First off, I really need to thank JT, our TO, for putting all of this together- we had ten tables full of beautiful terrain, the missions were clearly briefed, things started and ended on time, and everything just ran smoothly – a huge feat considering he was the only GM! I have to give another shout out to all the Infinity players, they were a great group, everyone was mature and good natured enough that at one point the TO was able to announce “You all know the game, so just play and solve your own problems”. And we did- and it was great. 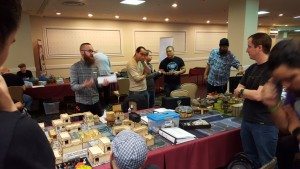 JT Gives a per round mission briefing

Second, here are some of the tables we played on; the terrain was perfect- not too heavy, not too light. And if the players didn’t like it there was a huge box they could pull extra pieces of scatter terrain from and make something they felt was more suitable: 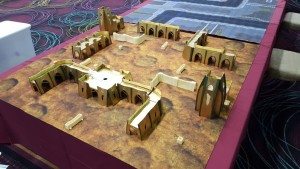 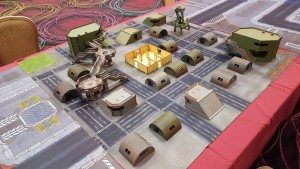 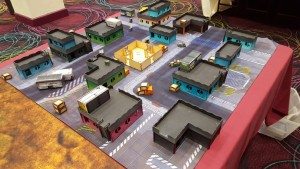 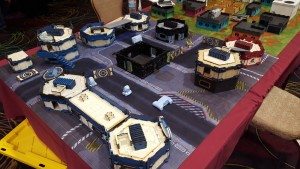 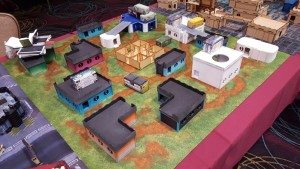 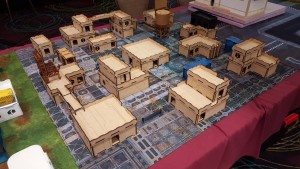 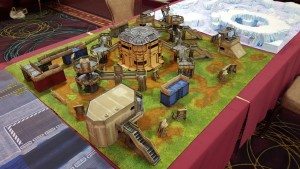 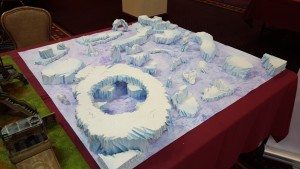 As you can see the tables looked great with a number of manufacturers’ mdf terrain, and putting them on top of FAT Mats made things look really sharp.

I brought my Steel Phalanx (or as JT called them “The Steel Phallus”) and finished about middle of the pack. Two other players brought Steel Phalanx as well; one finished first, the other finished near the bottom. Other armies were similarly distributed. This tells me that no one army was overwhelmingly powerful and player skill was the determining factor. 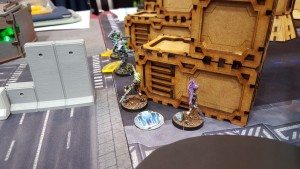 Speaking of player skill, there was some extremely competitive games being played, but everyone remained laid back and cordial. Before, after, and during the games I got to talk, laugh, and lament dice rolls. Everyone I met there had a positive attitude regardless of if they were winning or losing and people were focusing more on having a good time and being fair than crushing their opponents. Tournament rounds were lengthy enough that everyone had time to finish and get to know one another better beyond the game.

My friends who threw down in the championship found it was easier to lug their armies, books, and support equipment on carts or small dollies- It was smart, it saved them a lot of hassle and heavy lifting. But what was even smarter was carrying my whole army + book around in a small container that weighed only a few pounds. I could put everything on the table while setting up, or put everything on a chair during the game. It also left room in the car trunk for a new FAT Mat and tons of other stuff I picked up there! (Seriously, between the VIP swag bag and the oodles of prize support I came home with way more than I expected) 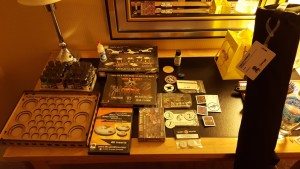 Don’t tell my wife- Not all of these were tournament winnings.

Finally, while technically I had less table time than the people playing 40k, I found that I was “on” much more. 40k allows you to sit back at times and just survey the situation unlike Infinity where I am working with my opponent and constantly scouting for AROs. So I walked away from the table just as, if not more frazzled as if I had played 40k for longer. I guess you can’t have it all right?

Regardless of where you finished, I think everyone who played Infinity at LVO was a winner. Prize support was deep enough that everyone got to take something of value home. Everyone got along. People had a lot of fun. If nothing changed from this year to next I would be satisfied. But I do think if some simpler missions were picked (seriously Corvus Belli, Beacon Land needs some rewriting) and hobby scoring was included (we had way too many bare metal minis) we could make this one of, if not THE premier Infinity event in the country.