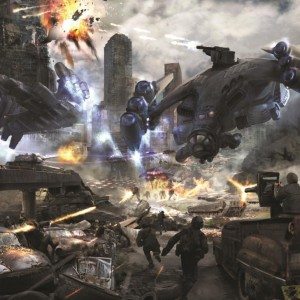 We were playing the Intel mission at 1500pts and a 6 battle-group cap. Note, while we typically play DzC on the official DzC F.A.T. Mat, Urban Zone, we decided to mix it up this time and play on Urban Combat 2! 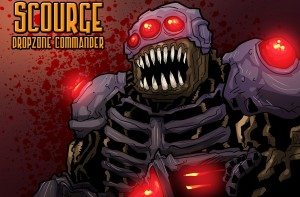 TinBane’s Scourge army was pretty nasty! It featured speed and hitting power combined with a high level commander (lv4) which meant I would be on the defensive almost assuredly as his army packs far more punch than mine. However, TinBane also lacked as many Infantry assets as my list featured, so would be at the disadvantage in regards to finding Intel. 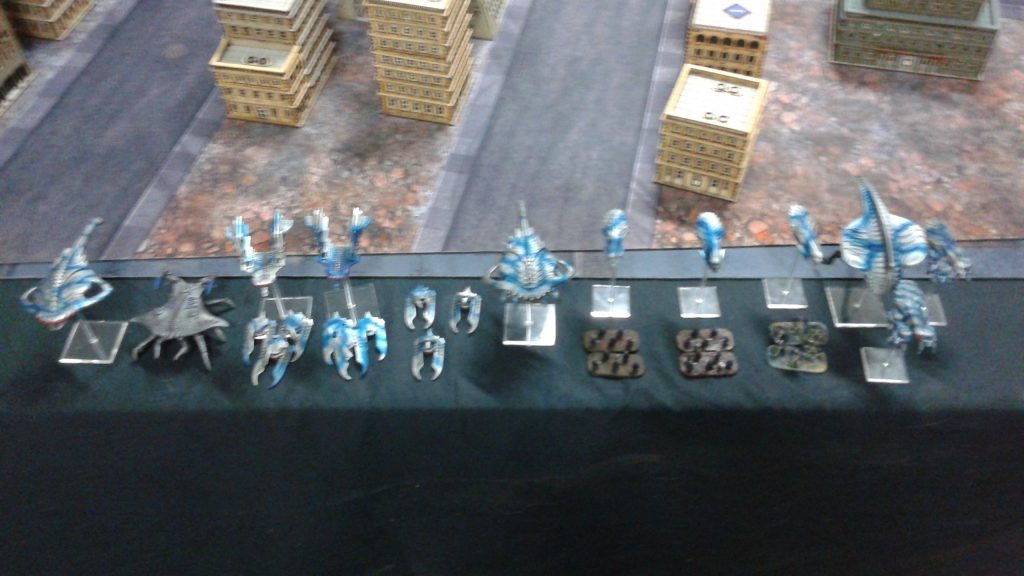 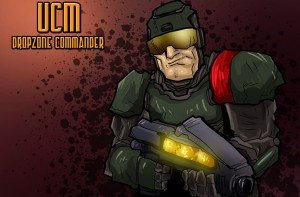 I play a very cagey UCM army that is quite a bit different than your “normal” DzC army. I forgo putting any points into my commander and just expect to always lose the roll for initiative. UCM cards are by far the weakest in the game so I don’t care if I have any in my hand, and much of my army simply stays out of LoS, so losing the roll to choose who goes first is usually no big deal for me. Saving the points gives me more units which I find is often a superior strategy.

I also try to avoid taking Drop Ships wherever possible as mine don’t provide much support once the game is underway as other faction’s do. Again, shaving these points allows me to field more units in my army that have a larger impact.

Lastly, I take a LOT of Special Ops units as they give me a big advantage in the objective game. While 2 bases of Praetorians may struggle with 2 bases of Destroyers or Sirens, 3 bases will mince anything in the game in CQB baring crazy bad dice. The Snipers also allow me to keep infantry form going to the wall, more AA, and another Scout unit. 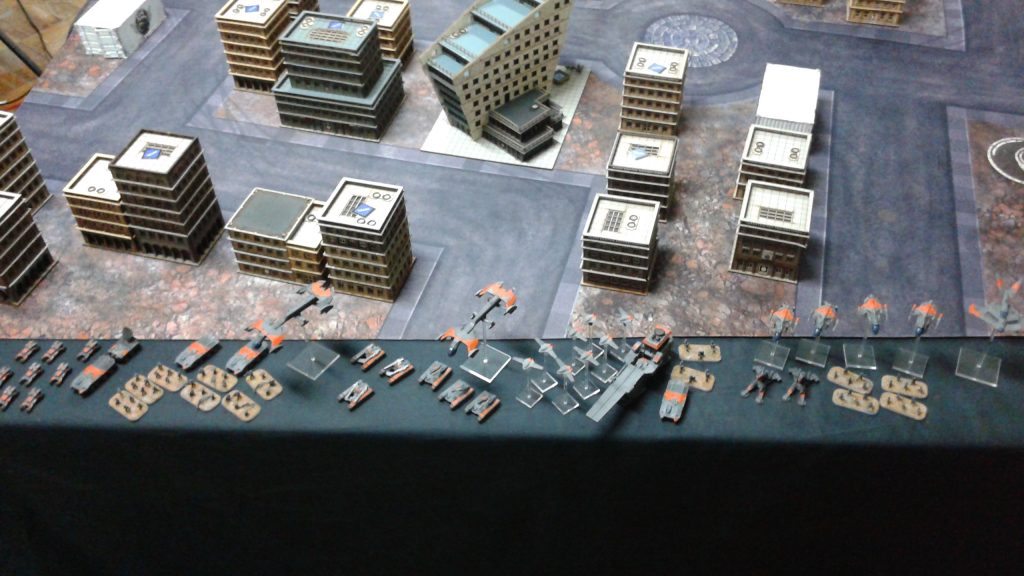 So the stage was set! We rolled off, TinBane took the initiative (as he would the entire game) and away we went. Our opening moves were all about positioning. In Dropzone Commander you have a few big questions to ask yourself. The first is: what turn will I drop my forces? In this game, you cannot shoot in most cases the turn you get out of your drop ship. So, you lose a turn of offense if you stay in your ships and go for a turn 2 drop. However, you gain board position which can win the mission but it could also leave you vulnerable to your opponent who may already be in position to strike at you. 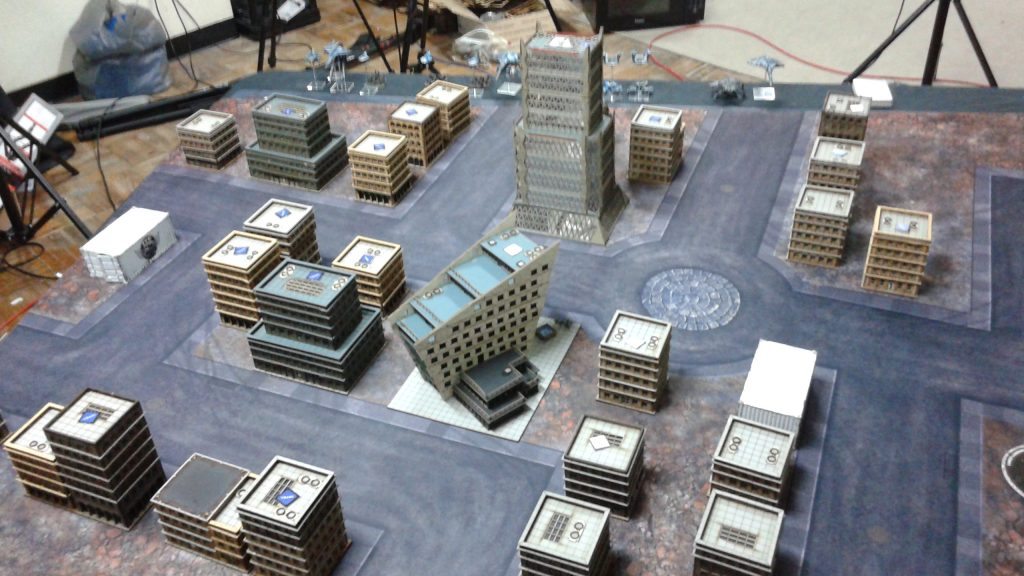 Calm before the storm.

The second important question you have to ask yourself is: which objectives will you focus on? Typically you can’t get them all, so mentally you need to choose which objectives you will focus on and which you will try to deny to your opponent. If you works this out well on turn 0, you can often set up a victory before any dice are rolled.

As I had the advantage in the ability to seize Intel (only infantry models can enter buildings and find the Intel) I wanted to focus on that strength. If I could get more infantry grabbing Intel than TinBane, I would win the mission. I also wanted to hinder his ability to do the same to really double down on that strategy. 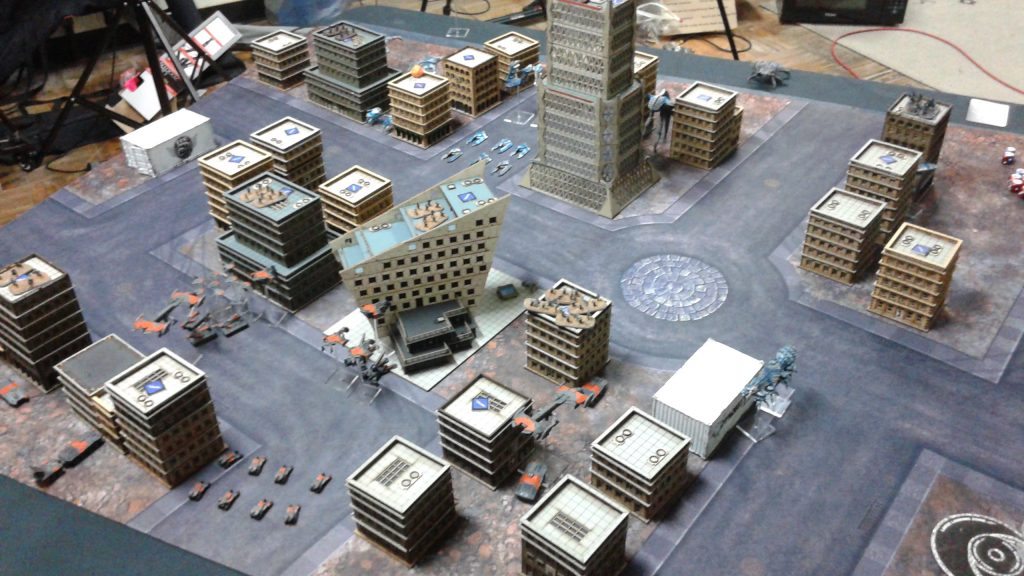 So, I went straight for all the Intel I could, using my least mobile infantry to grab the closest and my most mobile to reach as far forward as possible.  I took a risk with my Praetorians and decided to play them aggressively, going for a turn 2 or 3 drop in TinBane’s backfield where they could engage his infantry in CQB and destroy them or simply deny the area, disrupting his plans. My armor all deployed very defensively as TinBane was almost certain to win the initiative roll again the next turn. I didn’t want to give him any easy kills early on. I’d have to be wary of his Annihilator though, that thing is a beast! With it’s high powered indirect fire capability, I’d have to be very careful as I would be unable to stay hidden for long.

Lastly, I focused on trying to destroy one of his buildings with Intel in it before he could grab it, possibly denying him a game winning objective. As many of my armored units drive onto the table, they can start shooting turn 1! I find this to be very useful as while I lose board position, I can get a head start on taking objectives away form my opponent, which ended up being a very important part of the game. UCM don’t have a lot of dedicated demo weapons, but they tend to have a lot of shots which can be better if your dice are hot. 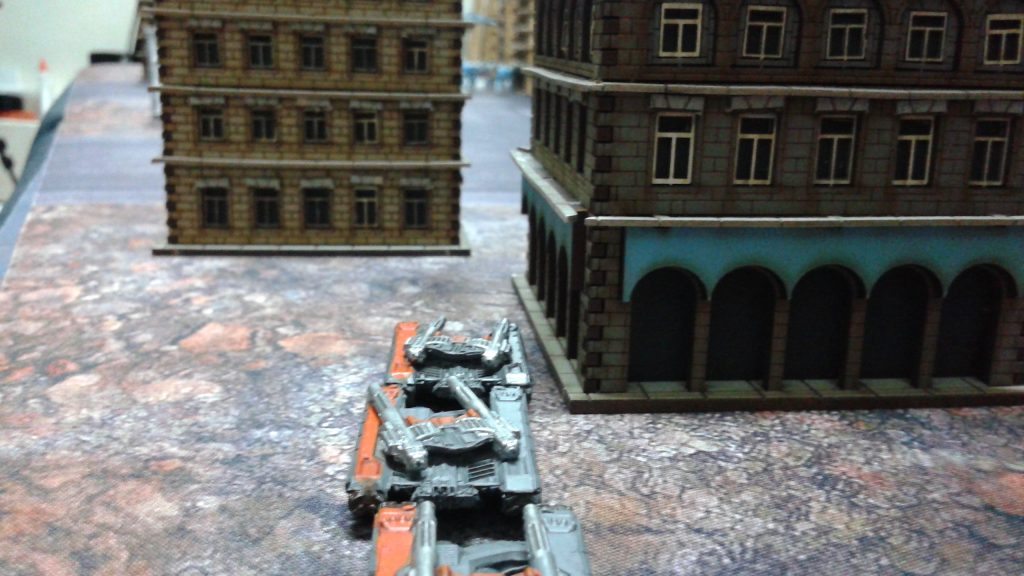 TinBane played it straight: attack! He sent his armored forces up my left flank, the Prowlers down the right, and sent his infantry into the buildings nearest his table edge to go for some lucky Intel right out the gates. Scourge are an aggressive army and if you like playing that style game, you will enjoy them! They put SO many threats on the enemy right away, it really can be hard to keep your cool in the face of that pressure. It was just a matter of time before they would be in my lines where their superior firepower would make short work of my relatively light army. 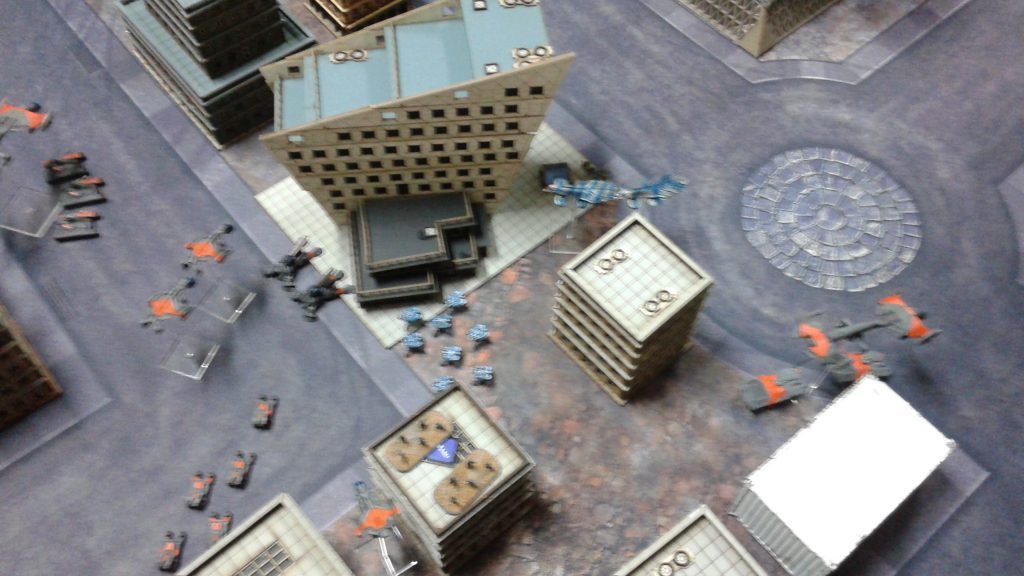 TinBane’s Prowlers were a big threat to my lines. Those little buggers are lightly armored but pack a wallop! He knew how deadly my Longbow artillery were, so he made them a high priority. I countered with my Wolverines to move block the Prowlers and hopefully finish them off with a volley of Rockets supported by a laser strike from an orbiting satellite, called down by my command Kodiak. However, luck was with the Prowlers and my ice cold dice left half of them alive…doh! The Wolverines were going to take it on the chin next round. 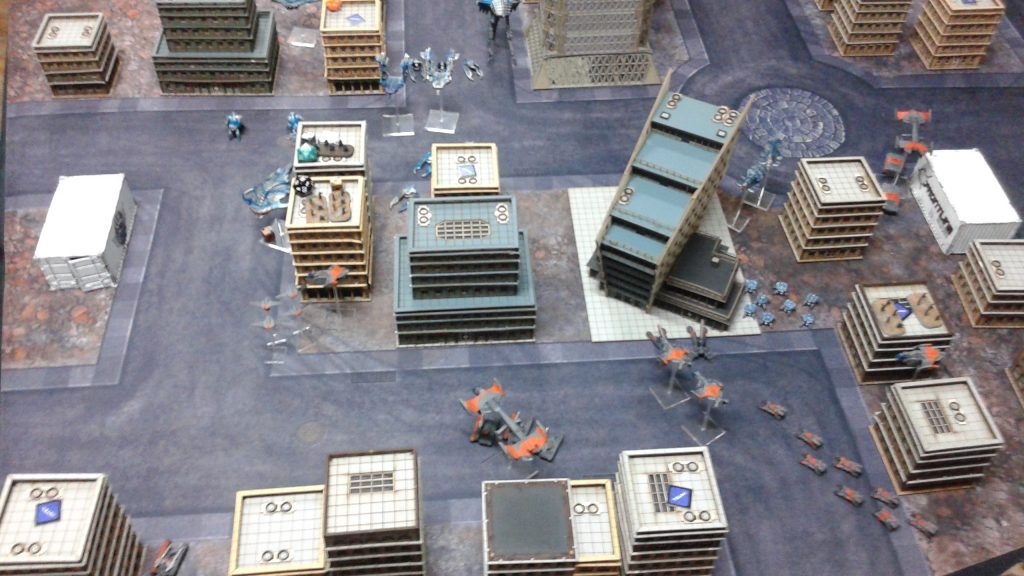 Knowing that the clock was ticking and I needed to stop those deadly Hunter skimmer tanks from blowing away my army and/or dropping my key buildings with Objectives, I had to try and take them out ASAP. A trick I’ve learned vs. Skimmers in DzC is to use blast weapons on them. Skimmers get a defensive bonus for their speed which makes them very hard to hit. Blast weapons get around this though as they scatter on a miss and can still impact skimmers, particularly when they’re close to one another. My Longbow artillery did exactly this and smoked several Hunters before they could threaten me, which relieved quite a bit of pressure.

I also took a gamble and tried to destroy TinBane’s Harbinger Drop Ship ferrying his brutally powerful commander into my lines. However, the little Drones weren’t up to the task and the interceptor fire form the Ravagers destroyed half of them before they could fire. As the Drones have combined fire, I need numbers to hurt a big beast like a Harbinger, which didn’t happen, leaving it only lightly damaged. That was big trouble because as soon as that bad boy touched down in my lines, carnage would follow close behind! 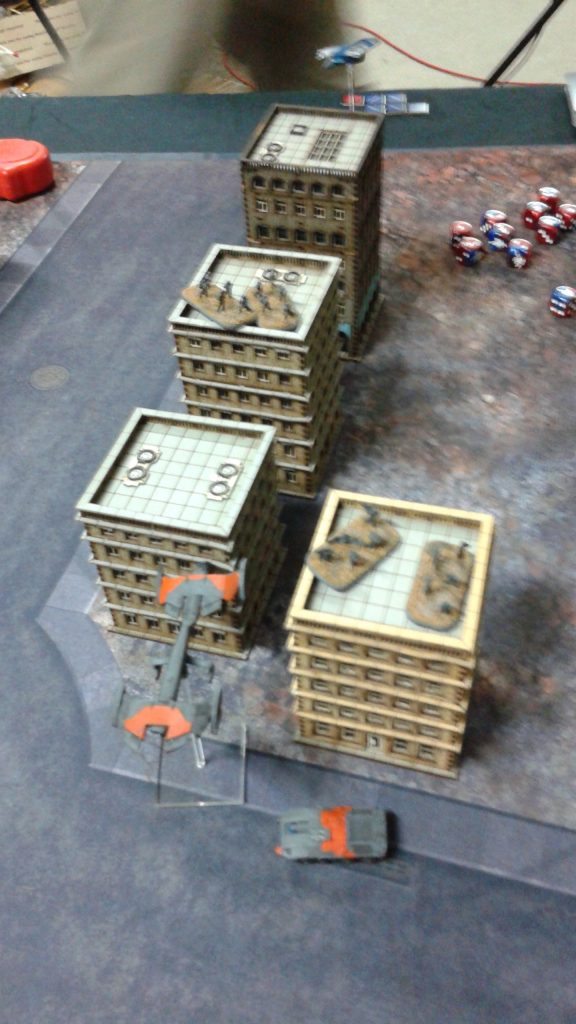 I’d been steadily picking up Intil with my more numerous infantry than TinBane was able to manage. However, a stroke of luck came TinBane’s way when I rolled two 1’s on some of my Intel objectives (they were booby trapped, dang it!) and he rolled a 6 on one of his, which mean it was also an Objective, worth 2 more points if he could get it off of the table, which he did in short order. Damn! Now my comfortable lead had turned into a deficit in the span of a roll of some dice.

However, that meant one of TinBane’s best infantry units had to leave the table (Destroyers) leaving his flank exposed. I sent my special forces in to both secure any remaining Intel and to force him to withdraw his Infantry in that area as they stood zero chance vs. the elite Praetorians in CQB. This gave me a big board positioning advantage. It forced TinBane to come into the middle of the table to grab more Intel, where my infantry were already in position and could enter into CQB with his forces if I needed to slow him down. 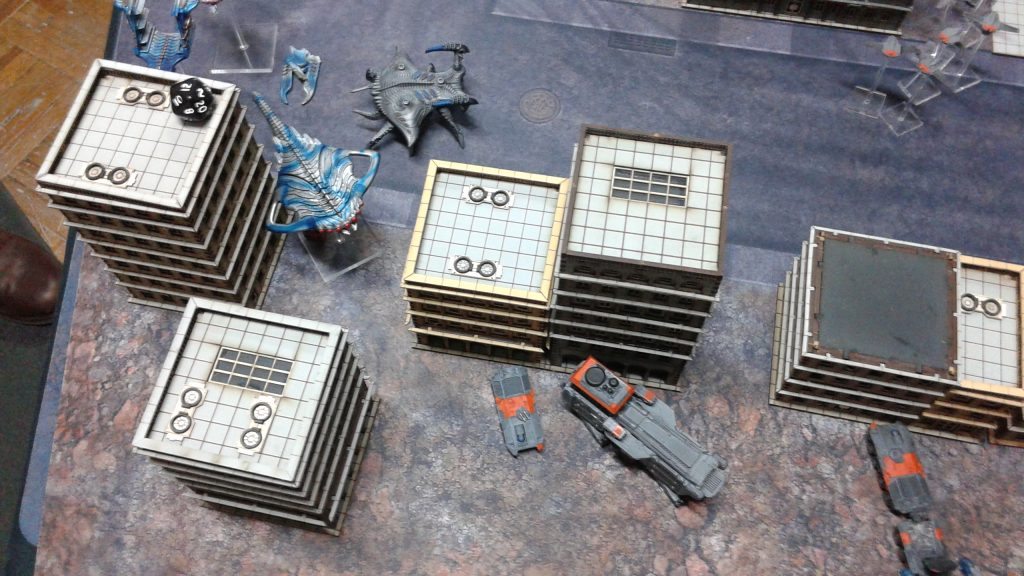 While I was winning the infantry battle, TinBane was gearing up to smash me in the open battlefield! His lucky Prowlers had kept my Wolverines busy, and his Annihilator had finished off my Longbows, one of my best assets. Even worse, his giant Oppressor had touched down near my squishy command and support units and had begun to smash its way through my lines! My Katanas didn’t last long in the face of that and the Hunters but before they were destroyed, they were able to drop the weakened building in TinBane’s half of the table I’d been blasting since turn 1 which would deny him a critical chance at Intel. It was just a matter of time before my army collapsed. I had to win the Intel race, soon! 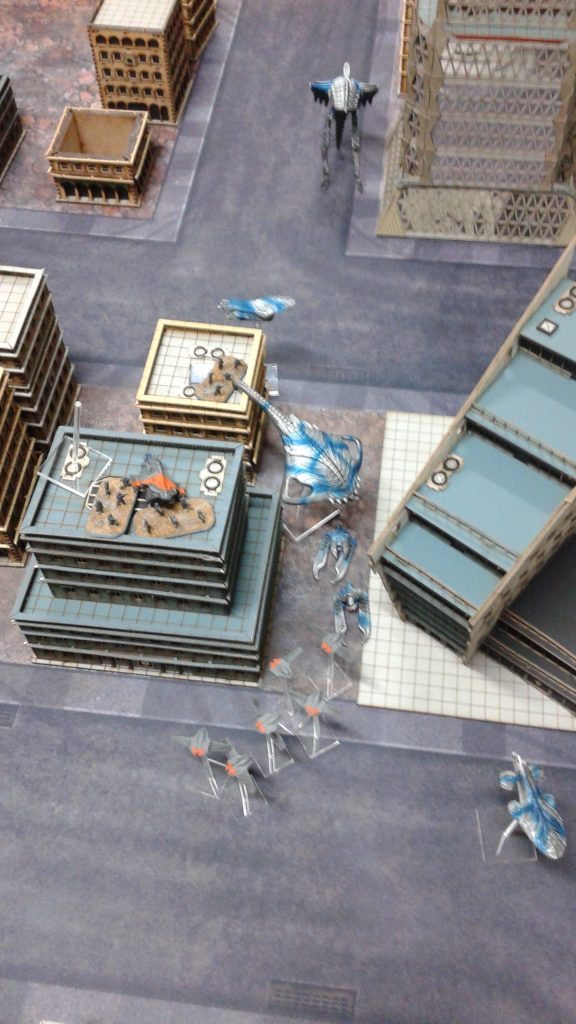 The hammer begins to fall!

As my lines were getting overrun, I had managed to pull ahead again on Intel points! TinBane went for one last surge into a central building but my Infantry were in position to counter and fight them in a brutal CQB. I had managed to weaken TinBane’s Warriors first by firing into the building they occupied, and so the fight went my way as my humble Legionnaires were able to kill the Warriors before they could snag the Intel! That was critical.

The game was winding down to just 2 pieces of Intel left, and only 1 of which TinBane could actually get. He desperately threw his last unit of Warriors into the building, hoping for a lucky 6, turning the Intel into an Objective and potentially winning him the game! I fired every piece of ordnance I had at the building but wasn’t able to destroy it. TinBane thought he’d escaped certain doom but, to his dismay, my Seraphim had finally passed its availability roll (bringing it in from reserves)! I lined up an attack run on the building his Warriors were in, with the last piece of Intel he’d be able to get and fired a Bunker Buster missile into the building, destroying it and crushing the Warriors and Intel inside, sealing the victory for the UCM! 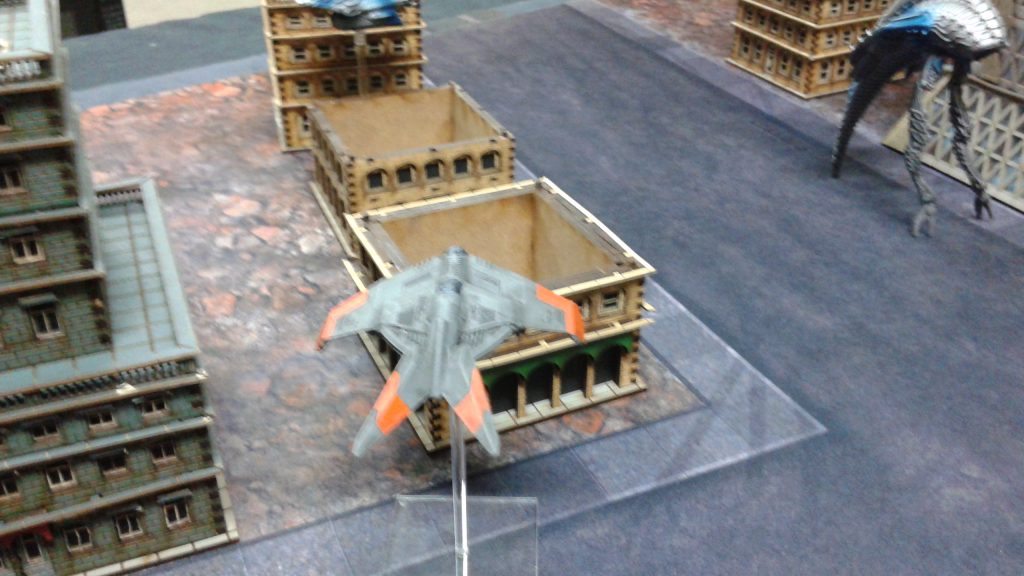 And that was that! TinBane couldn’t possibly win the game and we shook hands after a great game. Despite getting fairly well drubbed in the actual fight, my army focused on winning the mission, which it does quite well. UCM units are not spectacular on paper, but you typically outnumber your opponent and they are versatile. Many units can perform multiple functions where other armies lack that level of adaptability. I have found in DzC that you don’t always have to be able to outfight your opponent to win games, which adds a lot of tactical depth to what is already a great game.

If you haven’t given DzC a try yet, I recommend it! It is extremely balanced, the miniatures are gorgeous and the game plays quickly.Big thanks to TinBane for the awesome game and for coming all the way from Australia to attend the LVO and hang out with us at Frontline Gaming.

Posted on February 17, 2016 by Reecius in Battle Report, Dropzone Commander