So Long Centstar and Thanks For All The Fish!

You are here: Home › 40K › Las Vegas Open › Tournament report › So Long Centstar and Thanks For All The Fish!

So if you’ve been reading me by now, you should know that I give the good and the bad, the glory and failures, and LVO this year was a down and out failure for me on many levels. Good oppoents but bad luck, the return of the U, and wifey miscommunication expectations. So here it is, the LVO Captain A report. 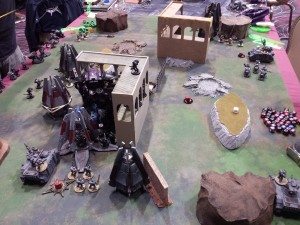 So for his powers he rolled some of the best for this matchup. Three Tyrants had Psychic Scream and one had Warp Blast if I remember right. Tons of ap2. I had him go first as I didn’t get Perfect Timing and couldn’t really alpha strike his list. He flew off the table and I dropped one squad of purifiers to wipe out the Venomthrope and get on his objective. Essentially I was still in it, getting my Dreadknights whittled down a wound or two at a time. Trying to get up on Maelstrom, but rolled Maelstrom 6 four out of six turns! Blech. I hate Maelstrom six. I also forgot the Lictor Mawloc combo, which took out Sevrin Loth, losing me Invisibility. I made some gambits at the end to bring things out, but just couldn’t do it. Great game and nice opponent but a loss.

So this game I dropped a unit of Purifiers in and took out both speeders, hit the Shrouding speeder pretty hard and I think even put a wound on the superfriends. Then I got a little greedy, gating over the star into shooting range without invisibility and drifted 11 inches toward his deathstar. His turn one saw my deathstar go poof when Draigo failed a ton of wounds in the first volley. The rest of the game saw me putting on a good face and going for moral vicotries and trying to make a game of it but no dice. Round 2 loss.

So here I thought I had a good shot as all I had to do was isolate and destroy, but things turned sour quick. In turn two I think his chaos knight went 12 Inches through terrain, went 12 inches on his charge and rolled two 6’s for his D-Weapon. Okay, all draigo needs to do is look out sir one of those and not roll……..oh that’s a one isn’t it? Bye bye Draigo and the Stars chances. Good times. I called it there as I had really no tools to take on the rest of his list and the luck had me down man.

So with that and going 0-3 the first day I dropped out. Captain Drop It Like Its Hot! 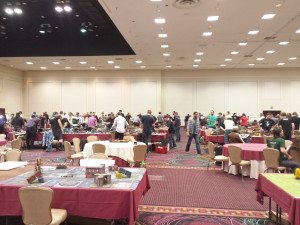 Another big thing is that I was sick of my list. I have been playing it for almost two years and that is very hard for my ADD brain. I was so tired of playing my Centstar and it showed. It is a high risk high reward list. Last year saw my luck go well and this year my luck ran out. Se la vie.

I also know that you really need an army that has a good chance to win every aspect of the ITC missions. Primary, Secondary, and Tertiary. Right now I’m putting together my War Convocation that I think will hit a lot of those marks and am also gearing up to build a Corsairs/Eldar/Dark Eldar list that I’ve had in mind for a while.

Last is that I don’t know I have what it takes, especially with everything going on, to compete at the level that a lot of these guys do. I have to play for me and my personal goals and if that isn’t enough, I don’t know what. I’ve thought about the Narrative events or even an ITC lite type of event, but things are not solidified right now. 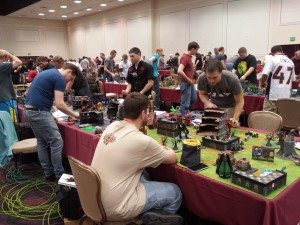 So I have to be honest with you in that I don’t really like Vegas. Sorry! It comes off as a very fake place. My wife loves to walk all round and see stuff, but that isn’t what I really want to do. We had some miscommunications about that and lead to more fun times. Yay!

So with all that complaining done, I still had an ok time. I got to hand out with a lot of 40k friends and ate some great food and have some fun. If I go next year, I need to come up with a better plan for my time and figure out what I want to do to have fun for me. We will see.

For the review of the LVO side of things, I was greatly impressed with the organization and setup at this year’s LVO. The banners they had were sick and made it easy to see where things were. The vendors had nice setups and some great product and I heard the classes were top notch. A couple of things I didn’t like was the setup of the 40k tables as about 100 tables were setup one way and the other 50ish were in a different part of the venue across the hall. Very confusing in my opinion. I understand the thought behind it, that they wanted the top tables by the judges table, but there had to be a better way to go about it. The other issue was water as in there wasn’t any. Per regulations by Bally’s we couldn’t bring in our own water or beverages and the only water that one could buy was the $5 10 oz water bottle that could be refilled in the bathroom. It was hard. They know this but it needs to be stated for transparency. I would say the tables was a small thing, but the water was pretty big and needs to be figured out for next year.

So there is my tale of travesty and woe at the LVO!

45 Responses to “So Long Centstar and Thanks For All The Fish!”