Happy Saturday everyone and welcome to day 2 of the 2016 Las Vegas Open. Petey Pab here with all your 40k Championship news coverage needs.

Tune into our twitch channel for our top 8 announcement and closing statements! http://www.twitch.tv/frontlinegaming_tv

Edit Saturday day 2 6:30pm Round 6 Update. Hey guys! Petey Pab here bringing you analysis on the top 8 tables. The round is almost over and pretty soon we will have our top 8 players heading into day 3. Alright guys day 2 is a wrap! Winners are in Bold

Table 1: Steve Sisk (Special Razorback Blue Scars BC) vs. Anthony D’omore (Pod Battle Company, Skyhammer?, Coteaz) Unfortunately I was unable to look at Anthony’s list so I am sorry if I got it wrong. A battle company match with two completely different styles of play. Both lists look like they hit hard, Sisk’s list seems more mobile due to Anthony’s abundance of pods but who knows? He didn’t make it to the top table for nothing. [Edge; Steve Sisk]            Winner: Steve Sisk 7-5

Table 4: Alexander Fennell (The Pink Decurion, Destroyer Cult, Royal Court, C. Harvest) vs. Thomas Ogden (Riptidewing, CAD w/2x Stormsurges) Alex Fennell is a class act, and knows how to play the game of 40k while also having a good time with his opponent. He is running a resilient list and it’s up to Thomas’ stormsurges to save the day because it doesn’t really look like Alex has the firepower to be able to kill them both. [Edge; Alex Fennell]               Winner: Alexander Fennell 11-2

Edit Saturday day 2 3pm Round 5 update. For Round 5 we have Geoff “Incontrol” (Twitch) Robinson versus one of the nicest players I have met so far Patrick Mcaneeny and his battle company. Geoff certainly knows his way around this matchup and Patrick is in for a real tough fight because Incontrol needs to score as many points as he can in his final two games. The gloves are off and can Patrick pull off what would be Incontrol’s second upset loss of the tournament? We will see, lists below. Update: Geoff Wins 7-4, this low point win solidifies Geoff’s place at the top of his category (Allies of the Imperium) for the ITC however he no longer has a legitimate shot at making a top 8 appearance except as an alternate.

Edit Saturday Day 2 2pm  Round 4 update. We had a lot of intense games in round 4 including a PjPants winning a nail biter against Kurt Claussvand his Eldar. Keep in touch for round 6 and my day 2 recap where I will discuss key highlights for day 2, Top 8 players and lists, and a meta breakdown of the armies that appeared in the LVO.

Edit Saturday Day 2 10am  Round 4 update. Our featured match today is going to be the number 4 ranked ITC player Steve Sisk and his white scars battle company versus our 27th ranked player Ben Cromwell who is fresh off of knocking our 10th ranked ITC player Wesley Pauley. Ben is running a War Convocation with two imperial knights (Yes it’s possible). Head over to our twitch stream http://www.twitch.tv/frontlinegaming_tv for the live match, lists will be posted soon.

We have the lists of both players!

Edit: Saturday Day 2 9am Welcome everyone to the day 2 LVO coverage, people are slowly seeping into the hall and there is a lot less chaos then yesterday because people knew ahead of time who they were paired up against due to this amazing website http://bcp.modelingforadvantage.com/event/lvo2016. The guys running the matchmaking software app for us got us this website for live updates pairings for the all the players. Your top 40 best players are all playing on tables 1-20. So hit that ctrl-f command, grab a seat, and get ready for a wild day 2. Rounds 4-6 are where all the best matches and drama happen, stay tuned and I will keep you all as up to date as I can. 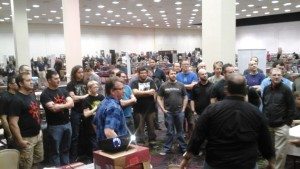 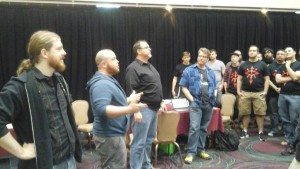 The 40k Narratives event is in full swing!