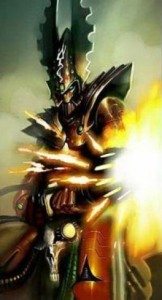 Welcome back to another fun filled Eldar Review brought to you by the ever lovely Goatboy.  I have another Living Legend to talk about this time – the one and only Fuegan – Phoenix Lord of the Fire Dragons.  Once one of the more deadly Phoenix lords, he is still a mighty warrior for your Pointy eared space elf armies in his current incarnation.

I know when we first had the grumblings of 6th edition – Fuegan broke a lot of rules.  He used to act like an MC as he had Smash, Armor Bane and a host of other rules that while fitting for what he needed to do – didn’t really work well with the new edition of the game.  Thankfully they cleaned up his rule set and while he isn’t nearly as amazing as some of the other glue like Phoenix lords he does do his job very well – which is blow the heck out of Vehicles.

Basically Fuegan is a super Fire Dragon.  He has all of the abilities of that unit mixed with a tougher body, stronger weapons, and a whole lot of desire to blow things up.  He is a pretty rough melee character to deal with as he has an extra point of Strength and a decent amount of attacks.  He does get more attacks as he gets hurt but since he only has 3 wounds at most you are looking at 7 attacks on the charge unless you have a way to heal him through the Runes of Battle psychic powers or some other, similar ability.  Not terrible but not nearly enough to run rough all over the battlefield.  I think if Imperial Knights were more of a problem for the Eldar he might see play as he can single handily rip apart multiple knights if given the chance. 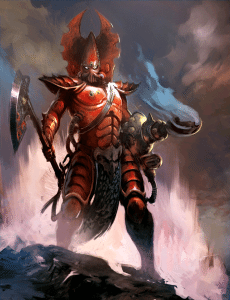 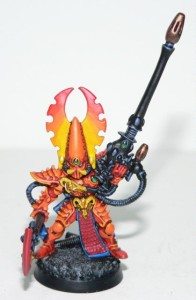 This character isn’t bad and in a lot of other armies he would fit right in.  Heck, if a Salamander Captain had all these rules he might actually see some play as he would be fluffy and pretty gnarly versus those pesky Imperial Knights.  For the Eldar army he doesn’t really fit in that well.  They have a plethora of anti vehicle options that are cheaper and better suited for the landscape that is competitive 40k.  Most of the time in an HQ slot you want a force multiplier and this guy is really more of a blunt fist of doom set up to punch his way through any vehicle, building, and walker you might see.  It would be interesting if he had Tank Hunter as well as Armorbane, as he could be a good add on to other shooting units. As is though, he still wrecks most vehicles.

In fact it’s his lack of unit giving USR’s that makes him stay in the army case, for my money.  This game is all about what you can combo together and he just doesn’t give enough to help you out.  He costs a lot, takes up an HQ slot, and just doesn’t give enough into today’s sharing age of super characters/units.  Though he is pretty fun to man a gun on a fortification.  I remember when that used to be a thing when flyers were wrecking everyone’s game.

I have the feeling a lot of HQ’s fall into the same sort of “trap” we have with some of the Phoenix lords.  In a straight up fight they should kick the crap out of most “champions” they might come up against.  Sure there are some crazy super characters the survive through the hail of bullets, lasers, and what constitutes a D attack – but unless they have some sort of trick they have or can grant to a unit it becomes hard to truly fit this option in a “non fluffy” competitive list.

I feel there was a missing formation that either had all of these Phoenix lords in a big old Court of kickassdom or at least added on to any form of the Aspect Host that picked all 3 of the same Aspect.  Heck I think that would have been a cool option.  It probably shouldn’t be free as adding in mean HQ options is a little much but at least they should have been able to be taken.  This could have been a way to give something neat and fluffy to the army and maybe give a bit of a tax to the pretty strong Aspect Host formation.

Overall while his skills and powers makes him an individually strong Phoenix lord – his lack of army benefits mixed with less then stellar movement tricks means he is just not nearly as awesome as some of the other “weaker” HQ options.  It gets kinda frustrating when the main reason you want an HQ is to get something other then a bad ass beatstick. He will not dissapoint you as he hits like a brick shit house, but when compared to say, the humble Farseer, he starts to feel a lot less appealing.

My problem with Fuegan is that he’s essentially 210pts for a single Meltagun. You can basically buy TWO squads of Fire Dragons for the same price as him, and he really doesn’t bring very much to the table beyond what a simple Exarch has. He’s got an axe, sure. It makes him vaguely scary to guys that don’t have an AP2 weapon in melee, but he’ll get his teeth kicked in by anyone competent.

I like HQs that are good at shooting. The fact that I dislike Fuegan even despite this is a pretty big indictment of him.

All of the Phoenix Lors fall into this trap. They’re all super cool, they all are good, but none of them are all stars.

Well, some of them less so than others- Karandras can at least Outflank with a unit and give them Stealth, and his S8 AP2 weapon at initiative has some notable advantages over a standard Exarch. Jain Zar actually does something completely unique with her WS/I penalties when charging a unit, and Baharroth brings HnR to the table. None of them are amazing, but they at least serve potential functions in an army.

Fuegan really is _just_ a meltagun. He doesn’t do anything special at all.

If you were able to run with his buffing ability as he gets hurt and then heal wounds back on to him, that would be nifty, and he’s OK in melee. But yeah, some are better than others, lol.

I enjoy Maugan Ra quite a bit, but wouldn’t make the case for him being an all star or anything.