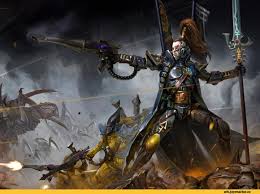 There aren’t too many clearly bad choices in the Eldar Codex but there is at least one.  His name is Prince Yriel of Craftworld Iyanden.  Games Workshop has made Prince Yriel a close combat specialist who is pretty much guaranteed to die in close combat against anything other than basic infantry.  For more reviews and tactics articles make sure to check out Frontline Gaming’s Tactics Corner.

Prince Yriel is basically an Autarch but with worse Wargear, no options, one more wound, one higher initiative (7) and one higher WS/BS. (7).  You get all this for exactly double the price of a base Autarch.    Unless you have fluff purposes in mind or just think the model is cool, leave the Prince on the shelf. 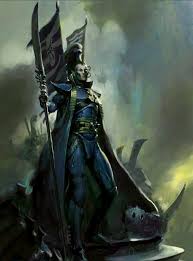 Prince Yriel also has no shooting weapon so he is locked in to his base 4 attacks (the same as any Autarch that takes a close combat weapon) and his extra BS can only be used to toss a plasma grenade. 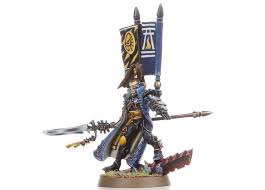 Prince Yriel has all the same special rules as an Autarch.  He has the universal special rules of Independent Character and Fleet.  His also has the Eldar special rules of Ancient doom (hatred Slaanesh -1 on fear checks caused by Slaanesh) and Battle Focus (run then shoot or shoot than run).  He won’t get much use out of Battle Focus but at least he won’t take it away if he joins a squad that can benefit from Battle Focus.  Finally, He has the Autarch special rule The Path of Command.  The Path of Command you can choose to modify each reserve roll you make by +1 or -1.  That is a really good rule as manipulating reserves can be the key to wining and losing against certain armies.  Prince Yriel can be taken as a choice from the  Hero of the Craftworlds command formation as part of an Eldar War Host formation.  If you do so Prince Yriel will gain Matchless Agility  special rule meaning he will always run 6″ which is decent.

Prince Yriel also has the preset Warlord trait of Ambush of Blades.  With Ambush of Blades once per game during either the assault or shooting phase, all friendly Eldar units within 12″ of Prince Yriel re-roll failed to hit rolls of 1 until the end of the phase.  That’s good but not amazing as it has a limited range and is one use only. 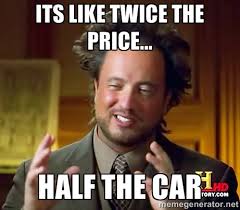 Why is he Terrible?

Prince Yriel  is a 4 wound toughness 3 model with either a 3+ save or a 4+ save without eternal warrior.  That’s a problem.  He will either be on foot or have to jump out of a transport making him vulnerable to the huge amount of S6 shooting in 40k games these days.  He is a close combat specialist that can’t cut through 2+ saves and his weapon makes him even more vulnerable to Instant Death.  Prince Yriel’s Warlord trait army buff has limited range and is one use only meaning it won’t be much of a factor and there are better warlord traits on the Eldar and basic rule book tables.

Finally,  Prince Yriel price cannot be justified when compared to a kitted out Autarch.  An Autarch on a Jet Bike with a Banshee Mask and the Shard of Anaris costs 10 points less than Prince Yriel.  That Autarch can move up to 48″ a turn, has the same number of attacks, gives you the same reserve manipulation, has haywire grenades, and is more survivable with Toughness 4 and without re-rolling saves of 6.  Pretty much a better choice everyday and twice on Sunday. His Eye of Wrath can be good, and he can do work in melee against the right targets (when he finishes off a wounded GMC with his Fleshbane attacks, you’ll be stoked!) but outside of a meta where you know who you will be playing in advance, he simply isn’t a good choice in a TAC Eldar list and as such, you will rarely–if ever–see him outside of a themed list or when taken for fun in the Heroes of the Craftworld section of an Eldar Warhost.

What do you guys think?  Am I missing something about the Hero of Iyanden?

Yeah, that is one of the very few scenarios where he will be good, lol!

If you are running a foot autarch, then go with Yriel since he kicks but. If not just run an autarch on jetbike

Tournament worthy for sure ?