The unit that folks love to hate only slightly less than the Wraithknight- Windrider Jetbikes. Click to read on, or check out the Tactics Corner for more reviews and strategies.

Anyone with even a passing knowledge of the Eldar codex probably knows about Windriders, if not always by name- previously called Windrider Guardians, Eldar Jetbikes, and probably like six other things, they have been a common troop choice for some time now but with the 7E update they are one of the more broken units in the game, if not without their weaknesses. Any tournament list not prepared to handle bucketfuls of S6 shots is in for a bad time thanks to their presence in the meta. 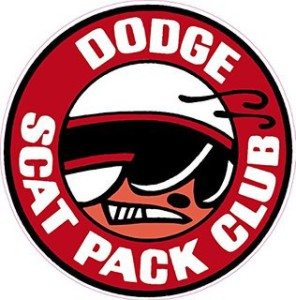 Windriders are standard Eldar mans who have suited up and gotten themselves jetbike rides- this gives them not only +1 Toughness to their standard profile but also a 3+ armor save, both very huge for Eldar who normally have subpar stats in both areas. Like all Eldar they benefit from superior Ballistic Skill and Initiative (4 and 5, respectively) as well as a decent Leadership of 8 in their profile.

Their Eldar Jetbike unit type allows them to move 12″, passing over terrain and models, as well as to Turbo-Boost up to 36″ instead of shooting or move 2d6″ in the assault phase if they didn’t Turbo or declare a charge. These are both pretty huge abilities, as they allow Windriders to maneuver to superior positions almost at will as well as to cross the board for purposes of scoring objectives and avoiding melee threats, not to mention scooting in and out of Line of Sight of the enemy to snipe away while remaining safe. 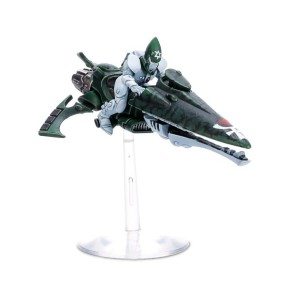 Like all Eldar they come with Ancient Doom, which provides some bonuses and penalties while in melee combat with Slaaneshi models- though you’re not likely to see that happen terribly often. They also have Battle Focus, which they cannot use due to being unable to Run. Good times!

Windriders are available as a troop to normal Eldar lists and are available as part of the core formation of the Windrider Host in an Eldar Craftworld Warhost, though the actual benefits to the formation (beyond simply being able to take a very good unit) are essentially zero.

Each Windrider squad can add a single Warlock (also on a jetbike, natch) to the unit, who is Mastery Level 1 and can roll powers from Runes of Fate and Sanctic Daemonology. He also comes with Rune Armor (4+ invulnerable save) and a Witchblade that can be swapped for a Singing Spear at a token cost. However, with only one wound and Ld8 his 50pt price is rather harsh, so he normally gets left at home.

The other bikes, however, are where the real gold is. They come stock with a twin-linked Shuriken Catapult as part of the bike, which isn’t an awful weapon- two shots, high accuracy, and the potential for AP2 hits thanks to Bladestorm are all nice little features if you’re at point-blank range. However, the much more common sight is to see their gun swapped out for a heavy weapon, which every member of the squad is allowed to do for a pretty minimal cost. Both Scatter Lasers and Shuriken Cannons are available for the same price, which isn’t uncommon across the new Eldar book. 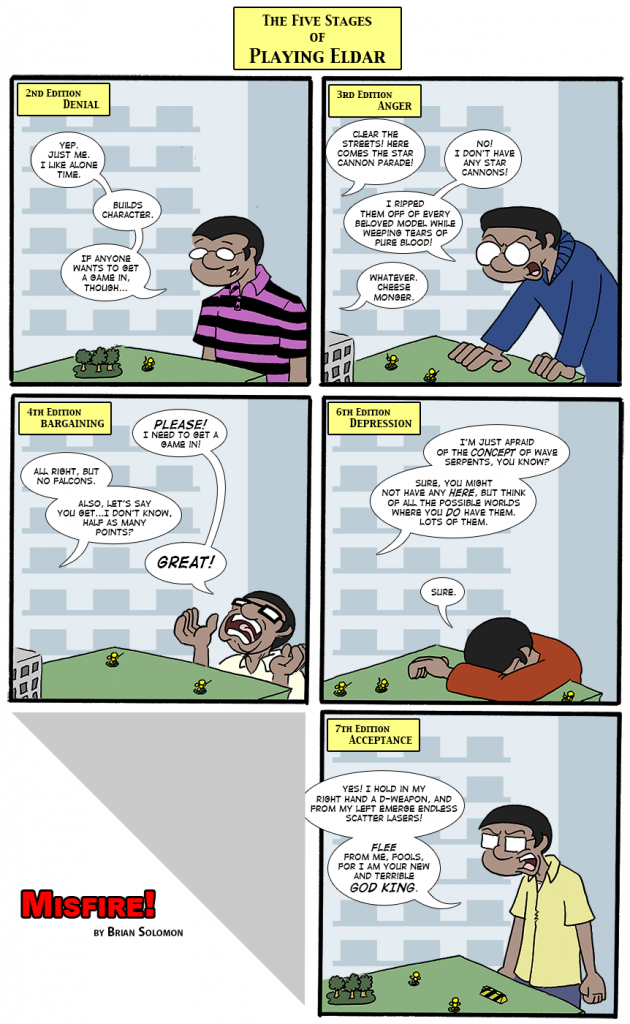 So if you didn’t get it from the above, Windriders are good. As in, environment-defining good. For 27pts per model, you can bring a moderately-survivable (MEQ statline) guy with four S6 AP6 shots out to 36″. Some people argue for the Shuriken Cannon because of its ability to Rend targets, but the extra shot and most especially the extra range on the Scatter Laser make it infinitely-superior in most situations. So equipped, often in squads of three or five, so-called “Scat Packs” can wreak havoc all across the battlefield by using their mobility and firepower to scour enemy units from the table in short order. They excel against infantry of all sorts, but even MCs and vehicles with AV12 or lower are not safe from them- only the very toughest of targets will be able to shrug off their fire.

A minimum Windrider squad will generally take out 2-4 MEQs per volley- this may not seem like an exceptional amount, the unit costs a mere 81pts, whereas the Marines it kills are coming in at probably 45+ pts. In other words, every turn of shooting against typical targets Windriders will take out something like 50% of their own cost- more with poor rolls on the enemy’s part or more opportunistic targets (such as the special/heavy weapons in a squad, etc.)

However, Scat Bikes are not without their weaknesses. Flying targets (especially T6/3+ FMCs and AV12 flyers) will typically be able to weather most of their fire, and with some luck 2+ armor units (especially those with high Toughness) will as well. Moreover unlike the Wave Serpents of yesteryear, Scat Bikes can throw a punch but can’t take one- Jink and 3+ armor will sometimes keep them alive, but it’s hardly reliable; even just a single Boltgun shot can very easily cause a casualty, see you fail Morale, and send the unit skittering off the table. Windriders are really fragile and if you want them to keep in through the course of the game, you need to play very carefully with them. 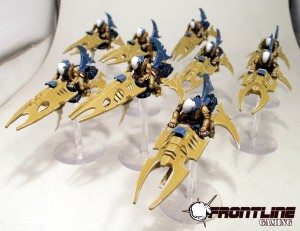 Their Thrust move in the assault phase (as well as ability to ignore terrain) are helpful in this regard, but you still need to be cautious. Keep them near or behind blocking terrain whenever possible; you’ll likely also want to invest into some other forms of protection, such as a Void Shield Generator, psychic powers (Shrouding, Fortune, etc), or even fortifications like the Imperial Bastion that can give them something to hide behind. In less competitive games, the Warlock option can actually be considered for larger (5+) squads as well, since the Primaris power of Runes of Battle will give you Shrouding for the unit and several of the other powers (most notably Jinx) can make the unit significantly more effective.

Their vulnerability to enemy fire is compounded by the Eldar’s general inability to effectively deal with reserve armies- possessing no Interceptor to speak of and with no special abilities to mitigate things, they are entirely at the mercy of the dice when dealing with such forces. Most commonly the strategy is to simply hold one’s own forces in reserve, but even this is a middling solution at best- reserve rolls are inherently unreliable and a balance has to be struck between avoiding leaving units on the field to be hit and keeping enough in play that they aren’t completely wiped out. Windriders are just as susceptible to this sort of issue as other Eldar units, and all the more so because they are (point-for-point) pretty easy to kill even in the best of circumstances.

So the game of playing with Windriders is to make fights as one-sided as possible- hit the enemy hard and often while avoiding leaving your own forces exposed to even the slightest enemy firepower. Of course, this is a game that Eldar in particular and many other armies in general try to play, but with Windriders it is doubly-critical due to the imbalance of their strengths and weaknesses. Many Eldar mirror matches come down to who is getting the first punch in with their jetbikes and who is able to better protect them against the enemy. 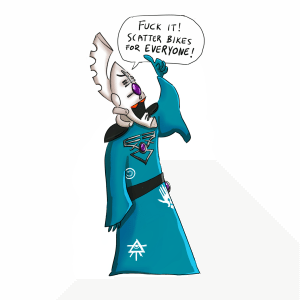 However, all we’ve talked about so far is the Windriders’ ability to shoot and be shot in turn- but that’s only the tip of the iceberg for them. As Troops choices that will virtually always be taken in a Combined Arms or Allied detachment, Windriders will benefit from the Objective Secured rule and can thus “steal” objectives from most other units in the game. They are aided in this by their unprecedented mobility- up to 48″ per turn at full tilt, allowing them to very nearly cross the board in a single turn. Their Jetbike type is also exceptionally relevant here, since it allows them to move over intervening terrain and models- if the objective isn’t completely blocked off within 3″ in all directions, the Windriders have a chance to hop onto it and steal it away.

Strategically what this means for the Eldar army is that they have a very strong incentive to keep the Windriders alive until the end of the game, because it gives them a powerful tool to threaten any objective anywhere on the table with capture. Especially in games like Crusade, Big Guns, and Scouring where there are lots of objectives spread across the board, Eldar are quite capable of taking any or all of them, whereas the enemy is hard-pressed to muster enough Objective Secured units of their own to defend them all. This puts the opposing general in the difficult position of needing to defend enough positions strongly enough that they can ensure that Eldar firepower doesn’t simply kill the defenders and take the objective anyways, but at the same time needing to hold enough objectives to actually win the game. Combined with the attrition they are likely to experience from the Windriders’ shooting over the course of the game, very few armies can manage this balancing act.

This extraordinary mobility also has consequences outside of the end-of-game too, of course- with so many heavy weapons mounted on mobile platforms, Windriders can take good advantage of units that rely on positioning for their survival. This can include units like Imperial Knights with their Ion Shield, but also includes vehicles with disparate armor facings (such as Chimeras or Battlewagons) and units using terrain to benefit from cover saves or protect particular squad members.  And, of course, if they end up facing something they can’t down in a single turn (such as close-range Deep Strikers or the like), they can simply say “nope!” and jet across the table to another, safer place on the board from which to work. Make no mistake- Windriders’ guns are strong, but it is their mobility that makes those guns so effective on the battlefield.

Windriders haven’t “ruined the game” or anything of the sort, but they certainly have been part of the formula that has made Eldar consistently one of the top armies around for quite some time now. If you’re going to a tournament of any size, you can expect to see at least one player fielding 12+ Windriders alongside the other usual suspects for the army- they’re simply too strong to ignore or hope not to run into, and any army that can’t deal with them in short order is in for a really bad time.

Thoughts? Anecdotes? Complaints? Issues? Back-issues? Post ’em in the comments section below, and remember that you can buy Windriders 20% off at the Frontline Store if you feel like winning. Just sayin’.