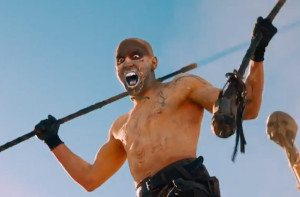 Loopy is back to review those plucky, little go-getters from the Khorne Daemonkin Codex, the Chaos Cultists.

Cultists are ubiquitous in the 40k narrative and, before the 6th Edition Chaos Space Marines codex, had been overlooked by Games Workshop for a long time. Today, they are often an essential feature of most Chaos lists, particularly in Khorne Daemonkin detachments and formations. For the KDK, Cultists can serve as much more than a Troops tax as they bravely score objectives and work to generate the Blood Tithe points your army needs to function at its best. 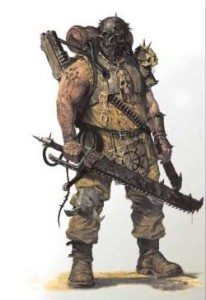 For the cost of an Ork Boy, the Chaos Cultist comes equipped with a 6+ armor save along with an autopistol (Strength 3, AP nothing) and Close Combat Weapon, providing them an additional attack to their basic human profile. While the Khorne Daemonkin codex is a newer book, the units therein remain largely unchanged from the previous Chaos Space Marines codex, and therefore the Cultist Champion is provided at no additional cost. This gives that model an additional attack as well as Leadership 8 which is quite a bit better than than the basic Cultist’s 7. This is fairly good in an era where many players refuse to pay 10 points for a Veteran upgrade.

You can upgrade the unit to have a Flamer or Heavy Stubber (36″, Str 4, AP -, Heavy 3) per 10 full models for 5 points each. Unless you’re going for a deckchair unit, I wouldn’t quite suggest the Heavy stubber as an option. Your mobile units could do well with a Flamer, however that option gets a little expensive since two more Cultists need to be added to the unit before the Flamer can be purchased.

You can also give any model an Autogun for one point per model. If you didn’t have to pay points for these weapons, this might be a good choice for a deckchair unit or boosting out of a Rhino for a quick blast of small arms fire. While it may be an alright choice in the Chaos Space Marines Codex, the Cultists’ painfully average Ballistic Skill, higher points cost per model, and your desire for them to die as violently as possible makes this a rather poor choice in the Khorne Daemonkin codex.

It bears mentioning that you can take a unit of Cultists up to 35 strong, but I doubt you’ll ever do that considering each unit of Cultists is worth 1 to 2 Blood Tithe Points throughout the game. To maximize your tithe, you may want to keep your units limited to 8 and take additional units rather than fewer large units. This is especially true considering your Champion is free of charge. 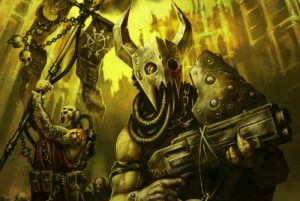 Cultists are not a requirement of the Slaughtercult (the Core Formation in the Blood Host Detachment) which already sports a Bloodletter requirement, but they are a nominal choice for your Troops requirement in a Combined Arms Detachment. Many KDK players are using CADs in their armies, even when using a Blood Host, mainly as a cheaper way of getting their Heldrakes. The go-to tax is often the minimum 58pt unit of 8 Cultists. Thinking of any unit as “just a tax”, however, is a mistake many players make. If you have a tool at your disposal, don’t think about how many points it cost you. Look at the unit’s strengths and weaknesses, compare it to the opposition, and use it to help you win the game. 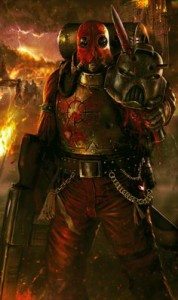 Of course, the most blunt use of Cultists is to generate Tithe points. Playing KDK often has a mini-game element of mitigating Tithe generation and it’s not a perfect science.  Many opponents will take control of your Tithe situation, forcing you into feast or famine on their terms. They might ignore the chaff completely and start nickle-and-diming your bigger units (Be’lakor, Bloodthirster of Insensate Rage, Flesh Hounds). This frustratingly denies you early Blood Tithe buffs. They also might try to obliterate as much as absolutely possible on Turn 1. Remember, no matter how little Tithe you spend at the start of the turn, you must empty your pool, so this strategy forces you to waste a ton of generated Tithe on your first choice.  If you’re facing Tau, or any other bonkers alpha strike army, you may want to hug the terrain with your cultists, forcing the enemy to use Markerlights and special rules to get complete kills. Make them work for it. Then, when the time is right, leap out and assault with what you have, Challenging for the extra Blood Tithe.

Of course, if all you’re interested in is free Bloodthirsters, then by all means, run your Cultists forward in the open, headlong into danger. However, sometimes you really don’t need another Bloodthirster which can be gunned down in the turn it takes for it to orient itself for a charge. Sometimes you just need to do whatever you can to make it into assault with what you already have.

One of the frustrating things about Cultists is their knack for dying off to two or one men remaining, breaking, and taking forever to run off the board. If you’re using a Slaughtercult in your army, the 0-2 units of Cultists from that Formation make wonderful Tithe batteries since you may choose to remove them as casualties when they fail a Morale Check. With a Slaughtercult, however, you likely already have cultists in other Detachments, so be sure to paint or model these in a unique way, perhaps with explosives strapped to them or simply an eight-fold path painted on their backs. 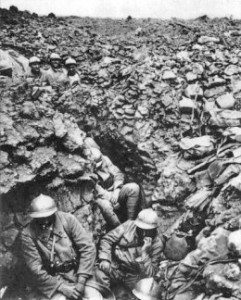 As I’ve already stated, many folks take Cultists as a part of one or more Combined Arms Detachments. While these Cultists are still great Tithe batteries, they’re also Objective Secured. At this point, no player should discount the value of this special rule, especially in a meta which uses progressive scoring in their missions. In the Khorne Daemonkin army, Cultists aren’t necessarily the deckchair unit they might be in Chaos Space Marines. I wouldn’t waste a lot of time or points on a unit of Cultists with Autoguns and Heavy Stubbers sitting in cover on backfield Objectives. Place your Objectives forward and go in for the kill.

Many players may choose simply to use Cultists for early-game scoring, denying their opponent an Objective they may be standing on before the Cultists are blown off the table. There is truly nothing wrong with this.  For my money, I buy a Rhino for each of my squads of Cultists. This makes them highly mobile and able to score Objectives outside their Rhino using Objective Secured. Of course, it’s also rather amusing to watch a squad of Windrider Jetbikes get Tank Shocked off an Objective and possibly off the board. In this configuration, it might not be terrible to add two more cultists and a flamer to use while cruising around in the Rhino, but this bears testing; the Rhino usually ends up moving 12 or 18 inches every turn as it goes for objectives, making the flamer kind of a once-per-game tool at best.

One of the more interesting things about fast, Objective Secured Cultists is that they may make your opponent think twice about their target priority. Left unchecked, the Cultists end up rolling around the battlefield and racking up points the entire game. If you can draw attention away from your Invisible D-Thirster, you’re in great shape. 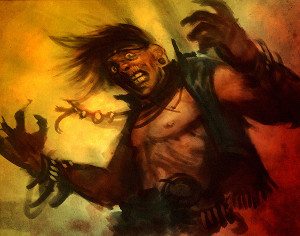 While Cultists from the Chaos Space Marines Codex have very little impetus to go out into the battlefield looking for trouble, for the Khorne Daemonkin, you may as well do as much damage as you can with your Cultists before they die. Of course, going on the offensive is always a measured decision, particularly with models with such a fragile profile. Having said that, Cultists are born to die and getting them into position and assaulting at the right time can help you win a gambit or even win a game. This is especially true if you feel like your Blood Tithe is anemic and you want the extra point for Challenging rather than simply letting your Cultists die to your opponent’s shooting. Granted, you can’t guarantee they’ll accept, but they could be taking on an awful risk with so many attacks coming their way.

Five attacks on the charge at Strength 4: this is the maximum assault capability of a 6 point Cultist in a Khorne Daemonkin army. Of course, that Cultist needs to be in a Slaughtercult to work at this peak efficiency, but they’re impressive none-the-less. With no buffs, the Cultist gets 4 attacks on the charge thanks to their Rage special rule and pistol + close-combat weapon. They get a fairly impressive 3 attacks when charged thanks to Counter-Attack. Again, it’s a measured decision to either attack or be attacked and Cultists in cover and sitting on an objective kind of don’t mind being assaulted.

Insatiable Bloodlust on the Blood Tithe Table gives cultists Furious Charge and the ability to glance armor value 10. Apocalyptic Fury grants them +1 attack. Unstoppable Ferocity, providing Feel no Pain, isn’t as great for either Cultists or Bloodletters considering their poor Toughness 3 and the prevalence of Strength 6 shooting in many other armies.

Of course, let’s make it perfectly clear, one should rarely make their Blood Tithe Table choices based on what buffs they give to Cultists. However, if you’re queued up for multiple assaults across the table with multiple units and you’re running a Slaughtercult, you could do a lot worse than picking both Apocalyptic Fury and Insatiable Bloodlust before assaulting in with fire in your eyes, a scream in your throat, and a doodie in your opponent’s pants.

I live! I die! I live again! WITNESS ME!

The differences between Khorne Daemonkin Cultists and Chaos Space Marines Cultists are a great example of why it is a fallacy to compare points costs from army to army, even if it is the same unit listing. What that unit brings to the table can be very different when you factor in the special rules and other units in either army. The Chaos Cultist is the grease to the machine which is any Khorne Daemonkin army.

Or, perhaps my adoration for these heretics with a can-do attitude is tainted by my love of Orks.

Be sure to let us know what you think in the comments section and remember, Frontline Gaming sells Games Workshop product at up to 25% off, every day