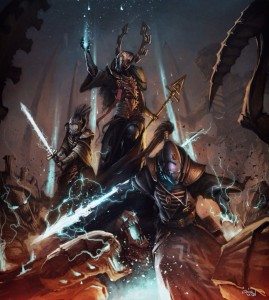 What do you get when a bunch of psychic Xenos get together let by a couple of exceedingly big brained ones?  An Eldar Seer Council of course.  Infamous for their ability to totally control the Psychic Phase, the Seer Council is a formation that is able to take advantage of the mechanics of the Psychic Phase like none other. Be sure to check the Tactics Corner for more great articles!

To use this formation, you’ll have to pick up 2 Farseers, one of which can be Eldrad Ulthran.  Additionally you must take a Warlock Conclave of at least 5 Warlocks.  If you want one member of the formation to be on a jetbike, you’ll have to mount all members on them.  This formation isn’t cheap by any means, but that’s the cost of doing business as they say.  This formation can manifest 8 warp dice right off the bat in its smallest size.  Though not quite the deathstar they once were, the Seer Council can still be a major threat to most armies. 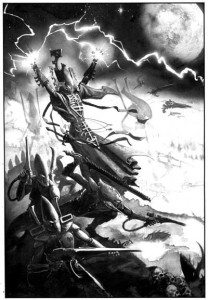 First things first, you should in my humble opinion always take the Seer Council as Skyrunners.  Toughness 3 and being stuck moving as Infantry, albeit fast Infantry, is not an acceptable option for such an expensive unit.  Jetbikes not only greatly increase the durability of the unit, but it helps them impact far more of the battlefield.  The ability for Eldar jetbikes to redeploy is second to none, and when this unit is throwing out psychic powers while moving, turbo boosting, and jumping in the assault phase, you can easily make sure your fragile pointy eared witches and warlocks are safe from most returning firepower.

Being forced into staying together is a rough patch for this unit.  Under the ITC they won’t be allowed to cast more than the highest mastery level in the unit.  Three powers a turn isn’t bad, but when we’re dumping so many points into a unit that really has no other means of doing damage output beyond the Psychic Phase, this becomes a bit of a liability. 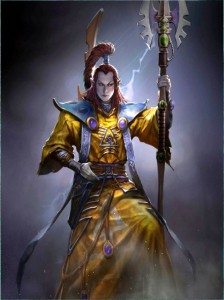 You should probably start your Warlocks on the Runes of Battle discipline table, roll until you get the powers you think you’ll need, and then with any remainders move onto Sanctic.  You’ll be looking for Sanctuary and Cleansing Flame.  If you get them, awesome; if not, it’s really not the end of the world.  The two Farseers I think need to go on Divination and the other on Telepathy.  These tables are quite simply the best in the game, and the ability for Farseers to cast powers reliably and relatively safer than any other psyker means that you’ll be casting powers nearly every time.  Especially when you take into account the formation’s Psychic Might special rule.

Movement will be the name of the game to keep the Seer Council alive and kicking.  Placing the unit in the right place will really allow you to cash in on the limited psychic powers you can cast.  This also allows you to move the Seer Council away from threats like Imperial Knights, Wraithknights, Canoptek Wraiths, Grav Centurions with the Hunter’s Eye, and all the other nasty things out there nowadays.  If you can maneuver your unit intelligently and stay away from the big scary things, then you’ll be able to use your psychic powers to either buff your units or do damage to your opponent. 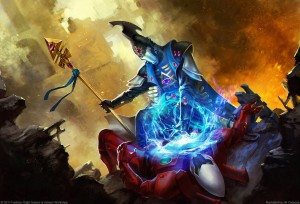 Going for powers that keep this unit alive will be tempting, as its such an expensive investment, you’ll want to do everything in your power to help you get the most out of your investment.  This is totally understandable and smart, but before you start dumping dice into Invisibility for your unit, make sure you take in the whole board.  With your turbo-boost move and extra movement in the Assault Phase, do you need to spend one of your precious powers on your own unit that can easily redeploy to safety?  If you plan on using the unit for an assault, then absolutely cast the power.  If not though, throwing that power onto a nearby Wraithknight will do infinitely more for you than simply putting it onto the Council.

This unit can have some serious combat teeth depending on which powers get rolled up, and can actually be a great tool for mulit-assaulting a ton of light vehicles like a Gladius Strike Force.  Smaller vulnerable units are great targets for the Seer Council, as they’ll be able to do enough damage with their Witchblades to really put the hurt on them, while still prevent the risk of falling in combat themselves.  Hitting multiple targets at once is almost always the best choice, but be careful.  If you bite off more than you can chew, you’ll be stuck in close combat without Hit and Run, while your opponent will be free to move about the table at their leisure.

Really, the Seer Council is just too expensive for what it gives you.  The format of how psychic powers work in the ITC combined with the limits for which powers are available to the Warlocks means that its hard to really capitalize on the potential of this unit.  The Warlocks all too often become reduced to nothing more than bodies to soak up wounds, something that can be done by Scatterbikes for cheaper.

Let us know your thoughts on the Seer Council in the comments section! And as always, Frontline Gaming sells Games Workshop product at up to 25% off, everyday!

Posted on January 21, 2016 by Mr.MoreTanks in 40K, Editorial, Tactics, Uncategorized

Couple of things- first off, the minimum warp charge generated is actually 11, not 8 (three each for Farseers, five for the Warlocks.) Second, although the Farseers must be joined to the unit, they are still allowed to cast powers individually- so the Warlocks will be able to manifest 1-3 powers per turn, and then each Farseer has an additional three per turn they can potentially use.

Telepathy is a very solid table due to Invis and Shrouding, so it’s likely you are rolling several of your powers on there, but don’t neglect Fate- with the ability to easily get a 2+ Jink save, having access to Fortune is a pretty big deal, and Eldritch Storm is likewise huge when you’re harvesting charges on a 3+. Sanctic also has some options, giving you a bunch of nice Witchfires as well as Sanctuary, which brings you to a 3++.

I see a lot of people run the Shard on the formation for Fearless, which you really want to have, but with Embolden and Will of Asuryan both giving it as well I’m not sure the 40pt tax is necessary. Still, it is a solid melee weapon (especially in a challenge) and saves on casting another power.

When you roll up the right powers (Invis, Fortune, Horrify, Renewer, etc) the Council is all but impossible to kill- however, lack of any AP on their weapons means that it really isn’t putting out as much damage as you’d think. (If you were allowed to take stuff from the Iyanden supplement this could well change, as Soulshrive and Spirit Lance both hit pretty hard.) The real problem is less the cost and more the fact that your chances of not getting what you need are too high- and without those powers, you’re in big trouble. It actually trumps a lot of other deathstars in a straight fight and can usually take down Knights and other superheavies, but should you fail (or the enemy deny, or you just didn’t get) a key power the unit folds like wet paper.

I usually run my seer council with an attached CAD skyrunner Autarch with banshee mask and Shard of Anaris, and sometimes a lance and fusion gun too for good measure. It makes the unit that much better in assault and challenges – especially for multi-assaulting marines and tau, where the banshee mask denies the ability to overwatch (in case you don’t roll up that invincible cocktail of psychic powers). The reserves manipulation helps too when you need to reserve the unit in case you don’t have first turn. A seer council that is exposed to an alpha strike without its powers up is usually a dead one.

Baharroth is a good choice to join them as well – he can tank with his 2+ save, and most importantly gives them hit and run. He can’t turboboost though.

If you don’t have hit-and-run, you could always roll on the sanctic table for Gate of Infinity to teleport out of combat. You’ll have to be able to survive a full turn to be able to cast it while you’re locked in combat, but it works like a charm to get the hell outta dodge when you need it!

The Australian format I play under doesn’t limit the powers per turn by the whole unit, instead by the psykers individual mastery. Additionally the seer council can cast the same power multiple times so long as it sources from a different psyker. Would this difference make it a competitive choice here?

Others may not agree with me, but as far as psyker units go, the Seer Council is one of the most competitive units you can get. They make highly efficient use of those 11 warp charges, and unlike Daemons or Grey Knights or other psychic heavy armies, they don’t need much more warp charge to successfully manifest their powers due to the 3+ harvesting, spirit stones, and the ability to selectively re-roll once a turn with the farseer runes. I find that even if you don’t roll up the best defensive powers (shrouding, invis, fortune), you’re left with some solid fallbacks (conceal, prescience, guide, psychic shriek), and most likely some kickass offensive ones like eldritch storm, cleansing flame, vortex of doom, dominate, or other great combos. I particularly enjoy hitting a tough enemy unit with Horrify or Terrify, and then psychic shriek. If you don’t roll the right cocktail of powers, you can always turbo boost to avoid the enemy, while solidly buffing the rest of your force with some excellent blessings.

If you don’t get first turn against an alpha strike army though, make sure to reserve them or hide them behind a void shield generator, or else they’ll get shellacked ; (

“The Australian format I play under doesn’t limit the powers per turn by the whole unit, instead by the psykers individual mastery”

Neither does the ITC, I think that was just a misunderstanding of the author. They do limit what power a unit can cast (eg only one cast of a particular power per unit) but not the ML.