Clover362 to review the ultimate space ninja, Jain Zar.  Jain Zar is the Phoenix Lord for the Howling Banshee Aspect Warririors.  You would expect this ultimate epitome of the Eldar’s theory of close combat to be an absolute bad ass in assault, but in typical Games Workshop fashion they only got it half right with Jain Zar.

Jain Zar has some cool special rules and a very nice stat line but  she is pretty fragile for what she is designed to do and she has a sizable price tag of 200 points.  If you are a clever general and can take advantage of Jain Zar’s special rules she will put in work for your Army.  For more reviews and tactics articles make sure to check out Frontline Gaming’s Tactics Corner.

Who is this Chick?

Jain Zar is the Phoenix Lord of the Howling Banshees.  According to the fluff, her soul has merged with all the previous Phoenix Lords that came before her giving her the benefit of thousands of years of their skill, knowledge, and experience.  Thus, you would expect her to boast an impressive stat line for close combat and she does.  This ultimate Howling Banshee rocks a WS/BS of 7, S/T 4, 3 W, I 7, 4 A, LD 10, and a 2+ save.  This is a good stat line to do work in close combat.

What Makes Her So Special?

Jain Zar rocks 11 special rules when you include her preset Warlord trait.  That’s a lot to remember, but she needs all of them to be able to accomplish her task of being the ultimate combat ninja. Jain Zar has the following special rules: 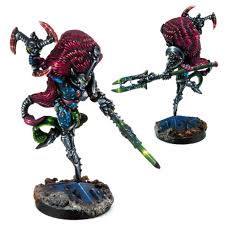 What Are All Those Fancy Things?

Jain Zar has some really solid Wargear but her lack of an invulnerable save hurts a close combat specialist a lot.

So Is She Good or Bad?

Jain Zar is what I would call situationally good.  That is to say, Jain Zar is great if she hits the right target but kind of poor if she hits the wrong target.  IMO a 200 point ultimate space ninja should be able to go toe to toe with all comers, but her lack of  an invulnerable save means there are certain targets she just can’t compete against.

So what is the right target?  Jain Zar will murder basic infantry (and almost certainly sweep them with her initiative de-buff) and she is great against any non-monstrous creature she can single out through the challenge system, think Chapter Masters, Destroyer Lords, Nobs, Warbosses, ect.    With her WS de-buff a Chapter Master will hit her on fives and will likely be swinging last with just his bolt pistol.  Against the standard Chapter Master with the Shield Eternal on a bike Jain Zar will do .37 wounds per assault phase to the chapter masters .111.  Those numbers get even better against a T4 model. Also a nice little trick to remember is that Hit and Run tests against initiative.  Those White Scars grav Centurions will only escape her clutches 1/6th of the time instead of 2/3rds.  That is a big deal as sometimes tying something up even if it will slowly grind you down is a winning strategy.  So what targets do you have to watch out for?  Mainly monstrous creatures, any thing with multiple AP2 weapons, or models with lots of attacks and rending.  These targets will chew through her even if they are hitting on her 5’s.

If you are going to run Jain Zar, I think it makes sense to run her in a Living Legend Detachment as part of an Eldar War Host.  This will let her automatically run 6″ (before her bonus inches) and makes her fast enough on foot to pretty much grantee a turn 2 charge.  I also think it is mandatory to run her in a unit of Howling Banshees to give her a bit of a meat shield against incoming AP2 shooting attacks, not to mention the Howling Banshees get much better when the opponent is only hitting them on 5’s.

Overall Jain Zar  might not be the most competitive choice but she is not terrible either.  She would make a great edition to any type of Banshee themed list, or give you a decent close combat option in a infantry heavy War Host army.

I like the idea of running her with harlequins.

Not a bad idea! She hits really hard.

There is a great batrep on youtube of a Footdar list versus battle company, where Jain Zar runs on foot with 10 Banshees and eventually cuts down the Marine warlord after trouncing through several squads. The girls get whittled right down until they are all dead, but the carnage speaks for itself.

Yeah, I could totally see that. She really does pack a punch and the increased speed is awesome.

I have had great luck running her with Wraithblades. The extra run distance makes them a threat much faster, the Initiative drop helps mitigate Unwieldy, the WS drop boosts survival, and Disarm helps the entire team.

Wraithstars are far from competitive, but Jain does give them a pretty substantial boost.

Hey, that sounds like a super fun combo, actually!

Wraithblades don’t have acrobatic and the entire unit must have the rule to get that extra 3″ run/charge.

I think he’s referring to Falcon’s Swiftness, her warlord trait, which adds 3″ to her run.

Wraithstars can do really. A local player has done very well with them. Another combo I would do is put jain zhar with harles. Between veil of tears and her CC debuff it is like the unit has invis as a primaris for 1 WC. Everything will be hitting them on 5s and striking last.

This ninja like most of the phoenix lords has the same problems as most of the others. It is hard to find a place for her due to her point cost and a reliable way to get her and her unit into assault.

The phoenix lords are awesome, but really hard to find a proper place for in most lists. Which in unfortunate as nce they are all super cool and would be tons of fun to play with.

She also suffers from being 200pts with only three wounds and no invuln, although her Disarm ability goes a long ways towards mitigating that at least. But if she’s not in a challenge, or is fighting a character with natural AP2/paired weapons, she is in serious trouble.

I think she would probably be worth taking at 130/ possibly 150. Or if she was 200 with a 4+ invul. The problem (as usual with this codex) is how good is she with a banshee squad compared against a wraithknight?

That being said, I think it could possibly work in a footdar list as your anti death star. Sorry giant unit of thunderwolves, she challenged out an iron priest and took his hammer away then reduced the whole thing to I1. It sounds like the ultimate tarpit. Is the initative penalty permanent or just the first phase?

This is the only situation where I see her WAY outscoring her points.

Yeah I think the rules for the phoenix lords are pretty good, but they need a solid points decrease for me to even really consider taking.

It always feels like the Ninja Lady would be pretty good with Striking Scorpions around. The exarch power of the Scorpions would switch up to getting +5 of those sweet S6 AP2 attacks per turn against almost any opposing character. Ouch.

In any other codex that would be a strong contender for lists.

That’s actually a pretty cool idea, the only problem being finding a way to get her into the unit, since she lacks Infiltrate.

I do love the idea of getting +5 attacks with that dude, though. Hmm.

Well, she just has to get into the same *combat*, or within 6″ of the combat, to give out the debuff yes? Still a pain in the ass to pull off, but not impossible.

At her price tag all her special rules shoudl transfer fully and not just work with Banshees. Plus she realy suffers from “Is in the Eldar Codex” syndrome hard. You could take so many Warp Spiders for those points…

Lol, exactly. But, you can use here and not suffer for it.

I have some success dropping her down via webway portal attached to a Grotesquerie. She’s slowed down, but she gets T5(possibly T6 if you roll well), a lot of ablative wounds, and my 6+ save Grotesques avoid getting Overwatched. It depends on how well you whether the turn they arrive as you have no shooting worth mentioning.