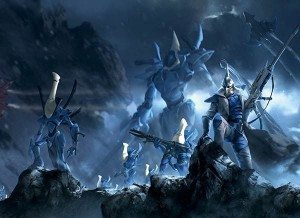 Every Codex needs a lone wolf bad ass.  Imperials get them through the the Assassins.  Eldar get theirs in the form of of Illic Nightspear.  The Ultimate Eldar Ranger is bit pricey for what you get but Illic Nightspear definitely can bring some utility to your list.  For more reviews and tactics articles make sure to check out Frontline Gaming’s Tactics Corner.

In previous versions of the game Illic Nightspear allowed you to essentially create a suicide/alpha strike squad with is special infiltrate ability.  Now with Games Workshop having clarified the issue regarding independent characters with infiltrate joining units without infiltrate  those days are gone but Illic Nightspear can still give you something in your games of 40k. 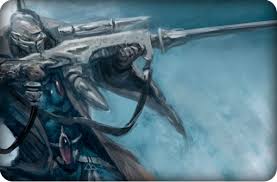 Illic Nightspear brings a decent stat line for a model that will most likely hiding in cover and shooting for most of the game.  He is WS 5, BS 9, T/S 3, W 3, A 3, I 6, LD 10, and a 5+ save.  He clocks in at 140 points.  Without Eternal Warrior and only a 5+ save, Illic Nightspear loses a bit of point efficiency as there will be plenty of times you won’t get the benefit for paying for those extra wounds. 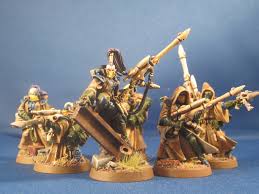 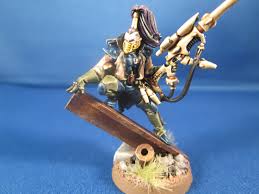 Illic Nightspear can be taken as a Heroes of the Craftworlds detachment in an Eldar War Host so you can fit him into pretty much any type of list you want to build.  If you decide to take Illic Nightspear his best use is to handout Shrouded to whatever unit you put him in.  If you run him as your Warlord he does well sitting in a unit of Dark Reapers.  His 48″ range matches the Reapers and you can Split Fire if you want to.  Giving a large unit of Dark Reapers a 2+ cover save in a ruin is a nice way to make them very survivable while they dish out pain.  Running him in a group of Rangers isn’t bad but they don’t do a lot of damage and the Rangers already have Shrouded.  Illic Nightspear’s shrouded ability can also be used to protect a seer council if you are up against an alpha striking army.  If you put Illic Nightspear into your Seer council they will have a 2+ jink save immediately and should be able to survive a fair amount of punishment before jetting away on your turn.  It is also nice that this is a non-psycic ability as you know a drop pod Culexus will becoming straight for your seer council.  Finally, a kind of hilarious, way yo use Illic Nightspear is to have him man any gun emplacements.  Since all of his shots are precision shots you can assign all the wounds from a large blast onto a character.  The Character will still get look out sir rolls but they will fail a couple with enough wounds.

Overall Illic Nightspear does not have a lot of output for a 140 point model.  That said if you take him he can definitely contribute to your list.  Handing out shrouding is a great ability and if you get hot with your rolls to wound he can claim some big heads for his wall.

Seems a very expensive way of giving Shrouded to a unit, especially when you can add a Warlock (in some cases) or Shadowseer for less than half the points of this guy.