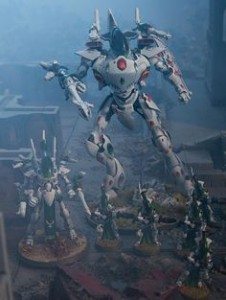 Howdy fellow gamers, Mr.MoreTanks with an article on a ghostly formation, the Wraith Host.  Packing what is widely considered the best unit in the game, along with several other nasty ones, this formation is no joke.  Wrapped up in a nice special rules, this formation brings you the means to field a nearly all Wraith force in a powerful and effective manner. If you’re looking for more tips and strategies, be sure to check out some more articles in the Tactics Corner.

This formation is comprised of 1 Spiritseer, 3 units of Wraithguard and or Wraithblades, a Wraithlord, and a Wraithknight.  We’ve got some really nasty units in here for sure, and they’ll be able to lay down that terrible D-train weapon of pain on Monkiegh and the like while being able to take the returning firepower on the chin.  While Eldar are know for their brutal firepower, they’re not usually know for being all that durable, and that’s where this formation stands out.  The Special Rules will also help to give a bit of a speed boost to your ghost warriors in order to help them keep up with the rest of your forces.  The Wraithlord isn’t necessarily the most exciting unit in the game, but as any Tyranid player will tell you, you could be a lot worse off in the Monstrous Creatures department. 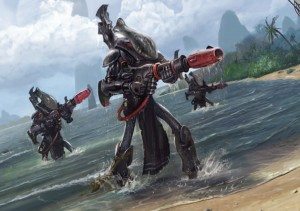 Right off the bat, I think you go with Telepathy for the Spiritseer, Psychic Shriek is always a win, and if you happen to roll up Invisibility, well that’s just extra candy.  Why this will really be useful will come later.  The Spiritseer should be kept pretty cheap, they’re already the weakest part of this expensive formation so adding more points to them I think is the wrong way to go for sure. 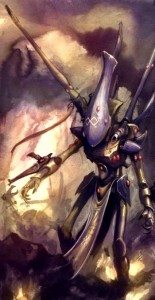 On to the brass tax for our Wraithguard, we’ll definitely be picking the guard versions over the blades.  Close combat power is always nice, but not going to be the best option here.  We should kit them out in two different ways, two units should carry D-scythes and the other will be packing wraithcannons.  All of these weapons have insanely short ranges, but we’ll get into why we went with the scythes on two of them.  Long story short, these will let us threaten more things and ignore cover with them.  You won’t want more than 5 Wraithguard in each unit by the way, the costs are already big.

The Wraithlord is the unit that you’ll be least excited about, but that doesn’t mean that it has to be totally worthless.  You should probably give this guy two brightlances or two starcannons.  Either way, this guy should be ready to try and crack open a transport for the Wraithguard can nix the units within it.  The ghostglaive could be added, but you really won’t be needing it in all likelihood.

The Wraithknight is surprise, surprise, the best part of this formation.  You’ll be throwing on at least one scatter laser, just so you can assault something else.  You can make an argument to swap out the wraithcannons for a suncannon and a shield, and an Invulnerable Save is a very good thing to have, and if you do this, you may want to throw on another scatter laser or take two starcannons instead.  At the end of the day though, I think you should keep the wraithcannons to blast open vehicles so our Wraith units can D-scythe the occupants into oblivion.  Then, pump something nearby with a scatter laser and smash it to bits in the Assault Phase. 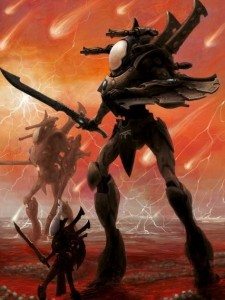 “But Mr.MoreTanks!” you cry, ever so aware of my seeming shortsightedness regarding the lack of range on the Wraithguard units, “how will our Wraithguard’s weapons be close enough to do anything to said occupants our Wraithknight and lord will be knocking out of transports?”  I’ll tell you my friends, we do it the same way my favorite codex does it, Allies.  The Monkeigh may seem like, well… monkeys, to the Eldar, but they sure do know how to use the Allied Chart. Like Codex Imperium of Man (all Imperial codexes are actually just one big one), the Eldar can find ways to make up for their shortcomings by bringing in their cousins from Commorragh.  This formation pairs very well with an extremely cheap CAD of Dark Eldar, packing two cheap Archons with Web Way Portals, maybe give them a shadow field too.  This isn’t a cheap tax, and to be fair, isn’t really a tax, just a means to get the most out of this formation.  Play like the humans do, play dirty.  Transports are an option, and can be more flexible, but I feel like the Web Way Portal option is too good to resist.  If your meta is Tau heavy though, a transport may be a better option.

Stick the Archons in with the D-scythe Wraithguard, you can also opt to toss the Spiritseer into one of these units as well.  If you do, the psyker should likely go on Telepathy.  The other Wraithguard unit will be condemned to stroll alongside the Wraithlord, chasing after the Wraithknight as you slam it down your opponent’s throat like a sledgehammer.  Its a messy analogy, but its fitting.  With Battle Focus, the D-scythe units will be able to Run after they place themselves where ever they want onto the field and place themselves in the perfect position to all but guarantee the destruction of an enemy unit.   Even with the Distort Scythe special rule, the D-scythes will smoke just about anything. 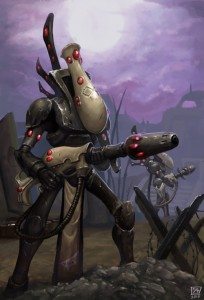 Within a War Host, this formation will eat up an insane amount of points, especially if you’re going to try and cram in any Dark Eldar.  You’re better off running it outside of a War Host, and to be honest, in a CAD as well.  Though the gaining Battle Focus is awesome, the taxes for it are high.  You really don’t need to ever take a Wraithlord or Spiritseer, and having three units of Wraithguard is a bit unnecessary as well. Still, this is far from a worthless formation, and there are ways that we can make it succeed.  What do you think fellow gamers?  Tell us below in the comments, happy gaming, and may the dice be ever in your favor!

What do you think about the formation? Hot or not? And as always, Frontline Gaming sells Games Workshop product at up to 25% off, every day!

the spirit seer is golden. chuck him in a dolled up wave serpent and get re rolls on whatever you want . 18inch radius is huge especially from a transport.
if theres a flier run up your d guns and force him to jink. you’ll probably land at least one hit.
being in a warhost and having a guaranteed run of six also makes a unit of wraith blades pretty cool. 12 inch move a turn is lovely. being able to hide behind buildings or get clear shots then running back with any unit with guns is excellent.

a wraith knight with 6 inch battle focus and free presience….sounds terrible:P being able to shoot Tau heavies and waltz back out of their range.. also great:)

oh, for even more fun, you could take the doom of mymeara court option, take the wraith seer[now an IC :)] three units of wraith blades. and then take the wraith host for some tough as nails crazy

True. Better off taking Wave Serpents, deep striking them (leaving the Archon with WWP inside) and then disembarking the Wraithguard alone. They can then battle focus if needed.

Plus, if you WWP Scytheguard without a transport you can struggle to place your D-templates without touching any of your own models.

I think this formation is a lot better than given credit for. I personally run the formation at 1130 points. Two units of foot slogging wraithguard with a basic swordlord escort. One unit of d-scyths in a wave serpent along with the spirit seer. The spirit seer in a wave serpent is great for expanding the range of reroll to hits. The wraithlord draws fire away from the wraithknight. The wraithlord also can challenge out characters in assaults. You get a basic hammer and anvil army with the formation.

If you make a craftworld warhost with this formation your entire army becomes deceptively fast thereby extending the range of all the D guns. Even without the craftworld warhost, this formation provides a heap of high toughness fearless wounds to chew threw that can potentially move 12 inches a turn then shoot. That greatly complements other strong formations of less durable Eldar units such as an aspect shrine. Just my two bits anyway.