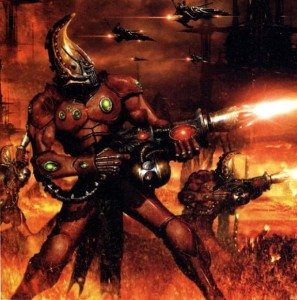 Welcome to another wild and wooly Eldar Codex review brought to you by the ever lovely Goatboy.  Today I want to chatter on about the nonsense vehicle kill unit known as the Fire Dragons.

They used to be the default anti vehicle option for the Eldar codex but with the introduction of the Dirty D they have fallen a bit to the wayside.  They are still extremely efficient at what they do and in specific builds they shine a heck of a lot brighter then their Ghost Robot rivals.

Fire Dragons are the anti vehicle Aspect of the Eldar Warhost.  They carry potent melta based weapons that are poised to rip apart anything with a set of Hull Points for protection.  They are known as the most destructive of the Aspect Warriors with their love of shooting burning death at anything that moves.  You could say they are the Hot Heads of the Eldar race. 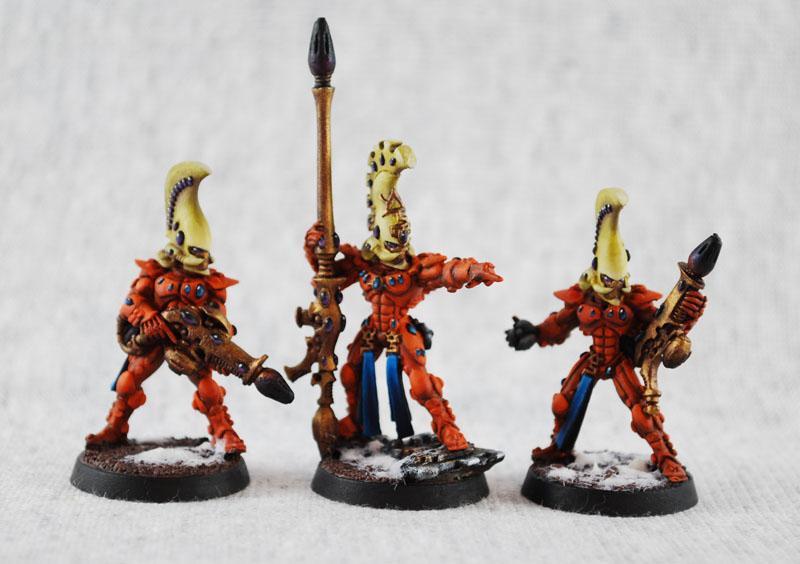 The Fire Dragon unit is the anti vehicle/building expect.  They are equipped with everything they need to blow a Popsicle stand to smithereens.  They all come equipment with Fusion Guns as well as Melta Bombs.  If they can touch a tank, don’t expect it to survive with their set of rules and Exarch abilities.  I have seen them used as a nice Anti Knight unit when picked as the Aspects out of an Aspect host Formation.  They also love to ride around in Venoms. 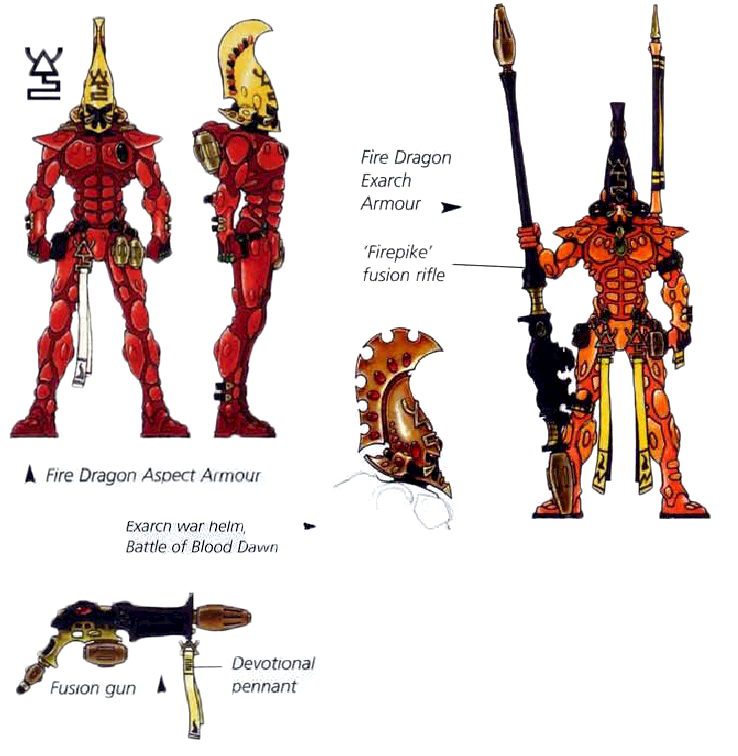 If you can’t tell by their Wargear set up – they are design to kill vehicles close range and live in the moment of the explosion.  The 3+ armor should save them a bit from the debris as well.

They lack some of the extra rules some of the other Aspects have – but they make up for it by being really dang good at their job role.  If they hit a vehicle don’t expect it to live unless it has a 2+ save of some sort.  Even then I expect cascading penetration rolls to blow up even the biggest Super Heavy. 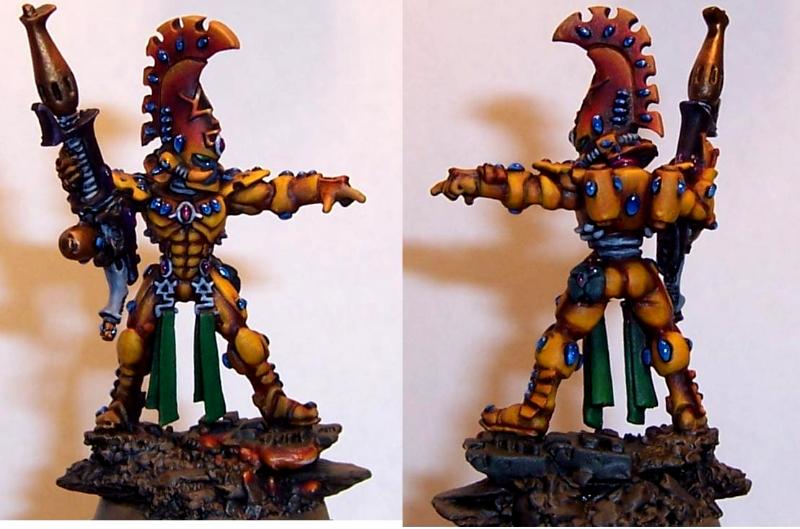 Fire Dragons destroy vehicles, pure and simple. Each one packs what is effectively a melta gun and a melta bomb on a BS/WS4 platform. The Exacrh gives you a BS 5 model with 2 wounds and options for some awesome upgrades such as Crack Shot, or the Firepike. With +1 on the damage table though, you could easily just take a unit of 5 and expect to obliterate any vehicle in the game fairly easily. Even Super Heavy vehicles fear Fire Dragons! They also work well in the War Host detachment as Matchless Agility gives them an automatic 6″ run on their Battle Focus rolls, which gives them huge range for a unit with Fusion/Melta weapons. The only real downside to Fire Dragons is the fact that they tend to nuke something and then die a horrible death. Fire Dragons can avoid this with Battle Focus if there is something to hide behind in close proximity, but, be aware that these guys will be a high target priority.

The last time I played against a set of Fire Dragons was when a player combo’d them up with the Dark Eldar.  They grabbed a bunch of Venoms at the FA option and this Aspect hose rode around in there.  This seemed to help them out a lot as an Open Topped vehicle can give them the extra bit of movement they need to get into Melta range.  They were actually a pretty big help to the Dark Eldar as while Dark Lances can be ok – this much massed guaranteed vehicle destruction does wonders for an army based on shooting a ton of poison shards.  They could help pop all those pesky free Rhinos the Rhino Dealership seems to give out to those Marine armies in need.

I have also seen them used in conjunction with the Falcon and its ability to take 3 in a unit and get some really sweet pinpoint Deep strike action.  He used the 3 Falcons plus Fire Dragons to pour out a ton of Strength 8 firepower into enemy units.  They would come in, jump out the put, Battle focus within Range and just mow down so many enemies.  Heck if I was a Knight player I would drop my load of gears right there and then when they came cruising out of the Falcons.  He went with an unconventional list as it had no Psychics, utilized an Autarch and tried to Null Deploy his way to victory. 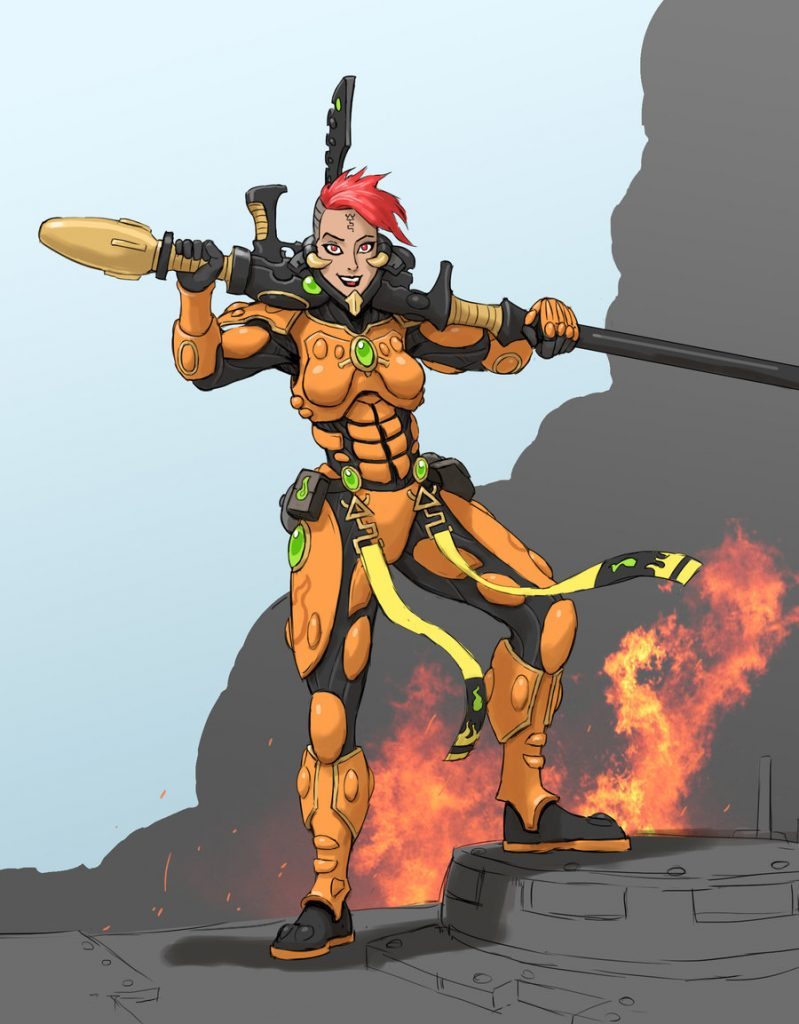 I have always wondered why Eldar didn’t have an Anti MC/GC option that was like the Fire Dragons.  They utilized some kind of Flesh Bane fusion gun that cooked the meat of the monsters?  Sure a Fusion gun can do the same thing but it always felt like in this day an age of crazy Space Monsters coming to eat all your psychics they might have figured out a way that isn’t just a D weapon strapped to the ghost of your brother/sister. But I digress, they do have you know, Warp Spiders, Windrider Jetbikes, rending ninja star shooters…

I think the Fire Dragons and Warp Spiders are customer made for the Aspect Host formation.  It seems that formation just loves to be utilized with anything that shoots and these guys shoot very well based on their setup.  They even don’t need that much support to do what they are designed to do.  I think that is the key to making these Aspect work.  Its when they require too much support that it becomes hard to truly fit them in.  So much of the game is based on having extreme answers to something and these guys really answer the call to beating up big friggin vehicles.

With Tau upon us, they might get set down as that army does very well killing moving boxes/robots so I don’t know how many will see on the table top.  I think using these guys as a surgical strike designed to rough up tough units as you set up better answers.  They can hurt a GC/MC with massed Melta bombs so while they are not going to “win” the battle they might take off 3 wounds and give you that extra maelstrom point you need to win that ITC game.

Ahhh, Fire Dragons. One of the all time great Eldar units! Still so good.

Battle Focus and/or transports are great for dodging Knight’s Ion Shields. Drop into one arc, let them set the Shield at the beginning of your shooting phase, Run into a different arc and then fire away.

I picked a squad up for my Dark Eldar for the reasons listed above, I love this unit!

Yeah, I take them as part of an Aspect Host and put them in a DE Raider with WWP Archon. Pretty much guaranteed destruction of any vehicle, including super heavies.

I put my Fire Dragons in a Cloudstrike (Squadron of 3 Falcons). The Falcons, armed with Pulse Lasers paired with Star Cannons (and Shuriken Cannons), bring a lot of AP2 to the table. They’re expensive (Holo Fields are a must, in my opinion), but zero-scatter Deep Strike is not to be underestimated.

When deploying vs. an Imperial Knight, I disembark the Fire Dragons so that 3 are just to one side of a ‘facing’ boundary and three are just to the other side. That way, even a 1″ Battle Focus puts all the Fire Dragons into an un-shielded facing. This is particularly effective against a War Convocation (the 4+ cover save canticle helps here).

I play this list without a Wraith Knight (when I’m playing for ‘fun’) and without a Far Seer, but I never leave home without an Autarch and some Distortion Cannons.

Fun Fact: The electronic version of ‘Crack Shot’ (iPad) does not include the “Exarch Only” limitation…. O.o