Clover362 here with another installment of Fronline Gaming’s review of the Eldar Codex.  Today, I will be looking at the Dire Avenger Shrine formation.

I know formations are not everyone’s cup of tea, but for me I love that Games Workshop has given players so many choices and incentive to take different units in different combinations.  Now sprinkle in some bonuses and some negatives to taking formations and our game has more and more choice for the tactical general.  For more Reviews and tactics articles for Eldar or 40k in general make sure to check out Frontline Gaming’s Tactics Corner.

When evaluating whether or not to take a unit outside of a CAD and in a formation you want to evaluate the total cost, what you gain, and what you lose.  For troop choices you are usually giving up Objective Secured if you take that same unit in a formation.  Objective Secured is an extremely powerful rule that can literally be game winning, so the buffs of the formation have to be really strong to justify losing it.  For my money, the Dire Avenger Shrine is a formation that is powerful enough to justify losing Ob. Sec. 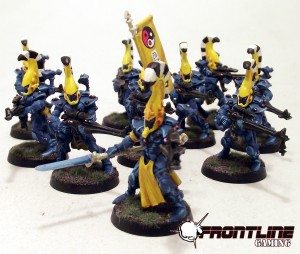 At a minimum this formation will cost you 195 points (really cheap) or up to 720 points before Exarch and Wargear upgrades (expensive).  Personally, I would run this formation with 3 basic 10 man squads for a  price of 390 points.  As I will discuss below, you get a lot for the points and you still have plenty of points leftover to build  the rest of your army. 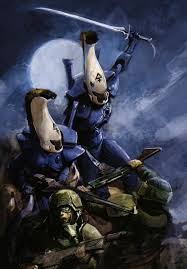 Dire Avengers when taken in a CAD have Objective Secured, in the Dire Avenger Shrine Formation they lose that rule but gain the following:

Remember if you are taking the Dire Avenger Shrine as pat of a War Host your Dire Avengers automatically get a 6″ run move due to the Matchless Agility command benefit.  That effectively makes all of this offensive firepower range 30″, meaning you should have no problem setting up your troops to maximize that Killing Strike shooting phase.

These Special rules jack up Dire Avengers offensive potential and make it much harder to move them off of where they are standing.  That is really really good. 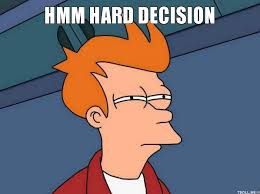 To CAD or not to CAD

So is it worth it?  I would say yes for three reasons.  First, the formation is a huge force multiplier.  Going from BS 5 from BS 4 means that on every turn your 60 shots will generate almost as many hits as if you were shooting with four BS 4 squads.  So for non-Killing Strike turns you are getting 16.7% more hits out of your Dire Avenger squads than when taken in a CAD.  On your Killing Strike turn you are doing the equivalent number of hits as  almost 6 squads of Dire Avengers taken in a CAD!!!!  With pseudo-rending the more hits you are doing the deadlier the shooting is. These guys will just shred toughness based targets, particularly MCs. Combine this with psychic buffs such as Doom, and watch enemy units simply melt to their firepower. 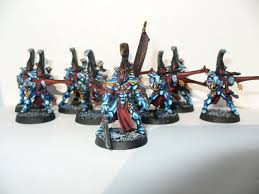 My main problem with the Avenger Shrine is one that a lot of units in the Eldar codex can have- namely, that there is another option that pretty much always does the job better. An Aspect Shrine of Warp Spiders won’t get quite as many shots as the Avenger Shrine will, but they will wound more often, be approximately as tough by the numbers, and have VASTLY more mobility options (not to mention near-guaranteed arrival rather than trying to hoof it across the field or buy a pricey transport.)

I wanna say cost and vulnerability, but that’s up to anyone’s game choice

They certainly have an embarrassment of riches. For almost every codex entry I think “what if they were orks” and the answer is pretty obvious that I would run them in a heartbeat.

The simple answer to that is you can take both. Another is the relative cost of each unit. 3 ten man squads of warpspiders while awesome cost a lot more that the dire avengers.

What makes the Eldar codex so powerful is you don’t really have to choose one awesome thing over another.

Sure, but why _would_ you? If Warp Spiders do the same job as Dire Avengers but better, why even bother taking the Avengers? Spiders do admittedly cost more- but in return they are more survivable, more maneuverable, and more damaging to almost all targets.

Yes they are better than Dire Avengers in getting around the table and can wound most things on 2s, but that’s also what makes them a higher priority target. Where people might underestimate the Dire Avengers, because “it’s just troops on foot, I’ll deal with them later”. So while they’re dedicated time and resources in hunting down the spiders, the avengers sneaks into position and the reaping begins.

In most, if not all, of my games using spiders they just draw silly amounts of fire or people dedicate units to just hunt them down and assault them.

I use both! I find them to be very complimentary with one another. And that turn the Dires dump 90 shots on something is just brutal.

Sure, but that’s just your opponent making decisions- if they’re out to kill the Spiders, it’s because the Spiders need to be killed, whereas the Avengers don’t necessarily. That’s like citing the fact that your opponents always shoot your Scat Bikes before your Penitent Engine as an advantage for the Engine- it’s really only indicative that your opponents know which unit is more effective.

I guess my question would be, aside from the joy of throwing a bucket of dice or liking the fluff/models for DA, what actual advantages do they have over Warp Spiders? I can understand picking units for reasons of aesthetics or personal preference or whatever, but a lot of people seem to be arguing that they have mechanical advantages compared to Spiders, which I just don’t get.

Yeah, that’s it, isn’t it? Eldar are spoiled for choice.

I use the Dire Avenger Shrine in my Footdar list and they are just devastating on offense. The firepower and speed the formation packs is incredible.

No, these rules are no longer legal.