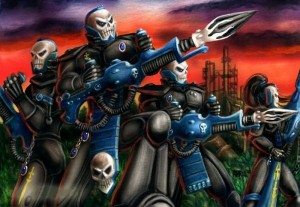 Goatboy here again with another Eldar review.  This time I talk about the old boogie man from my days of starting 40k – the Dark Reapers.  These guys used to kill so many of my Chaos Space Marines it was scary.  Sure they lost some of their edge but they are still really good at the job they were set up to do: kill all kinds of things.

The Dark Reapers are the heavy weapon weilding, Space Marine Devastator counterpart in the Eldar Codex.  They are the long range murder machines and they are meant to represent dark and dour aspects of the Eldar Warhost.  Their rules got a major update in this new codex.  The crazy thing is – while if you had any other army with a unit with all these rules they would be an auto-take – they are not often picked for a normal Eldar army team.  This shows you how extremely strong most of the Eldar choices are and is kind of a shame when you see some of the Aspect warriors just not getting the love they deserve.  All I know is I am still scared of those darn Reapers! They put out serious firepower.

This unit is pretty simple as they are the long range, heavy weapon toting infantry unit for the Eldar army.  Their missile launcher can shoot all kinds of missiles that cause all sorts of damage.  Their Exarch has some pretty nutty rules and they have some special rules that make them pretty annoying to deal with.

The Dark Reapers are somewhat out of place when you look at the other options in the Codex.  There are some other D weapon options in the heavy support section that just leave them lacking in comparison.  Plus the notorious Windrider Jetbike with its massed Str 6 shooting and mobility can do just as much damage by forcing armor saves versus ignoring them.  Its just kind of crazy to think this unit would be an auto take for the Orks, Nids, and Chaos Space Marines, etc. but are relegated to their status as a 3rd strength practice squad when compared to other Eldar units.  If you are going to take them, do so in an Aspect Host to help them hit on 2+’s against some of the massed biker lists we see now and again but anything fast could easily get them and chew them up in combat. With that BS 5 (6 on the Exarch), they are seriously deadly in the shooting phase. The reroll for morale checks is also excellent to keep you from falling off of the board edge with an unlucky leadership check. With Slow and Purposeful, they are also great for starting out in hiding, and then moving into position to shoot. This is a big help to them and I would love to see it on units like Devastators. 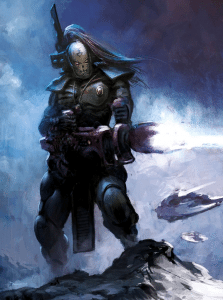 You can consider giving them the various upgrades available to them the Starshot Missile which helps a lot vs. MCs and Vehicles, but it is a bit pricey. Leaving them as MEQ and Bike shredding bests with just the Starswarm Missiles is a solid choice. With the prevalence of White Scars bikers, Raven Wing Dark Knights and ironically, Eldar Jetbikes, their special abilities to really punish these types of units is awesome. If you play against a lot of Skimmers, the strength 8 missiles with these abilities makes this a deadly unit.

Their ability to reposition and fire is one of their main strengths as they can either fade away from advancing assault elements, or move up field to fire and take objectives. However, their traditional roll of sitting on an objective and shooting sure isn’t bad, either.

The Exarch upgrades are worth considering. Fast Shot is awesome, particularly with the Tempest Launcher. The ability to snipe models out of a unit or hit models out of LoS is very useful, and can make these units threats to a variety of models around the table top.

Buffs from units like Farseers can go miles for these guys. Twin linking, obviously rocks. But also, ignores cover from a power like Perfect Timing is huge for them as it makes them truly terrifying vs. MEQs.

Yeah, they are beast mode.

I have been considering eldar for a bit lol, especially with corsairs. and part of my army would consist of the Aspect Shrine Warhost thingie, with nothing but dark reapers. cause my plan is to make a corsair army that is different from most eldar lists lol.

Its hard to justify taking them in an aspect host over Warp Spiders and Fire Dragons, still a very potent unit if not a little expensive

I experimented with a 4 man unit in the aspect host. It really shined when I played against any type of bikes, but wasn’t as effective in some other matchups. I still liked taking them though.

In the UK meta these boys are huge, as it is generally a “how many warp spiders can I squeeze into a single list” game. Most tournaments here rule that they can do infinite warp jumps, so 3 S4AP3 barrage blasts is generally a decent choice to make them sad in the pants. A big GT late last year saw a list consisting of 30 warp apiders and 3 knights, that’s it…

I use an aspect host in most if my games. Usually consisting of either 4-5 Dark Reapers, 7-8 Warp Spiders and 5-6 Fire Dragons with Webway Portal, OR 2 units of spiders and Fire Dragons w/ WWP.

I have found both to be very effective. The Dark Reapers have been my VIPs in more than a few games.

So the exarch will shoot twice with emplaced guns as well?

Putting a min squad with an Exarch inside a plasma obliterator for only 320pts will shoot the massive blast at S7 AP2 twice from a BS5/6 model. It ignores any jink saves and is considered a primary weapon. I guess that’s one way to deal with pretty much all infantry.

Would being BS6 allow the exarch to re-roll the 1 when it gets hot?

Yeah, BS6 does provide a re-roll on Gets Hot.

An exarch manning an icarus lascannon is amazing vs fliers/FMCs

Imagine if you had an escape hatch. They could disembark and fire at a unit they didn’t originally have a shot on. Surprise!!!! Slow and purposeful is so good