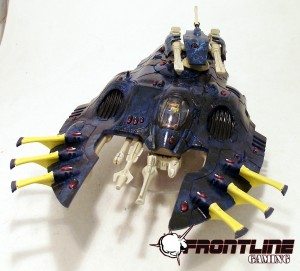 The Wave Serpent from the 6th edition Eldar codex came to embody all that critics would say is wrong with Games Workshop.

It was often an objective secured transport vehicle that was also the best gun platform and most survivable non-super heavy vehicle in the game.  You got all of that for the cost of a little more than a Thunderfire Cannon.  That was great for balance, right?  So does the current version of the Wave Serpent live up to the previous game breaking version?  Let’s take a look.  For more reviews and tactics articles check out Frontline Gaming’s Tactics Corner.

The Wave Serpent is a 12 model capacity transport fast skimmer vehicle.  It has BS 4, AV 12/12/10 with 3 HP.  Despite being the only dedicated transport option, in the Eldar codex it has only 1 access point at the rear and no fire points.  It can be taken as a dedicated transport by most of the infantry units in the Codex including Dire Avengers and Guardians. 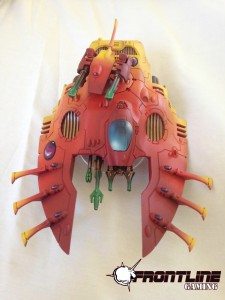 Serpent Shield: Easily one of the the most hated pieces of Wargear in 40k history,  The 7th edition version is significantly toned down from it’s rage quit table flip version.   Like before, the shield still reduces penetrating hits to glances on a 2+. The big difference is that now it only shoots a S6 2D6 cover-ignoring 24″ range onslaught once per game. Additionally if you choose to shoot the Serpent Shield you lose the ability to reduce penetrating hits to glances for the rest of the game.  This is still great at keeping your transport alive but it is no longer the offensive threat that dominated competitive tables.

The Wave Serpent also comes stock with  a twin-linked Shuriken Catapult and a twin-linked Shuriken Cannon.  You can upgrade the catapult to another cannon and/or replace the cannon with a twin-linked bright lance, twin-linked scatter laser, twin-linked starcannon, or a twin-linked Eldar missile launcher.  It can also purchase any item from the Eldar Vehicle equipment list. The standard load out and upgrade options give the Wave Serpent more firepower than a Razorback but it is hardly overwhelming.  Over all I would recommend running them stock or with a scatter laser and bright lance.  The added range from these weapons allow you to contribute to the fight in the backfield before jumping on objectives late in the game.

As a fast Skimmer the Wave Serpent can cover a lot of ground quickly which is nice for late turn objective hopping.  The other notable special rule is that a Wave Serpent can Jink for a nice 4+ cover save any where you are.  The jink saves synergies well with the serpent shield to make the Wave Serpent really resilient for an AV 12 vehicle. 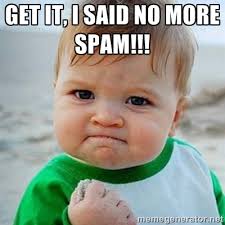 The Wave Serpent of 6th edition was a must take and was often spammed for competitive success.  With the toned down rules and 110 point price tag, you are not likely to see lists that features 6+ wave Serpents anymore.  That said, the 7th edition Wave Serpent is still an incredible troop transportation vehicle.

It is resilient and fast so it can deposit you troops where you want them very reliably.  You can take Wave Serpents as dedicated transports in the various Eldar formations that include units with that option.  Fire warriors in an Aspect Host do very well in a Wave Serpent, as the Wave Serpent can keep them alive in getting them close enough to unleash their melta shots.  Just make sure not to get to close to your opponent before you jump out to shoot as the Serpent Shield does not work in close combat and rear armor 10 is easy to crack even with simple crack grenades.  In an Eldar War Host formation, Wave Serpents are less needed to get around as you are able to run a guaranteed 6″ every turn but they can still move a unit all the way across the board in 1 round of movement. However, in the Aspect Host, they gain the advantage of the +1 BS for units that opt for that bonus, making them very accurate gunships.

Overall the Wave Serpent very solid transport for an Eldar army though you will now probably see fewer on the table with the rise of the next most hated unit in 40k: the Eldar Windrider Jetbike, or as they are more commonly called: Scat Packs!

I do love the serpent and think you would see more of them if scatterbikes weren’t so prevalent in this meta.

The Serpent is decent, but AV12 means it’s not that hard to crash it before it can do anything, leaving the passengers stranded. It’s hardly as fragile as DE transports or the like, but neither is it tough enough to consistently get things across the field in the face of enemy firepower, being on the bottom of the turn, etc.

In that regard, the change of Holofields (from +1 save to 5++) was actually more problematic than the “fix” to the Serpent Shield- being able to Jink for a 3+ was awesome, whereas having an unreliable save if you choose not to Jink is typically pretty middling (since the Shield prevents you from getting one-shotted by a lucky pen already.)

I read fire warriors as well and couldn’t quite place what felt wrong. A devilfish is basically a wave serpent right?

Sure, just less side armor, not fast, worse guns, lower bs, no built-in shielding. Other than that, essentially the same. [/sarcasm]

Yeah but it’s slightly cheaper so it’s totally worth it.

First, it is slightly cheaper; and second, it has the words “DON’T PANIC” inscribed in large friendly letters on its cover.

Westrider, in that case Ill take 5..

I actually kinda want to paint “DON’T PANIC” on any Devilfish I get now. Converted into Tau script, of course 😉